More than two years may have passed since SOMA first debuted on PlayStation 4 and PC, but as they say, “Better late than never.” Sure, the game just made its way to the Xbox One platform, but what matters is that it did at all, allowing those without access to PSN and/or keyboard and mouse services to play the well received horror game.

At its core, SOMA is a first-person survival exercise, with lots of walking and puzzles thrown in to keep the player thinking. Like Frictional Games’ previous efforts, it attempts to draw people in with its lifelike vantage point, while trying to make them fear what’s around the next corner. This is a bit of a different beast, though, given its somewhat unique, BioShock inspired setting; that being an underwater facility that spreads across a large portion of the Atlantic Ocean. One in which something has gone very, very wrong.

The PATHOS-II, as it’s called, was created as part of a project aiming to save humanity from impending doom. Of course, given its setting, it was also an aquatic research laboratory, as well as one that specialized in artificial intelligence and robotic construction. However, as is always the case with this type of narrative, systems that were put in motion for positive reasons ended up turning against humanity, and did so around the time of a catastrophic worldwide event.

Users control one Simon Jarrett, a Canadian citizen whose story begins in his small Toronto apartment. This particular character is a flawed protagonist, whose medical conditions have hindered him following a car accident that saw a good friend perish. As the lone survivor of said life changing event, Mr. Jarrett now lives with brain damage and a continual bleed. It’s this that pushes him to visit a strange laboratory at the urging of a doctor who says that his unique brain scanning methods could allow for a much clearer diagnosis.

SOMA opens on the day of the scan, as the protagonist awakens and begins to get ready for his appointment. A phone call with the doctor suggests that everything is on track, as do emails, but a forgotten response regarding work (at a bookstore) tell us that Simon’s memory isn’t what it used to be. It becomes more evident that something simply isn’t right when, upon arriving at the designated facility, he must let himself into both the lobby and the treatment room because there’s nobody there to greet or assist.

It’s following this scan that something weird happens, with the character waking up in a strange and never-before-seen environment, which is later learned to be the PATHOS-II. His body has changed, but his mind is still intact, and he has no recollection of getting there. All he has at his disposal, then, are his wits, his problem solving skills and the ability to run and hide.

After all, there is no way to attack that which resides under the sea in SOMA. All you can do is try to avoid the sentient and disturbing creations that walk and float throughout the base. This isn’t Outlast, though, so you won’t have to worry about hiding under beds or in cramped lockers and closets. The sneaking is less advanced, and actually isn’t as prevalent herein.

Truth be told, this is a game that is more about story and atmosphere than it is about monsters; so much so that the developers felt fine about including a brand new safe mode that has been patched into other versions. Through it, those who wish to only focus on the narrative can do so without fear of monster attacks, even if almost all of the game’s encounters are scripted and none happen to be too involved.

Therein lays one of SOMA‘s biggest problems. Although it’s touted as being very scary, it rarely got close to being frightening. Sure, there were a couple of moments where I was running for my digital life and felt some tension, but after a while my fear of what lurked around the next corner (and outside, during trips along the sea floor) mostly disappeared as I got used to how this campaign worked. I didn’t feel afraid or very unnerved, which disappointed me and made me pine for Outlast and Outlast II. 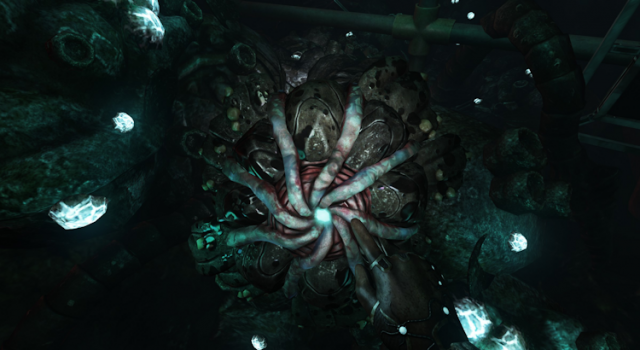 SOMA is more about puzzles than anything, which really hurts it and makes it so that its interesting and surprisingly expansive setting isn’t taken full advantage of. PATHOS-II and the Atlantic Ocean it resides in deserved better.

The general structure, then, involves exploring familiar looking bases and the computers that connect them. You’ll use these PCs to lock and unlock doors, restart generators, and run different systems. Additionally, computers must be used to activate the base’s mechanized travel devices, which include underwater zeppelins and other aquatic vessels. Most of the time turning them on ends up being the puzzle at hand, and specific instructions must be followed.

Those who scour the station’s extremities for every bit of recorded, written and emailed information will thankfully find lots of substance therein. What this title lacks in gameplay it substitutes in the form of a quality, interesting and well-written storyline that taps into our world ending fears. A lot of that depth is hidden in optional materials, though, meaning that those who search are rewarded most.

As far as visuals and audio go, the game’s Xbox One version is pretty tough to complain about. Although it’s not the best looking thing in existence, due to the odd dated texture and environments that almost always look similar, SOMA offers some solid visuals and isn’t marred much by performance issues. Its monsters, creatures and important assets are well detailed, and the sound design really assists both the narrative and the feel that the developers were obviously going for. More could’ve been done to make this thing scary, but what’s there is pretty solid throughout its 8 hour run time.

Thus, SOMA is a game that won’t appeal to everyone. It’s a methodical, slow burn of an experience, and one that doesn’t pay off as much (gameplay wise) as it should’ve. Still, there are things to like about it, especially if you’re someone who appreciates a good story. Just go in knowing that this is an uneven ride, and one in which it’s normal to feel both lost and confused.

SOMA (Xbox One) Review
SOMA is interesting and well written, but its gameplay isn't up to par. A reliance on boring puzzles, and a general lack of fear hurt this game and its somewhat unique setting.
Visuals71%
Audio73%
Gameplay52%
Storyline80%
The Good Stuff
The Not-So-Good Stuff
2017-12-26
60%Overall Score
Reader Rating: (0 Votes)
0%