Ubisoft has partnered with Mondo, a collective of artists known for their unique take on movie art, to create a special, limited edition version of Far Cry 5. This set, which they’ve called the Far Cry 5 x Mondo Limited Edition, is now available for pre-order in North America.

Featuring artwork inspired by the Project at Eden’s Gate, Far Cry 5‘s Mondo Limited Edition is designed to highlight the power that Joseph Seed and his followers possess in-game. With that goal in mind, the team has created something that they hope will appeal to the collectors among us.

This set, which is limited to just 4000 units, will include: 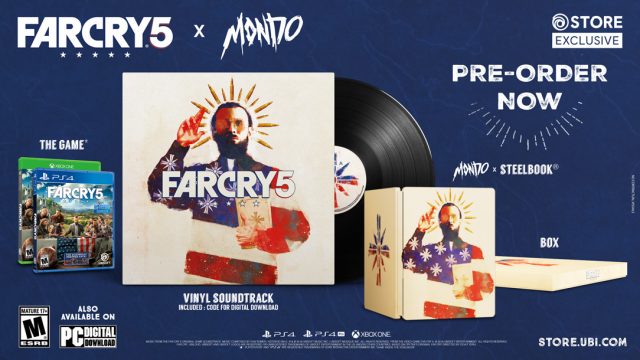 Those who’d like to pony up the $129.99 that is needed to acquire this special edition, can do so by heading to Ubisoft’s Store. There, they can submit a pre-order, and hopefully guarantee themselves one. Those who do will also guarantee themselves the unique Doomsday Prepper Pack and the Chaos Pack, which include a set of cosmetic and consumable items to be used as players lead the resistance against The Project at Eden’s Gate.

For Mondo, this capsule collection with Ubisoft was an exciting challenge. “Over the years, we have done pretty much everything related with film collectibles and this collaboration represents the next step: with gaming you’re lot more open, to interpret. It’s a bigger story,” said Jay Shaw, Creative Director of Mondo. “We are very happy to collaborate with an extraordinarily creative company like Ubisoft!”

Far Cry 5, and its Mondo Limited Edition set, will be released on March 27th, across the Xbox One, PlayStation 4 and PC platforms. Here’s a new trailer for it: