If hearing Avril Lavigne sing, “Hey! Hey! You! You! I don’t like your girlfriend!” makes you think of digital car wrecks then you’ve likely played Burnout Paradise at least once. That song, which is an anomaly as pretty much the only ‘modern’ pop tune on the soundtrack, has practically become synonymous with that game.

Although Burnout Paradise is now more than a decade old, it’s returned with a vengeance thanks to the remaster culture that exists in today’s video game industry.

Originally developed by Criterion, who created the series back in the early 2000s, Paradise is an open world take on the smash-focused racing that this franchise is revered for. Set in a modern looking city with Hawaiian influences, it’s a digital paradise for controller wielding drivers. Buildings may dot the landscape, but so do ramps, back alleys and super jumps, not to mention billboards that are just asking for car sized holes.

In a game that is all about speed and crashing (also known as takedowns), a story isn’t necessary, and Burnout Paradise‘s developers seem to have felt the same way. Thus, there’s almost nothing in the way of a narrative here. All you need to focus on is winning events and upgrading your license by doing so. Therein, the game’s only story — that of an invisible driver aspiring to become Paradise City’s next Elite license owner — sort of exists, but one must make up any wanted details.

The key terms here are ‘open world,’ ‘racing’ and ‘takedowns,’ because little else is of importance in what is very much an arcade racer. You start out with a damaged starter’s license, after being welcomed to the city, and are then thrust into its racing culture while behind the wheel of a junkyard wreck. To enter into an event, all you need to do is drive up to an intersection, park in front of or in-between the lights, and do a burnout by holding the brake and the gas at the same time.

Spread throughout the city and its neighbouring hills, cliffs and country, are 120 different events and their corresponding intersections. These come in several different flavours, including ‘traditional’ races, one-on-one duels, burning routes (time trials), road rage and marked man engagements. While the first three on that list don’t need much of an introduction or many descriptors, the last two do, so we’ll focus on them next.

Simply put, a marked man event is a game of cat and mouse as told by dangerous motor vehicles. Here, the player is the mouse and the computer takes on the role of the cats who wish it dead. This results in challenges wherein one must attempt to safely make it to a marked point before having his or her car totaled. Notice that I said totaled and not wrecked, because there’s a difference, especially in a game where damage is so common and can be instantaneously reversed by driving through an auto shop.

Road rage is next, and it’s these events that are arguably the most enjoyable part of this game. They’re simple, get straight to the point and don’t apologize for anything.

In these, one must attempt to get as many takedowns as possible, in order to reach a set goal. Objectives start at 2 or 3, then eventually ramp up to around 12, but it’s not difficult to get twice that during a two or three minute-long event. Hell, it’s even cathartic. Plus, it helps that the damage modeling is quite detailed, and that the takedowns, themselves, are very visceral.

By now, you’ve read the word ‘takedown’ more than once and may not know what it means. Put simply, a takedown is an offensive crash, or the motor vehicle equivalent of a hockey check. If an opponent is in your way, your best bet is to take him out by pushing him into a guardrail or column, which constitutes a basic takedown. Hitting someone from behind can also have this effect, especially is turbo is active while doing so.

Of course, as any series vet will tell you, these aren’t the only types of takedowns available to one inside of a Burnout game. No, there are several different variations, including grinding takedowns, t-bone takedowns, car/van takedowns (which involve using traffic to one’s advantage) and revenge takedowns. Needless to say, this is a very aggressive and adrenaline fueled racer, and one which creates a lot of digital scrap metal.

The thing about these takedowns, though, is that they don’t necessarily eliminate anyone from a race. They’re simply a way to take an opponent out of an event for a limited time, or set them back if you prefer that term. You’re not impervious, either, and will fall victim to quite a few, yourself.

Therein lays the basis of Burnout Paradise: competing in events and scoring takedowns, while attempting to win enough to earn your Burnout and Burnout Elite licenses. You’ll unlock cars as you progress, and will also see unique chassis dropped into the world as targets. When taken down during free roam play, they’ll become available for use at the city’s couple of junkyards.

It’s a fun, albeit somewhat simple formula. What’s important, though, is that it works and provides a good amount of entertainment, though repetition does seep in. A lot of this is due to the fact that many of the events (the races, especially) get very similar after a while, which is compounded by the fact that you’ll likely complete the same ones multiple times. Once you earn a new license, the map is reset (so to speak), meaning that every previously completed race, marked man, road rage or car specific burning route becomes new again.

The game’s repetition and occasional tedium is also affected by its destinations. You see, unlike most other racers, which present unique tracks or races with varied starting and ending points, Burnout Paradise makes you drive to one of several different locations ad nauseam. Thus, every race will begin by saying something like, “Drive Northwest to the observatory,” or, “Drive southeast to the baseball stadium.” These are just two of several destinations; a list that also includes a country club, a naval yard, a waterfront plaza, a wind farm, a ranch and the city’s coast guard HQ.

What keeps things somewhat fresh, though, is the fact that you can look for your own routes from point A to point B. This means back alleys, ramps and, the odd time, rooftops. It’s hard to get too creative, however, because opponents don’t hold any punches and one wrong turn can mean a loss – something that this game does not allow or validate in any way, shape or form.

Another thing that is different about Burnout Paradise is how it handles its navigation. You’d think that you’d be able to place a marker that would help guide you to a specific event or location, but that’s not possible. Also unavailable are route markers or any sort of path indicator outside of blinking turn lights and road signs that appear either on the top left or top right of one’s display. These, as you’ve likely guessed, indicate left or right turns that must soon be taken, and can easily be missed at the game’s almost dizzying speeds. When you unlock and use sports cars, you’ll be ‘flying,’ and will be so focused on avoiding traffic and other racers that you’ll sometimes miss your turn, fall out of the lead, then curse the game and have to hit restart. 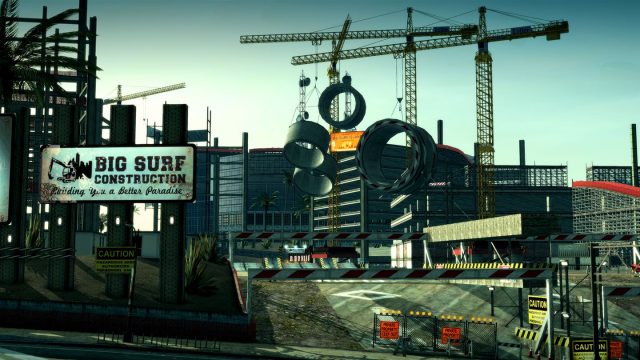 Of course, this is a remaster, and like the rest of them Burnout Paradise Remastered doesn’t skimp on including all of its game’s previously released DLC. This means that, upon installation you’ll have access to many additional vehicles in the form of legendary, toy and police cars, not to mention the motorcycles that were added into the core game years ago. Also included is Big Surf Island, a small landmass that was originally released as an expansion. It’s joined to the mainland by a long bridge, and offers several new districts, on top of more unique geography and additional billboards, smash targets and events. Keep in mind, though, that both the bikes and Big Surf Island have their own licenses, meaning that completing their events won’t count towards your Paradise City one.

Moving on, online multiplayer is also available to those with interest, although I had some trouble finding a ranked match when I tried. I was, however, able to enter into a player match lobby, which existed as online free roam. There, I was able to partake in challenges with several other drivers, including seeing who could get the most air.

Racing is, of course, also available online, but nobody seemed interested in it at the time.

Presentation wise, Burnout Paradise Remastered is a definite improvement over its 2008 predecessor, though it’s not a night and day difference and certain textures are still lacking. That said, the game looks pretty good, plays well and sounds great, with boisterous sound effects and a rather impressive soundtrack that hasn’t changed in 10 years. As such, one can once again look forward to driving to the likes of Guns ‘N Roses (‘Paradise City’), Alice in Chains (‘Would?’), Avril Lavigne (‘Girlfriend’), Seether (‘Fake It’), Faith No More (‘Epic’) and Brand New (‘The Archers’ Bows Have Broken’). That is, unless you’d prefer to race to one of the game’s many classical options, or its impressive list of originals from from the titles that came before it.

I would, however, be remiss if I didn’t mention that there’s a bit of controversy surrounding Burnout Paradise Remastered. Some message boards, like reddit and Resetera, have housed their fare share of talk about glitches, crashes and other performance problems, but most reports centre upon the PS4 version of the game. Meanwhile, I completed the Xbox One version, and didn’t encounter any issues. This game ran very well for me on our Xbox One X, and looked good while doing so, but I feel for those who are encountering crash-related bugs.

Burnout Paradise is also backwards compatible on Xbox One, and has received a patch that improves its presentation and performance on the Xbox One X. Thus, if you already own the original version of the game, you should question whether you need to buy it again.

At the end of the day, though, I had fun returning to Criterion’s take on a wreck filled Hawaiian city. Burnout Paradise Remastered may not be perfect, and may show some age, but there’s no denying that there’s a lot of fun to be hard here.

Burnout Paradise Remastered Review
Burnout Paradise Remastered isn't a perfect reworking, but it does a good job of bringing this crash filled, interactive opus onto modern hardware. The core gameplay remains fun, too, despite showing some age and dealing with repetition.
Visuals76%
Audio83%
Gameplay78%
The Good Stuff
The Not-So-Good Stuff
2018-03-20
79%Overall Score