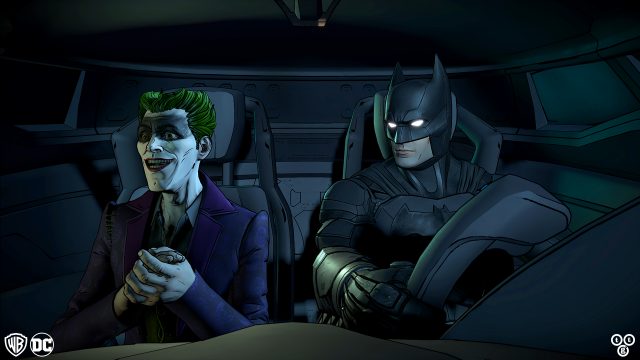 Warning: This review will contain spoilers for the previous episodes of Batman: The Enemy Within, the second season of Telltale’s series based on the Caped Crusader.

The last time we donned Batman’s cape and cowl, we stood at mayhem’s door. The Pact — a group of Gotham City’s most notorious criminals — had done its job with Bruce Wayne’s undercover assistance, and Harley Quinn was threatening carnage at the edge of one of the city’s biggest bridges. All that stood in mayhem’s way were Batman, John Doe (aka. The Joker) and Amanda Waller, the leader of a shadowy organization.

How things played out at the end of that fourth and close to final episode impacts where we are today, with Waller hunting down the virus that was uncovered earlier. She, with help from souped up and manipulated members of The Pact, is hellbent on acquiring it for potentially nefarious means. Meanwhile, Bruce Wayne, his crime fighting alter ego and his ‘friend,’ John Doe, are working to prevent that from happening. It’s not, and won’t be easy, though, given that Waller has sent her goons into the fray with shock collars and electrical guns.

Things pick up just prior to the start of a fight that will help set the tone for this second season’s final episode: ‘Same Stitch.’ As Batman, players must navigate from one side of a street to the other, in an attempt to get into an abandoned plant. After doing so, he’s met by John, Harley and Waller’s agent cosplaying goons, who will stop at nothing to get their hands on their dangerous target.

What ensues is a battle that will force Bats to make an important choice, which really sets things in motion by showing who the player is aligned with most. Things just get worse from there for our Caped Crusader, who’s bruised, beaten and even injured, and must seek medical help from his iconic butler.

The rest of ‘Same Stitch’ revolves around playing political chess and attempting to keep the virus out of Waller’s hands. How one deals with everything that comes up will decide John Doe’s mental fate. Does he become a maniacal version of the Joker, or something less severe? There’s a fine line between craziness and sanity here, and John Doe is straddling it like a trapeze artist.

Same Stitch is noteworthy not just because it’s the final episode of five, but because it introduces some pretty important choices that have severe consequences. Based on how they play things, players risk Batman losing one of his most trusted allies, not to mention sending the Joker into a maniacal frenzy. This creates the potential for a rather epic showdown between the two.

Along the way, other relationships are tested and need maintenance, including the one between Bruce and Lucius Fox’s daughter, as well as the one that he and Catwoman share. Jim Gordon also plays an important role, and the episode risks altering Robin’s canon.

Though it struggles with pacing issues, and performs worse than most of the previous episodes (at least during its opening segment), this is a good way to close out the second season of Batman: The Telltale Series and perhaps even the series, itself. Pretty much all of the series’ loose threads are tied up  in both serviceable and appreciable ways. This isn’t a masterful finale, but it’s a good and well above average one that does everything it needs to and goes slightly above the call of duty.

Then again, if you’ve been playing Batman: The Telltale Series and Batman: The Enemy Within since the start, why wouldn’t you see how things wrap up by playing this finale? It’s just a plus that it’s of quality and does its job pretty well.

Batman: The Enemy Within - The Telltale Series: Episode 5 - 'Same Stitch' Review
Batman: The Enemy Within comes to a solid and quality end with 'Same Stitch,' its fifth and final episode. If you've been following along, you should be happy with how this one ends.
Visuals73%
Audio79%
Gameplay75%
Storyline78%
The Good Stuff
The Not-So-Good Stuff
2018-03-29
76%Overall Score
Reader Rating: (0 Votes)
0%