Molly’s Game is a film that more or less came out of nowhere. It is based on a 2014 book of the same name (or at least that started with the same name but added “The True Story Of The 26-Year-Old Woman Behind The Most Exclusive, High-Stakes Underground Poker Game In The World.” I’m going to go ahead and say it was a good call to leave that extended title off of a movie poster. Molly’s Game works just fine. Nevertheless, it’s a title much of the moviegoing public hadn’t heard before in either form. It simply materialized right before Oscar season, as great films sometimes do.

Once you dig into it though, it was actually a very interesting release. The book upon which it was based was a bestseller, and the adapted screenplay was written by the great Aaron Sorkin – who, incidentally, also took his first turn in the director’s chair. We’ll get to his direction a little later on, but for his part Sorkin has been candid about the challenge and pressure of directing his own script. It sounds as if the story simply felt right for a first attempt, and if I’m the one judging, the result is quite impressive. Molly’s Game was one of the finest films of 2017.

Characters are among the most interesting elements of Molly’s Game – which, really, should be the case in most every movie, but too often isn’t. Looking specifically at great movies about gambling though, there’s actually a surprising lack of iconic characters. Given that so many gambling themes involve personal crises, personal skill, personal decision-making, etc., you’d think we’d have some fairly vivid characters from this genre by now. But can you remember the name of the head student blackjack player in 21 without looking? Do you call Rounders the best poker movie ever made but struggle to recall what Ed Norton’s name was in it? If so, I’m betting you’re not alone. Even worse, there really aren’t too many good supporting characters in these films to speak of at all. 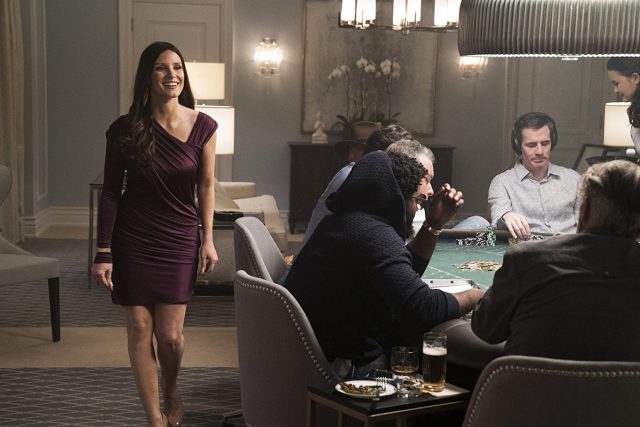 Granted, Molly’s Game has the advantage of a titular protagonist. Going beyond this however, it’s a movie filled with interesting characters. Molly herself, played by Jessica Chastain, is a devastatingly sharp, overachieving workaholic, simultaneously more human and more cold-blooded than most of the people around her. Kevin Costner plays Molly’s demanding and imperfect father, and though he’s really not on the screen very often he arguably turns up for the best scene of all toward the end, and he manages to make the father-daughter relationship a core aspect of the drama. Idris Elba is wonderful as the attorney who represents Bloom when the government comes after her for running an illegal poker game, and numerous supporting characters – mostly playing celebrities whose actual names, in the true story, are not revealed – make for a nice background ensemble.

Most notably, I thought it was the best cinematic effort yet from both Chastain and Elba. Their characters could have been dry and generic in a lot of other hands, but were both highly enjoyable here.

The plot of Molly’s Game is actually pretty straightforward, even if the story itself is remarkable. As a girl, Molly Bloom was a prodigy in downhill skiing, bound for likely Olympic competition before injuring herself in a qualifying tournament. Following this tragedy, despite excelling in school, Bloom moved out to Los Angeles where she ultimately took a job as an assistant to an anonymous celebrity. Ultimately she was asked to help him run his underground poker game (with other celebrities who aren’t named – though some are believed to be known). And from there, it all takes off. Molly has a gift for the work, eventually starts to run her own game, moves to New York to do the same, and ultimately ends up accidentally (and perhaps carelessly) mixed up with a few bad people who crash the whole enterprise. The conclusion is a court case, though I won’t reveal how it go
es.

At two hours and 20 minutes, this straightforward plot would likely have felt cumbersome if worked through by a lot of other writers or directors. Sorkin, as always, deserves credit however. While the writer is sometimes criticized for “Sorkinisms” and having a pretentious, intellectual style, the wit of his dialogue is legendary even among actors. And it’s what keeps this plot moving along, such that the movie doesn’t feel nearly as long as it is.

Dialogue aside, Sorkin also did well to break the film down into a non-linear shuffle that actually makes sense. This is a trick employed far too often by writers and/or directors these days, and often it simply seems contrived. This, for instance, is what got Christopher Nolan’s 2017 war film Dunkirk so much criticism (though I’d personally argue Nolan’s work, too, was effective). Here, however, we mostly see Molly speaking to her attorney, with different chapters from her life leading up to that point inserted as needed. It all fits nicely, it’s never confusing, and it’s a great deal less boring than it perhaps might have been.

I’ve already spoken to direction somewhat, but to go a little bit further here it’s worth noting that included in Sorkin’s comments were allusions to a desire to write about a glamorous world. Sorkin says he wanted to depict a story set against the backdrop of glamour, wealth, Hollywood, etc., but focusing on the nuanced emotional story about Molly Bloom. And when you hear him express these intentions (noted in the link above), the film is all the more impressive.
That’s because what Sorkin describes is exactly what we get when we watch Molly’s Game. There is always a feeling of decadence, wealth, and in a subtler way, danger lingering over the movie. Though many of its scenes take place in back rooms or exclusive hotel suites, rather than jingling, golden Las Vegas lounges or in the rich studies of Hollywood mansions, there is never an illusion that wealth and celebrity aren’t in play. We feel almost as if we’re peeking in on a world that only exists for the rich and famous, much like Bloom herself almost undoubtedly felt in the beginning.

The aforementioned non-linear organization and spacing of the film are also very effective in taking us on a ride with Molly Bloom. While she effectively (though not entirely literally) serves as a narrator, the highs and lows of her story are experienced rather than told. That is to say, we know she got to the end – she’s telling us (and her lawyer) about it, and she’s almost surprisingly calm. But we go through the ups and downs of getting there with the same level of anxiety and surprise you might feel going back through some of your own most dramatic memories. It’s all very cleverly done by Sorkin.

There’s not a whole lot to say about the music and soundtrack of Molly’s Game. But as is typical of Sorkin-written films – most notably his Oscar-nominated The Social Network – a fairly understated soundtrack goes a long way. If you’re a fan of his work, think of this as far more akin to his films than his TV shows, which tend to use louder and less subtle themes (as in West Wing and The Newsroom, for instance).

Here too there isn’t too much to say, because this isn’t a movie built on visual effects. There’s not a ton of action (though the skiing scenes early on are shot in a very compelling manner that almost makes you want to tune in to the Winter Olympics). And really, there aren’t a lot of particularly dramatic sets to consider either.

What is quite effective visually however is the use of light to create lounge-like atmospheres in poker rooms from LA to New York. As mentioned we don’t see celebrity mansions or special poker rooms in Las Vegas. We see hotel rooms converted for poker nights, or back rooms at bars, and relatively dim lighting throughout helps us feel the atmosphere of those rooms. That said, it’s not a remarkable film from a visual standpoint specifically.

As you’ve no doubt realized I was impressed by this film. It’s yet another example of Sorkin’s brilliance with a pen, and his characteristically witting, fast-paced script does a great deal to elevate the story.

I can’t help feeling that in other hands Molly’s Game would have been unexceptional, if not simply boring. The story is an interesting one, but not one that was really made for screen – at all. Sorkin makes the most of it and then some, however, both as a writer and as a director. And he happens to be aided by some really outstanding performances that didn’t get enough attention last year.