The collectors among us have been waiting to find out what types of goodies they’ll get if they go for the more expensive versions of Red Dead Redemption 2. Well, that particular wait has come to an end today, with news of the game’s several different editions, as well as its pre-order bonuses.

Those who pre-order the much talked about western will entitle themselves to two different bonuses, the first of which comes in the form of the Outlaw Survival Kit. Like its title suggests, this digital addition will offer health items, Dead Eye replenishments and more. This pack will be accompanied by the “iron-grey coloured Ardennes War Horse,” which is a more reliable horse that offers additional courage and stamina.

If you pre-order digitally, you’ll be entitled to a cash bonus for the game’s story mode. It’s said that this will give you enough to buy a weapon, some food, a treasure map and more. Those who go this route will also find themselves gifted with bonus GTA$ for GTA Online, so long as they do so before July 31st.

*Please note that all prices are in American dollars

Moving on, the $99.99 Ultimate Edition will up the proverbial ante by offering bonus multiplayer content, in the form of rank bonuses, access to additional weapons, special outfits, a Black Chestnut thoroughbred and a survivor camp theme. 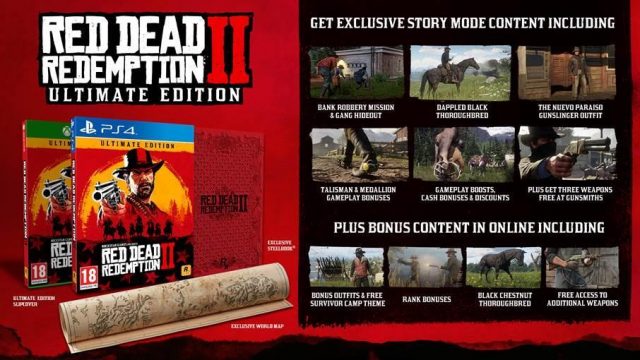 The most prestigious of the bunch will be the $100 Collector’s Box, which exists to entice physical collectors into paying more for collectibles they can touch. Its offerings will include “outlaw essentials,” like a metal tithing box, 12 cigarette cards, RDR2 themed playing cards, a Wheeler, Rawson & Co. catalogue, a treasure map, a six shooter bandana, a pin set, a collectible challenge coin and a double-sided puzzle. 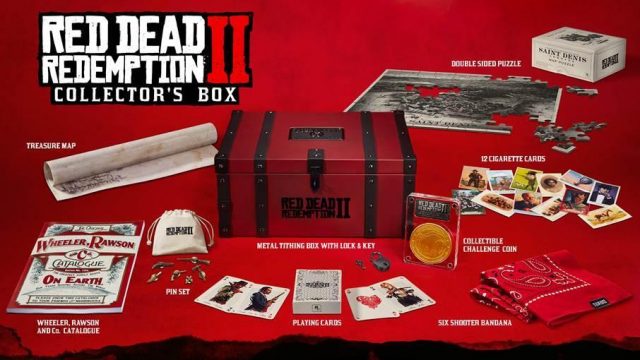 What’s silly about the above is that, if you decide to shell out one hundred American dollars for the aforementioned Collector’s Box, you will NOT get a copy of Red Dead Redemption 2. That will cost extra, depending on which other version you buy.

Red Dead Redemption 2 will send us back to the wild west on October 26th.