As human beings, we’re both blessed and cursed with the knowledge that we will all, at some point, die. This fact, which comes with zero details and nothing in the way of a countdown clock, sits inside of our minds and occasionally comes out to eat at us. Some are fascinated by it, while others are more afraid of it than anything else. This is just another way in which we are all different.

Although we all feel differently — to certain degrees — about the day on which we’ll draw our final breaths, our society as a whole is fascinated by the idea of death. It shows through our movies, our holidays, our vocal discussions, and our literature, among other things. This, after all, is a topic with no clear answers, because nobody truly knows what comes after death. Is there an afterlife, or nothing at all? Do Heaven and Hell exist? Or is religion really just a false hope? On top of that, what will bring this world to its end, and when will it occur?

These thoughts and internal struggles, especially those pertaining to the aptly-titled apocalypse, permeate throughout Paul Tremblay’s latest novel, The Cabin at the End of the World. Granted, it’s the idea that on one random day our earthly lives may come to an end due to cataclysmic events of unknown origins that is really at the heart of the book.

Following in the footsteps of A Head Full of Ghosts, Tremblay’s homage to horror movies like The Exorcist, and Disappearance at Devil’s Rock, which combines mystery and the supernatural, The Cabin at the End of the World is a book unlike many others. It is as shocking as it is gripping, and as thought provoking as it is scary. Simply put, it’s something that you won’t soon forget.

Things begin on a bright summer day at the edge of a New Hampshire lake. It’s there where we meet a nearly eight year-old girl named Wen, who’s enjoying her vacation at an aging red cabin in the woods. As studious as she is imaginative, she’s set out to catch grasshoppers in the cabin’s front yard, for the purposes of studying their movements and chronicling their health. Through this pursuit, she feels that she will be able to learn how to help animals, which is what she sees as her life’s calling.

Wen isn’t alone, of course, and has come to this cabin near the Canadian border with her two adoptive fathers, Daddy Eric and Daddy Andrew. She uses their first names to tell them apart, and seems to love each one (and their different personality types) equally. Andrew, whose hair is long to hide an ugly scar that adorns the back of his head and neck, is the fun loving and more carefree of the two. Meanwhile, Eric, whose bald head is a stark opposite to his partner’s long locks, is a worrier who doesn’t like his adopted Chinese daughter to leave his sight. This is a special day, though, because the two dads have decided to give Wen more freedom, and have agreed that unsupervised playtime will be good for her so long as she runs inside and alerts them to any animal larger than a squirrel.

It’s during this first chapter where a beautiful, peaceful and idyllic day begins to change into a nightmare, after a hulking young man named Leonard walks his way down the deserted dirt road and approaches the girl who’s playing in front of her family’s rented cabin.

Leonard isn’t alone, either, and though he tells Wen he’s her new friend, there’s something off about him that is proven when three more people appear at the edge of the driveway. Dressed in almost matching attire (jeans and buttoned shirts of different hues), they look very similar to Leonard although there’s one major difference: the others are carrying handcrafted weaponry that is straight out of a nightmare. They look this way because they are, with each wooden staff featuring at least one different type of rusted damage dealer, be it a curved blade, the repurposed claws of a metallic gardening tool, or the rusted head of a sledgehammer. 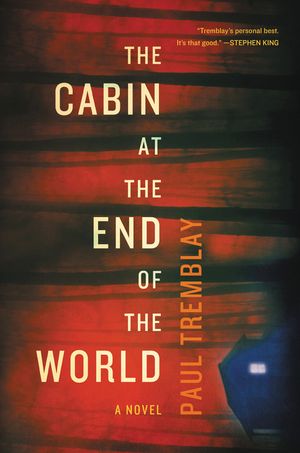 Beginning with the feel of a movie like The Strangers, The Cabin at the End of the World has some interesting depth to its 370 page story. This is because there’s more to this creepy and menacing group than meets the eye. They come bearing a message about the foreboding apocalypse, and need this isolated family’s help to (hopefully) stop it in its tracks.

What follows is a dark and disturbing story that mixes the apocalypse with themes of both religion and violence, not to mention home invasion. Little more can be said, though, because this is a tale that is easy to spoil. Just be warned that once you start, you won’t be able to pull yourself away from the almost surreal words that pop off of its pages.

Although A Head Full of Ghosts had a good creep factor to it, and Disappearance at Devil’s Rock featured an interesting mystery with some intriguing supernatural elements, The Cabin at the End of the World takes things to a whole new level in terms of the surreal and the grotesque. It is not for the squeamish, and it rewards those who like their horror to be bloody in addition to disturbing. In a way, it’s like a much more shocking version of Funny Games, with an apocalyptic and grotesque twist. It drags slightly, but even then it’s hard to put down or take one’s eyes off of.

Don’t get me wrong, though: The Cabin at the End of the World is not a non-stop festival of gore. This is, at its heart, a very thought provoking book that taps into our obsession with the apocalypse, and the idea that it could be stopped by regular people. Some of its visceral imagery may turn stomachs, but most of the book exists as an interesting character study set within a messed up home invasion of a premise.

Throughout this novel, the writing is quite strong, and makes good use of deep metaphors and similes. It also provides a lot to think about and ponder, which is something you’ll likely continue to do long after reaching its conclusion. There are some grammatical errors to be found, as well as a couple of spelling mistakes that made their way into this first edition printing, but nothing major. The first edition of Disappearance at Devil’s Rock, which I finished reading a couple of weeks ago, had a lot more errors. This novel is edited a lot better than that one was, and reads better than it did as well. Of course, it’s very likely that the errors that appeared in its predecessor were ironed out in later printings. It’s also not uncommon for first editions to have the odd spelling issue.

This isn’t your typical ‘chapter book,’ either. The entire thing is separated into three or four different parts, and throughout it there are less than ten chapter breaks. As such, most ‘chapters’ are lengthy, and they occasionally switch from one character’s perspective to another’s. The final one is told in a weird way, as well, because it makes use of both first and third-person perspectives, which reads oddly. The ending, itself, also could’ve had more depth to it.

With all that having been said, it’s easy to recommend Paul Tremblay’s latest effort. The Cabin at the End of the World is not only interesting and hard to put down, it’s also thought provoking to the extent that it will take up residence in your mind, using both intrigue and squatter’s rights as excuses to stay there.

**This review is based on a hardcover copy of the book that we were provided by its publisher.**