It’s a bold new era for Doctor Who with the kick-off of Series Eleven! Not only is there a new showrunner in place, with Broadchurch showrunner, Chris Chibnall replacing previous showrunner, Steven Moffat with the conclusion of Series Ten last year, but we now also get to witness the series’ first-ever female lead, that being Broadchurch alum, Jodie Whittaker, who is now succeeding Peter Capaldi as the all-new Thirteenth Doctor! Whittaker brings another especially fresh, exciting new take on The Doctor in her debut episode, “The Woman Who Fell to Earth” as well, well beyond the gender swap. This appears to quickly illustrate that Doctor Who is in good hands with its new leadership and new star alike, presenting a slightly altered style amid a pretty compelling earthbound alien mystery.

As far as regenerations go, Thirteen seems to have had a smoother one than normal, at least by New Who standards. She’s a little mixed up in this episode, to the point of not realizing that she’s become a woman until one of the new leads points it out to her, but she definitely seems more quick and on-the-ball than the past several Doctors did in their debut roles, even as her personality is just beginning to come together. The early shades of Whittaker’s Doctor persona appear to hint that she’s very bubbly and jovial, a far cry from Peter Capaldi’s more stern and cranky Twelfth Doctor before her, balancing that out with a slightly bossy disposition, but one that also carries the same deep love and appreciation for humanity as her predecessors. She’s only starting out in the role, but so far, Whittaker slips into the persona of The Doctor like a glove, with her gender being appropriately inconsequential in the end, and her performance quickly selling her as a very promising new Doctor on her own merits, thankfully avoiding the feeling of making the series’ first female Doctor into a dumb gimmick. 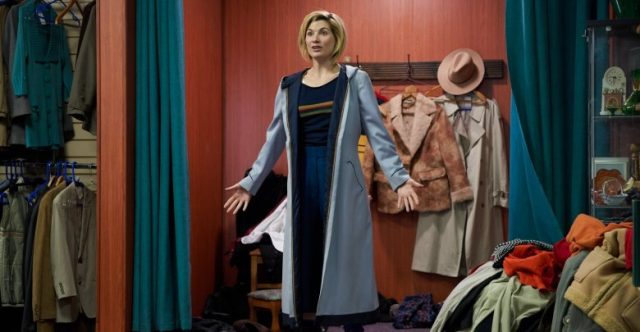 Another big change with the show comes with the new companions. Yes, companions, plural. Rather than finding a new young lady to drag along on her adventures, The Doctor instead bumps into a small family and a police officer that gets called to the scene, all of whom simply follow her around in an effort to save themselves, after they run afoul of some ‘DNA bombs’ that threaten to melt them all if they’re not disarmed. Our proper new companions are: Ryan Sinclair, played by Tosin Cole, a lost nineteen-year-old young man with a coordination disorder that is brave, if also a bit reckless; Yasmin Khan, played by Mandip Gill, a frustrated young policewoman-in-training who is charismatic, intelligent and eager to be taken seriously; And finally, Graham O’Brien, played by Bradley Walsh, an elderly cancer survivor who is a bit cranky and impatient, but has a worldly sense of charm and humility that grants him especially potent sensitivity and wisdom. All told, it seems to be a pretty good ensemble, and I look forward to seeing more from it over the next several weeks. Ryan and Graham also happen to be related by marriage, as a point of interest, since Graham married Ryan’s grandmother, Grace, played by Sharon D. Clarke, a few years after Ryan’s mother passed away. This does end up taking a tragic turn later however, since I suppose that five is a crowd. Sorry, Grace.

The need to establish so many new companions definitely creates a bit of a plodding pace in the early stretch of the episode, which is one of the only noticeable issues with it. One major switch from former Doctor-debuting episodes in fact is that you don’t even see The Doctor at all until about a third of the way into the episode, when she suddenly falls through a train roof (and is somehow unharmed?), directly following her regeneration at the end of the Series Ten Christmas Special, “Twice Upon a Time” from last year. With her TARDIS having vanished, the Thirteenth Doctor is left to try and solve the mystery of a mass of electrically-charged tentacles that appear to be flying around Sheffield, where she just so happened to plummet into the alien-afflicted train. After the alien causes a train driver to die of shock (metaphorical shock, surprisingly), The Doctor speculates that an alien battle might be about to be waged on Earth, and while she doesn’t know her name, she’s intent on stopping it, bringing along her new companions right upon meeting them! 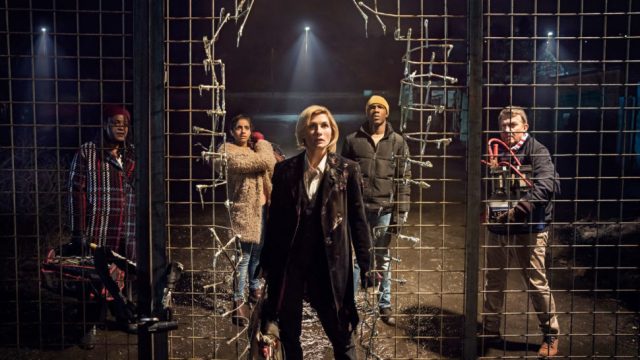 As you can imagine with an ongoing regeneration process however, The Doctor is still a little out-of-sorts, and it turns out that her melodramatic prediction was actually incorrect. Upon further inspection, the tentacle mass is actually a tracking tool used by an alien hunter named Tzim-Sha (whom The Doctor mistakenly calls, “Tim Shaw” several times, in a bit of a running gag), of the Stenza race, a band of aliens that hunt humans for sport as a rite of passage, taking their teeth as trophies. After Tzim-Sha claims another victim, the brother of a little girl that was previously killed by a ‘visiting’ Stenza many years ago, The Doctor gets to work on a plan to boot Tzim-Sha from Earth, despite being heavily outgunned, and missing her Sonic Screwdriver. This ends up barely mattering however, since she just quite literally forges a new one (complete with, “Sheffield steel”, i.e. spoons), and uses it to start tracking Tzim-Sha to a crane, where his target happens to work as an operator.

The climax of the episode is actually pretty spectacular for an earthbound Doctor Who episode, shirking the expected special effects emphasis to instead focus on more handmade stunts, and it actually works pretty well when it comes to creating a thrilling showcase of just why the Thirteenth Doctor is a force to be reckoned with! After a daring climb and some quick thinking, The Doctor’s adrenaline finally reminds her of her identity, but that’s not the best part! Turns out, The Doctor disarmed the DNA bombs with her Sonic Screwdriver off-screen, and re-wired them with the tracking device to transmit into Tzim-Sha. After Tzim-Sha refuses to leave Earth, he accidentally activates the bombs, and is forced to flee by teleporting off the planet. It’s a quick, clean and clever Doctor plan, and it feels very true to the character’s resourcefulness and cleverness, even when The Doctor seems like he/she is in an impossible situation.

It’s not all celebration though, as Grace does end up dying while trying to protect Ryan, Yas and The Doctor, being shocked and falling from the crane while disarming the tracking device that threatened to electrify them. There’s actually a pretty touching funeral sequence afterward with Graham as well, wherein he comes out about being a cancer patient that’s in remission, and re-discovering his love of life through Grace, whom he feels should have lived instead of him. Even in meeting Graham for the first time here, he quickly establishes himself as a very different Doctor Who companion, namely an older one that is in his twilight years, and is faced with the idea of life having passed him by already. The Doctor has always preferred to hang out with young, plucky companions, and while Ryan and Yas still fit that bill, it’s an interesting, yet surprisingly successful experiment to see how an older person would react to being around The Doctor for an extended period of time, and getting the opportunity to travel with her indefinitely.

Doctor Who has always been a franchise that celebrates change and looking to the future, and that energy continues to flow through this soft reboot of sorts for the series. “The Woman Who Fell to Earth” stands tall as one of the strongest season premieres and Doctor debuts that New Who has to offer, proving that the show’s all-new female Doctor incarnation hasn’t lost a step in the slightest, and that the character still has all of the same appeal, charm and charisma as any other Doctor before them, regardless of which gender they currently are. The experimental new approach to the companion trio also seems to be working pretty well so far, with each of the three new companions providing a balanced mix of disparate backstories and emotions that are bound to keep developing and paying story dividends as Series Eleven proceeds on, considering that The Doctor accidentally zapped them into space with her after resuming the search for the TARDIS in the episode’s final seconds. So far, new showrunner, Chris Chibnall appears to be providing a great dose of fresh blood and inspiration to the franchise, while also being careful not to betray what makes it special. Most importantly though, Whittaker’s Doctor also hits the ground running with a standout first impression, and I have to say that I’m highly anticipating her next adventures with her new best friends!

Doctor Who 11.1: "The Woman Who Fell to Earth" Review
Doctor Who kicks off a bold new era with a standout mystery, a lovable new Doctor and a trio of promising new companions this week, setting the stage for a very exciting new slate of adventures!
THE GOOD STUFF
THE NOT-SO-GOOD STUFF
2018-10-09
93%Overall Score
Reader Rating: (0 Votes)
0%