The Walking Dead, much like its sister series, Fear the Walking Dead, is undergoing something of a soft reboot in its newest season. With the, “All-Out War” comic story adaptation now done and over with after Season Eight, Season Nine begins with a pretty considerable year-and-a-half time jump, bringing us to a point when the communities of the show are starting to rebuild and repair their relationships. The Hilltop is thriving under Maggie’s leadership, Alexandria has rebuilt its walled housing and returned to stability under Rick, Oceanside has rejoined the other communities, and The Kingdom is once again confident and strong under a newly-empowered King Ezekiel. Even the folks at Sanctuary have fully laid down their arms and have embraced working with the other communities toward a better tomorrow. All told, The Walking Dead’s TV universe looks as happy and optimistic as it’s ever looked at this point!

This is immediately engaging and refreshing, since The Walking Dead has too often felt stuck in a rut within its TV canon lately, even with all of the excitement from the war against Negan and the Saviors throughout last season. The Walking Dead’s TV adaptation had nonetheless sunk into the same old depressing, plodding loop for several years before now, which is why it’s great to see the show trying something new, and decidedly more uplifting. This renewed direction and sense of energy manages to work very well throughout this episode, resulting in a pretty strong Season Nine premiere in the aptly-titled, “A New Beginning”, one that manages to make The Walking Dead fun to watch again, between more upbeat dialogue, a revitalized sense of purpose, and a new way to look at characters that had previously slid into tired, repetitive story arcs. Between a new showrunner, some awesome new graphic novel-esque opening credits, and refreshingly brighter cinematography, it seems like some fresh blood is doing The Walking Dead a lot of good for the start of its ninth season! 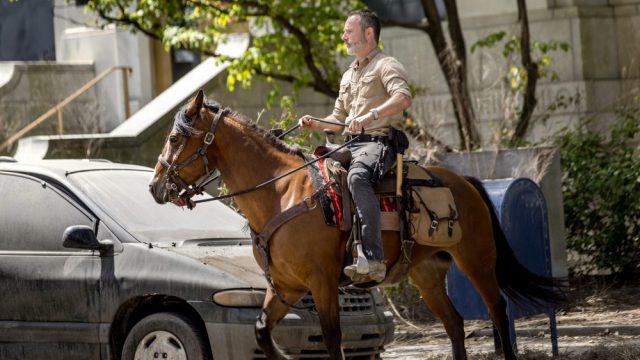 Of course, the more things change, the more they stay the same in certain other respects. “A New Beginning” still features plenty of the same recognizable elements of the show, including some walker clean-up, and an extended run through a ruined Washington, D.C. to hunt for seeds, which Anne, now shedding her former ‘Jadis’ identity, is leading the communities to. It seems like gasoline and guns have since become a lot more scarce after the time jump as well, resulting in a cool new focus on horseback combat and melee weapons, which helps to give the world of the Walking Dead TV series a bit more of a distinct identity in the ever-crowded world of zombie apocalypse media. This entire run through Washington made for a great showcase of how The Walking Dead is trying to combine classic zombie tension with a heightened sense of optimism and diplomacy, in fact. There is a particularly great sequence here wherein members of several communities have to try and get a heavy steel wagon out of the museum where the seeds are, in an effort to pass it off to the struggling Saviors. This involves moving the wagon over a glass floor, which just so happens to break right when Ezekiel is going over it, leading to him almost getting eaten by a horde of walkers underneath, were it not for a rope protecting him! It’s a little unbelievable that Ezekiel somehow didn’t at least get bitten here, since he’s very clearly grabbed by several walkers that can quite evidently reach him, but at least this made for a decent way to lead into the revelation that Ezekiel is now in a romantic relationship with Carol, even if the trailers also liberally gave this fact away beforehand.

The way that these communities are starting to interact and work out their own social and political needs alongside one another is another especially big highlight in this season premiere, especially as we see that there is some brewing tension festering under the surface of all of the evident prosperity. Daryl is trying to lead the Saviors into a new, Negan-free era of community and partnership, but is clearly unhappy doing so. Maggie prevailed over Gregory as Hilltop leader in a classically democratic election, but the citizens who are unhappy with her leadership are starting to make their voices heard. Finally, Rick is leading Alexandria into its best era ever, but some of the other communities are starting to question whether Rick has too much control over the other communities’ decisions, after becoming revered as the hero who brought down Negan. There’s just enough politics explored here to avoid it becoming too overbearing, and this immediately sets the stage for what should hopefully be an interesting front half to The Walking Dead’s ninth season this year, even if that whole anti-Rick conspiracy tease with Daryl, Maggie and Jesus in the Season Eight finale appears to have been dropped without consequence, at least at this point.

A huge chunk of the drama in this episode also comes from one of the Hilltop citizens, Ken, getting himself killed on the way back from Washington, since he didn’t want his horse to be eaten by walkers. This is sort of an interesting challenge for Maggie, who must face the boy’s parents afterward, both of whom blame her for Ken’s death, even though his demise was very clearly his own fault. Ken does exist in the universe of the Walking Dead comic books as well, but even there, he was basically just a throwaway character that quickly died, in a volume of the comics that is also named, “A New Beginning”, in fact. This is why the episode trying to squeeze so much pathos and emotion out of Ken’s death ultimately rings a bit hollow. We don’t know this character. He was introduced in this episode simply to be killed off, and lead into this trouble with Maggie. We can’t feel sorry for a character we don’t know, and whose relationship to Maggie or anyone else was never truly established beforehand. If it was Enid or Jesus who died, for example, these mourning scenes would have far more impact, rather than just feeling like they’re taking up space in an episode that has a lot to establish with the new world order.

Fortunately, even if the drama around Ken sometimes tends to drag, it at least ultimately leads to a pretty good payoff, particularly if you haven’t read this same storyline in the Walking Dead comics. Gregory, being the weasel that he is, tries to exploit Ken’s death to motivate Ken’s father to assassinate Maggie, which only leads to Enid getting injured, and Gregory getting caught. Maggie is nearly stabbed by Gregory after confronting him, but manages to overpower and subdue him. Deciding that she needs to assert her leadership properly in a subsequent talk with Rick, Maggie declares that Rick needs to start being serious about following the Hilltop’s lead, before the scene shifts to nighttime, and the entire Hilltop, along with Rick, Michonne and Daryl, are all gathered outside. Maggie tells the Hilltop’s citizens that Gregory’s actions must be punished to prevent further attempts to upend the leadership of the community, and, to the horror of Rick and Michonne especially, Maggie has Gregory hanged, with the episode ending as Michonne rushes away some curious children, and Daryl cuts down Gregory’s lifeless body. This same public execution of Gregory for a failed assassination attempt on Maggie is taken directly from the Walking Dead comic books, albeit with some minor alterations for TV (Carl was also targeted in the comics, but he’s obviously already dead in the TV canon, plus the assassination method was poisoning in the comics, not stabbing like it is here), and it perhaps has an even greater sense of dread in the TV series, since we know that Lauren Cohan is exiting the show after a few more episodes, and Maggie will thus probably not survive into the back half of this season.

As much as it’s nice to see The Walking Dead embrace more optimism and forward movement under new showrunner, Angela Kang, there’s also enough of a promising threat in the delicate peace that’s now being shared, and subsequently disturbed, by the individual needs of each community. We don’t see Negan at all in this episode, despite several references to him being imprisoned in Alexandria, nor do we see the much-hyped comic book antagonists that have been promised for this season, namely Alpha and the Whisperers, but it’s good that the show isn’t rushing into giving us a new batch of boogeymen as a cheap distraction from real storytelling. The show’s priorities seem to be in the right place for now, highlighting the very relatable drama and character challenges that come with keeping struggling and/or irritable societies happy and well cared for. I’m looking forward to the TV introduction of the Whisperers as much as anyone else, but I’m glad that the show is taking its time with introducing them. For now, I’d be quite happy to go all in on the foreshadowed doom that seems to be on the way for Rick and Maggie alike throughout this season’s front half. Nothing like the horrifying loss of two great leaders to really prime the Whisperers for a truly grand entrance towards the season’s latter half!