After kicking off Series Eleven with a huge bang, Doctor Who kept straight along with an episode that picks up immediately after the events of last week’s season premiere. “The Ghost Monument” put together the remaining pieces of Doctor Who’s revised direction under new showrunner, Chris Chibnall, with Jodie Whittaker’s Thirteenth Doctor continuing to shine, as she and her accidental companions accidentally get zapped over to their first alien planet, just in time for The Doctor’s latest spot of trouble. This is all kicked off by an all-new opening credits sequence for the Thirteenth Doctor’s episodes that calls back to the psychadelic, highly alien-looking credits style of 1960’s Doctor Who in particular, only with a great modern spin that downplays the epic bombast of New Who’s other Doctor intro’s in favour of a more suave and majestic touch. I really like it!

While The Doctor and her companions logically should have died immediately after being stranded in space, they end up being grabbed by two separate ships, each being piloted by a humanoid alien racer that is competing in a massive intergalactic race, with each being the final two contestants. Ryan and Graham end up grabbed by the desperate and determined Angstrom, who is trying to save her family from ethnic cleansing, while The Doctor and Yas end up stuck with Epzo, a self-serving rogue who simply wants to line his own pockets. The separation doesn’t amount to much in the end, since the two groups unite after one lands and the other crashes on the nearby planet, Desolation mere moments later, wherein they learn about the final challenge of the race; To reach the mysterious ‘Ghost Monument’, a mysterious object that continually appears and disappears every few years.

If you’re an observant Doctor Who fan, you may have immediately guessed what exactly this ‘Ghost Monument’ is, and sure enough, the race organizer, Ilin quickly confirms that it is indeed the TARDIS, stuck in an uncontrollable loop of phasing in and out of solid space and time. This gives all of the characters a common cause, and a particularly hazardous planet to try and realize it on. It’s a great setup for a classic-styled otherworldly Doctor Who mystery, offering a superb mix of atmosphere, excitement and a whole lot of big questions. It quickly becomes apparent that Desolation used to be a very highly populated world with a very advanced civilization, but despite that, no signs of life are anywhere, and everything from the water to the gases in the atmosphere to the night itself is trying to kill anyone on the surface at all times.

What was extra surprising about the events of the episode is that they also happened to tie back in to the season premiere in an unexpected way. It turns out that the planet was ruined by the Stenza, the race of Tzim-Sha, the alien threat from last week. It seems at this point like Chibnall may be grooming the Stenza as a major new iconic set of recurring villains for The Doctor, on par with the likes of the Daleks and the Cybermen. It’s certainly one very bold way to try and make your mark on the show, beyond being the first showrunner to introduce a female incarnation of The Doctor! Clearly, the Stenza mystery is going to keep being trickled out for the remainder of the season, and that’s pretty exciting, considering that they’re clearly capable of doing quite a lot of damage, as evidenced most of all on this planet! 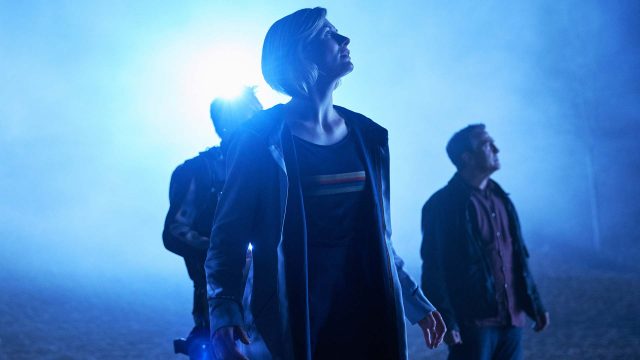 In the meantime, we also got another great opportunity to further develop the show’s new companions, who all have different reactions to their first alien planet. This provided an even bigger showcase of what the three-companion approach can add to the show, creating a greater sense of teamwork not just with the local inhabitants, but with The Doctor manning a sort of ‘squad’ of thinking minds, rather than just one steadfast ally. This also played well with the two highly disparate alien racers that The Doctor and her crew are stuck traveling with in this episode, who both have conflicting philosophies about partnership, family and personal gain. It’s a little basic and old-school in terms of character commentary, but it works, and it helps to further develop a potent sense of heart for this new run of Doctor Who, which certainly hasn’t been lost with Whittaker’s more upbeat, optimistic Doctor portrayal.

That said though, the show does sometimes fall into that stubborn trap of providing a big, sprawling mystery and conflict that ultimately ends up having a disappointingly easy solution. The Doctor and co. eventually end up cornered both by attack robots and scarf-like artificial life-forms called ‘Remnants’, which prepare to choke the life out of them, but Epzo just happens to have a very rare cigar that just happens to be useful for lighting up a convenient field of acetylene gas that everyone is standing in at the time, conveniently incinerating all of the Remnants at once. Because Doctor Who. Angstrom and Ezpo then just approach Ilin’s goal tent at the same time and declare a joint win, which Ilin initially rejects, until Epzo threatens to hunt him down. Okay, two things; First, why couldn’t Ilin just declare Angstrom the winner and leave Epzo stranded then? It’s not like Epzo would have a way of getting off the planet that Ilin knows of. Second, if it was as easy as threatening Ilin into accepting a joint win, then why didn’t Angstrom and Epzo just do that to begin with? Why even bother pitting them at odds? Things don’t totally add up in the end, but I suppose that may be intentional to some extent. I’ll also give the show the benefit of the doubt by accepting that those laughably fake-looking scarf monsters are probably an intentional throwback to Classic Who, which was full of ridiculously obvious, cheap-looking prop monsters like that.

Even if not everything ends up tied together in a wholly efficient or clever manner however, The Doctor does manage to get the TARDIS back in the end, which has once again redecorated with a new crystalline appearance for its newest Doctor incarnation, along with some new, more toy-like consoles. It’s a good look, and its more distinct aquamarine colouring and black police box signage complements Whittaker’s Thirteenth Doctor very nicely! That’s really what, “The Ghost Monument” is all about; Placing the rest of the building blocks for what to expect with the adventures of the Thirteenth Doctor and her companion trio. To that end, the show did a pretty great job of honouring the past while looking to the future in this episode, particularly as it continues to do a pretty solid job of setting up more of a large-scale threat with the Stenza. Doctor Who continues to function very well under Chris Chibnall’s new leadership at this point, representing what is often the show at its most inspired; Simultaneously feeling both classic and modern, and in that sense, becoming just as timeless as The Doctor themselves.

Doctor Who 11.2: "The Ghost Monument" Review
Doctor Who brings its new Thirteenth Doctor and companion trio to deep space for the first time this week, continuing to represent a very strong union between classic and new elements.
THE GOOD STUFF
THE NOT-SO-GOOD STUFF
2018-10-15
90%Overall Score
Reader Rating: (0 Votes)
0%