By the end of its third season, Supergirl had once again squandered its initially interesting antagonist on a disappointingly weak conclusion to the season’s overall villain arc. Despite the change in showrunners with Season Three,  the series still seemed to be stuck in the same old habits, and that didn’t seem to present a lot of initial promise for the all-new fourth season, despite a fairly interesting cliffhanger conclusion to the season that preceded it. To my great surprise however, Supergirl has undergone quite a turnaround in quality with the start of its fourth season, presenting a very strong and inspired season premiere that actually manages to do more with its political subtext than just heap on more increasingly aggravating and naive liberal idealism.

One of the main reasons why Supergirl is often the most contentious and divisive among The CW’s five current DC dramas is because of this insultingly obvious hard-left political bias that constantly has it grandstanding and virtue signaling, while clearly taking sides in what are supposed to be interpretive themes and debates, and, at worst, failing to understand the actual weight behind the issues it brings up, to the point of seeming like it’s just not in touch with reality, even by the standards of a DC show. We’ll have to see if Season Four ends up avoiding this show’s frequent problem of diminishing returns in its season arcs, and especially its villain arcs, but I will say that so far, it seems like Supergirl is at least trying to get smarter, and at least trying to present a less biased, more introspective take on the issue it wants to address, rather than just preaching on an adolescent soapbox. 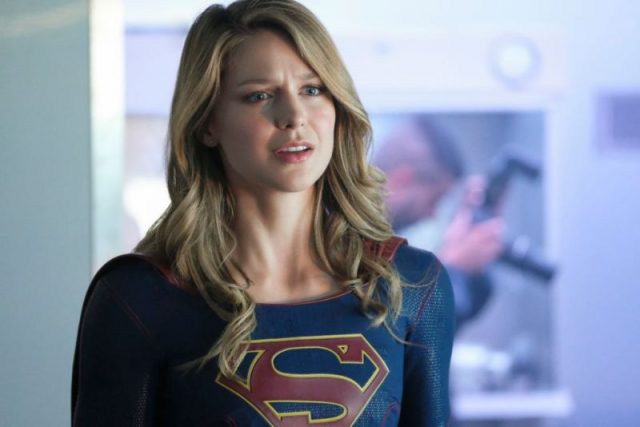 One thing that’s immediately promising and distinct about Supergirl’s fourth season is that its main antagonists are actually humans, not aliens, or at least that’s the case for now. The new threat comes in the form of Mercy and Otis Graves, played by Rhona Mitra and Robert Baker, respectively, who should be recognizable to Superman franchise fans, since Mercy in particular often serves as Lex Luthor’s chief of security in the DC Universe (Otis, meanwhile, is a nod to Lex Luthor’s henchman from the Christopher Reeve-era Superman movies). That same affiliation with the incarcerated Lex Luthor is touched upon during a meeting between Lena and Lillian Luthor, but for the most part, Mercy is functioning as a fully independent baddie, with her and her brother breaking into a lab using an alien’s severed tusks to some unknown end, and even wielding technology that disables Supergirl very easily!

As exciting as it is to see Supergirl actually believably struggling against human villains for the first time in a little while, some of the best scenes in this season premiere were actually shared between Lena and Lillian. The two playing chess continues to be an obvious foreshadowing of the clandestine Checkmate organization from DC Comics lore (it seems increasingly likely that Checkmate will be Lena’s brain-child in this universe), but even better is Lena having to stare down her demons after so freshly suffering a fractured relationship with Supergirl in the wake of Reign’s defeat last season. Lena wants to be a good person, and she wants to break away from her family legacy, but she’s being pushed to a point where she needs to consider the practicality of being a Luthor. 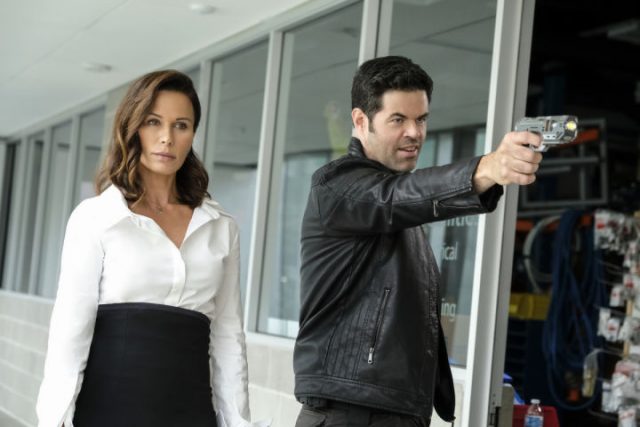 This is especially crucial in trading evidence on her mother to the D.A. in order to get the charges dropped against James for his vigilante work as Guardian, something that she successfully does, while also pointing National City’s legal system towards one Bruno Mannheim in the process. This is actually very cool, since Mannheim is the leader of Intergang in the DC Comics Universe, and he was even teased to exist in the main ‘Arrowverse’ on Earth-1, wherein the attorney prosecuting Oliver on Arrow was revealed to have taken down Intergang and Mannheim on that Earth. Considering that Mercy and Otis are clearly using the alien-busting technology that Intergang is often known for in other DC media, it’s pretty clear that Intergang is probably about to make a big splash on Earth-38, likely as an initial foe to Lena before they become an issue for Supergirl. It will also thankfully make up for the ‘fake’ Intergang that Supergirl tried to pull a couple of seasons back, simply giving alien weapons to random jokers on the street. I’m glad to see that the show seems just as eager to forget about that stunt as I am.

Beyond all of the Luthor talk, the bulk of the season premiere was taken up by J’onn trying to warn Kara that the tusk removal on the alien scientist was actually a hate crime, something that Kara dismisses, since it seems evident that Mercy and Otis were simply after some sort of technology from a lab. I still think that the show has taken too hard a left turn with J’onn’s character, since he’s suddenly a total pacifist that is completely refusing to fight, even when he’s blatantly leaving people unprotected, and that just doesn’t seem to fit with J’onn’s established personality. I think it’s all but guaranteed that J’onn will eventually return to his Martian Manhunter identity, so pretending otherwise is completely pointless, especially to avid DC fans who have seen this story arc with various DC heroes too many times already. Still, it was actually a bit clever to have J’onn be right, even when Kara appeared to be the more level-headed one in the argument, when Supergirl traces the technology to an abandoned warehouse that’s being used as a server farm for an anti-alien hate group, which Mercy and Otis happen to be lieutenants for.

This hateful sentiment that J’onn is warning Kara about just so happens to be timed with President Marsdin celebrating the two-year anniversary of the Alien Amnesty Act, which allows aliens to enjoy the same civil rights as humans, complete with being able to work human jobs and make a standard human living. More pro-human activists have since become outraged at what they believe is an invasion of their country and their own rights, and two years is enough time to believably build up a radicalized group of hatemongers, who aren’t dangerous criminals but are often just everyday people for the most part. Kara even directly mentions that she knows how to stop a villain, but doesn’t know where to begin fighting a negative ideal, and that’s actually a very clever idea for a persistent, season-long threat. Kara’s knocked around enough of the same world-conquering aliens. It’s about time that she faced an actual, credible threat from within humanity itself, one that she can’t just punch away!

Among the busy developments within this season premiere as well were some shifts in the characters’ status quo, namely with the introduction of television’s first-ever transgender superhero, albeit without the superhero part for now. While not transgender in DC Comics lore, Dream Girl, whom this new character, Nia is apparently an ancestor of, is another member of the 31st Century Legion of Super-Heroes that Supergirl hasn’t portrayed at this point, likely providing a convenient link for Brainy to have some sort of contact with the future life he’s seemingly abandoned. On that note, Alex and Brainy trying to learn to work together is a fair enough story arc that mostly hits the right notes, and is sure to keep being an enjoyable source of friction as events continue at the DEO this season. More interesting though is our first look at Nia, the ancestor of future Dream Girl, Nura Nal, who is played by transgender activist, Nicole Maines. Supergirl doesn’t draw attention to Nia being portrayed by a trans woman at this point, and that’s probably a good idea, since this avoids turning the history-making inclusion of a transgender superhero on a television show into a mere gimmick or tokenism. Instead, Nia becomes the subject of a fairly standard workplace dispute at CatCo, which humourously ends with Kara starting to show shades of turning into Cat. It’s both funny and uplifting, and makes Nia feel like just another lovable person at this point, even though I can’t really see Kara going full-on Cat even in the future, since she’s just not snotty enough to really make that work. 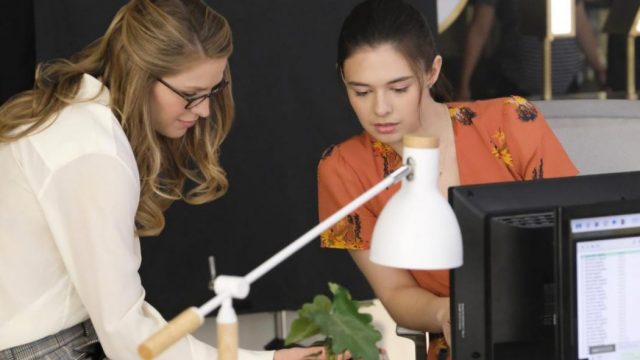 “American Alien” is definitely one of Supergirl’s busiest season premieres to date, in a great way, and it certainly ended with a very promising new direction for Season Four. The new human villains seem to be working very well so far, and the threat being rooted around a toxic ideal, rather than just another alien conquerer, is something that is definitely overdue as a refreshing creative direction for the show. The teases for Checkmate and Intergang also present quite a lot of promise on the Luthor end, especially for avid DC fans, and should keep paying dividends later, now that the work of Mercy and Otis has exposed President Marsdin as an undercover alien by the end of the episode. As Kara points out, the world really seems like it’s getting better, but that also merely seems to motivate its dissenters to double down on their own ideas for the future. I really hope that the show doesn’t waste all of this promising political intrigue by just making that Kara clone become the ultimate threat this season, since we do see her falling in with Kasnian nationals in this episode’s final seconds, but hopefully that’s not all we get for the season’s conclusion. For the first time in a fair while, I’m cautiously optimistic about a new Supergirl season. I just hope that the show stays on this smarter path, and doesn’t ultimately fall back into old habits yet again.