Arrow struggled just as much as The Flash and Supergirl with the apparent ‘Arrowverse Slump’ that seemed to be plaguing The CW last season, an issue that was seemingly only dodged by the still-great Legends of Tomorrow during its previous third season. Fortunately, after Supergirl rebounded pretty effectively with a strong season premiere during the previous night (The Flash isn’t quite there yet), Arrow also seems to have found some renewed footing in its own season premiere, “Inmate 4587”, despite Oliver being incarcerated, and no vigilantes having been active in Star City since Oliver’s imprisonment.

It wouldn’t be much of a show if Star City’s vigilante issue quite cleanly evaporated with Oliver’s arrest however, so with the start of Season Seven comes another who appears to have taken up the hood, with a mysterious third party now serving as something of a copycat under Oliver’s former superhero identity. This has Star City’s officials up in arms, including Laurel, who is declaring to the public that the fake Green Arrow is going to be apprehended with due haste, a task that Dinah wishes to carry out as soon as possible. It’s interesting to see Dinah in this position too, since, during her tenure as Black Canary, you’d think that she would be the first to defend the new Green Arrow’s actions. Maybe Dinah is just trying to look out for her squad as the SCPD’s new captain, but to see her hang up her vigilante hat so firmly is something that I’m interested to see further explored throughout the season, as it’s a big character shift, but one that does kind of make sense after her new promotion. 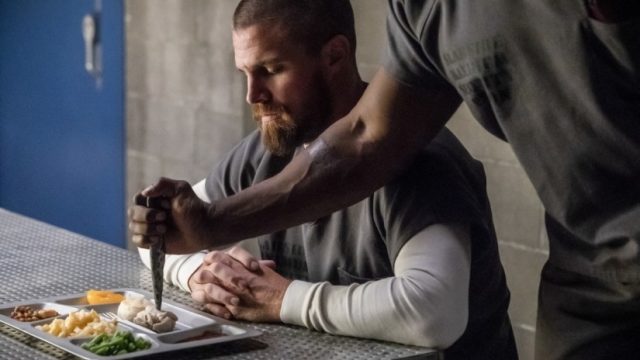 Perhaps less surprisingly, Rene is all in favour of the new Green Arrow’s appearance, particularly when he gets bailed out of a jam after trying to follow a troubled student at his new training gym. Rene thinks that Dinah should allow the new Green Arrow to operate unchecked, but Dinah is against this, particularly when an otherwise airtight SCPD operation is foiled by Rene, who dons his Wild Dog outfit to help the Green Arrow impostor escape when they get cornered. Dinah threatens to arrest Rene if he pulls that stunt again, but Rene doesn’t seem too keen on abandoning his Wild Dog identity anymore. Rene and Dinah representing the two dueling perspectives on renewed vigilanteism in Star City is a good new direction for these characters in my opinion, even if I feel like it’s also true that Dinah’s no doubt fighting a losing battle, since she’s bound to suit back up as Black Canary at some point in the future.

Naturally, this season premiere also focused heavily on Oliver languishing in prison, and apparently a different prison than Iron Heights at that. This prison shift is at least a small remedy to the fact that The CW already did this storyline on The Flash, after Barry went to prison due to The Thinker framing him for murder just last season. Fortunately, Arrow seems to be going in a bit of a different direction with this idea, namely since Oliver’s vigilante operation has effectively stopped, with someone else taking up his mantle against his will. It also helps that putting Oliver in a new prison also means that he gets to be paired with several of his former foes that clearly didn’t get sent to Iron Heights (thus somewhat explaining why these villains weren’t seen during Barry’s extended incarceration on The Flash), namely Bronze Tiger, Brick and Derek Sampson, who quickly proceed to make his life very difficult in prison. It’s almost enough to remind you of the potential of that aborted super-villain prison movie starring Green Arrow that Warner Bros. almost made. That’s a shame. 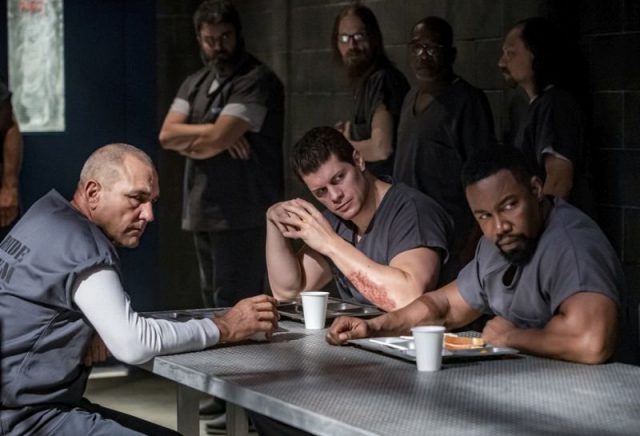 Felicity and William, meanwhile, have been placed into Witness Protection by Diggle and A.R.G.U.S., with Felicity assuming life as a barista, while William resumes his schoolwork. The two are obviously far removed from Star City at the time as well, which presents a more personal look at how Oliver’s imprisonment is affecting those close to him, divorcing these feelings from Oliver no longer running a Star City-wide operation as the Green Arrow, and what that means from a political standpoint. Even then though, it’s not long before trouble finds them, with Diaz tracking down Felicity and nearly killing her, before she ends up visiting Oliver in prison. Yeah, if that sounded abrupt, it’s because it is. This was the one weird spot in an otherwise very strong season premiere. It honestly felt like there was a scene missing, since Felicity was knocked to the ground, had a gun held to her face by Diaz, and then somehow magically warps over to Star City to tell Oliver that she’s tired of hiding barely a couple of scenes later. Sure, she mentions that A.R.G.U.S. apparently bailed her out (luckily, Diggle had stepped up surveillance to twenty-four hours just beforehand), but that seems like a hand-wave explanation for how the episode’s storyline had to get itself out of a corner. It honestly seemed like a cheap excuse to get a rise out of the audience, since Oliver is told by one of the inmates in Diaz’s pocket that Felicity is dead shortly beforehand, but obviously she isn’t, because there’s no way in hell that the show would kill her off-screen, or more than likely at all.

Beyond that however, it seems like Arrow’s new showrunners may also be bringing a new story hook to the series, namely with flash-forwards. The episode is occasionally intercut by scenes of a mysterious man sailing to Lian Yu in the near future, appearing to look for something related to Oliver’s legacy on the island. After finally discovering the grave of Robert Queen, the mystery man is captured by a mysterious hooded island dweller, who is soon after revealed to be Roy Harper! Why Roy Harper is on Lian Yu almost two decades into the future is currently unclear, but as you can probably put together from there, the mystery man is an adult William, with Oliver’s son seemingly beginning his journey to becoming the Arrowverse’s take on Connor Hawke, outside of the literal Connor Hawke of the Arrowverse that is apparently John Diggle Jr., according to Legends of Tomorrow. Does this mean that Arrow is approaching something of a final stretch before the show concludes? It’s possible, since seven seasons is a long time for a show to be on the air, but The CW still claims that there are no concrete plans to end Arrow, or any of their other current DC dramas, at least for now. Besides, why bother hiring new showrunners for a series that the network would definitely be scrapping soon afterward? 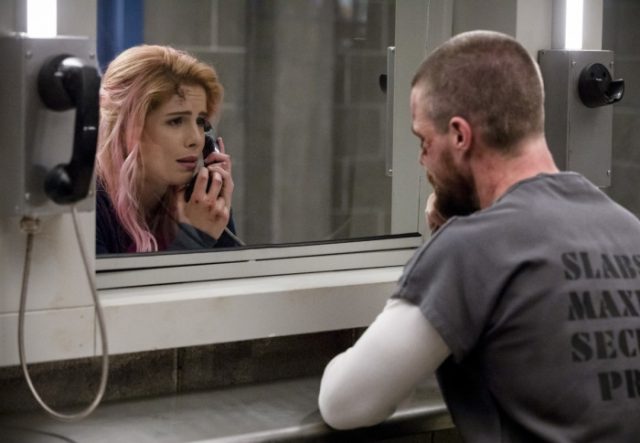 Arrow’s more intense, unpredictable new direction seems to have given the show a new lease on life, for now. As with the similarly-revitalized Supergirl, the real test is whether it can carry that positive momentum through a whole season, not just the season premiere. Arrow has certainly bounced back before, since it seemed to be permanently stuck in mediocrity during its third and fourth seasons, only to then rebound with an excellent fifth season, before sinking right back into an uneven and frustrating sixth season. So far, Season Seven at least seems to be starting off on the right foot, especially when it’s been saddled with a story arc for its lead hero that was already done on The Flash just last season, yet its own take on the hero-in-prison plot appears to be superior, and is doing a better job of keeping the audience on their toes. Arrow’s disappointing third season also had a pretty great start though, so I’ll be paying attention to see where Arrow goes from here. As long as its new mysteries achieve some unexpected, satisfying results during this season though, I think the new leadership will be leaving Arrow in good hands for its later years.