Arrow managed to start off its re-tooled seventh season on a very strong note last week, presenting what will hopefully mark a revitalized new era for this sometimes-uneven show. Fortunately, that positive momentum seems to be continuing in Season Seven’s sophomore episode, “The Longbow Hunters”, which introduces our big new villains for the season, who are loosely adapted from some more recent foes of the Green Arrow in DC Comics lore. Rounding this off is another inspired prison challenge for Oliver, and a surprisingly strong subplot being shared between Dinah and Laurel, who run afoul of the bad guys in their own way.

Oliver and Felicity are both desperate to get information on Diaz, with Oliver deciding to enlist the aid of Brick behind bars, while Felicity tries to take up work at A.R.G.U.S. It’s a fair enough idea on both counts, especially when Brick naturally asks a pretty daunting favour of Oliver, namely to take out the guard that’s been giving him so much trouble. Oliver has since buddied up to his new prison friend, Stanley as well, who is predictably eager to be the former Green Arrow’s only ally in prison, but Oliver makes sure that the two don’t get into trouble. Seeing Oliver and Stanley work together to neutralize the guard without killing him is pretty cool too, proving that Oliver can still be a badass, even when he’s completely separated from his hood. The only slightly unbelievable element to this storyline is that Brick somehow has a massively high tolerance for Oliver playing games and dragging out the effort to just get rid of the guard. Granted, the payoff of Oliver faking being stabbed to get the guard taken away is pretty good, but would Brick seriously stand for Oliver dicking him around to that degree?

The Felicity story arc also had some mostly good ideas that did occasionally rely on a few story contrivances. After hacking into Interpol using A.R.G.U.S. tech, and somehow not being detected immediately (I guess it’s those Overwatch skills?), Felicity brings Curtis and Rene to the apparent base of the Longbow Hunters, Diaz’s new enforcers, only to end up compromising an active operation that Diggle is carrying out. Felicity gets off with a surprising slap on the wrist though, even when she later nearly gets Diggle killed during a proper fight with Diaz, only to have Curtis detach the train car that Diaz is on, when Felicity refuses to allow Diaz to get away. The entire train sequence was fantastic, and Diggle’s tense fight with Diaz was also pretty awesome, but Felicity was way too dominated by her emotions here. Again, the payoff is good, with Felicity deciding to form an uneasy alliance with Watson in the final seconds of the episode, but would Felicity seriously endanger Diggle’s life just because she didn’t want to let Diaz go? She’s supposed to be a lot smarter than that! It’s also quite rich to have Felicity get in Diggle’s face about seemingly not caring about his history with Team Arrow, when Felicity herself seemed all too happy to put Diggle, one of her oldest Team Arrow allies, in harm’s way, simply because she didn’t want to take the loss!

If there was one major strength to this episode though, it really was our new villains, who are off to a very promising start so far! The macguffin of the episode was some sort of super-weapon-powering battery adapter that the Longbow Hunters went after, and this allowed a heist-style introduction to the Arrowverse’s incarnation of the villainous crew, which are a bit different from their DC Comics counterparts. The Longbow Hunters of Arrow still consist of recognizable modern DC Comics personalities, but the roster is altered from the printed panels, even if Diaz is still their leader in both mediums. In the case of Arrow, the Longbow Hunters include Kodiak, a member of the Outsiders in DC Comics lore, who fights with a bladed shield and appears to have super-strength, Silencer, a vicious assassin who carries a device that can dampen all sound waves in the surrounding area, and the one member aside from Diaz that is consistent with the Longbow Hunters’ DC Comics roster, Red Dart, an espionage expert who dislikes fighting, and prefers to fire trick darts that can do things like knock out her targets and disable nearby electronics. Interestingly, both Brick and Bronze Tiger are also affiliated with the Longbow Hunters in DC Comics lore (as is Count Vertigo, another frequent Green Arrow nemesis that has appeared in more than one form on Arrow), so it’s entirely possible that they may join up with Diaz themselves once they get out of prison, assuming that happens during this season. Either way, it’s a great villain idea, and an ensemble of villains do represent a good change of pace for the series, especially when last season tried to introduce a similar idea under Cayden James, and ended up botching it pretty badly.

Between the heist and that superb climactic train battle, we have plenty of reasons to enjoy the presence of the Longbow Hunters already. They’re badass, they’re charismatic, they’re memorable, and they’re everything that Cayden James and Helix absolutely failed to be last season! The Longbow Hunters even managed to make themselves known through a highlight subplot with Dinah and Laurel, like I said, who encounter Silencer while Dinah tracks Laurel to a private attempt to off Diaz herself. The dampened fight between Laurel and Silencer that results is another standout action scene for the episode, and also provides a great example of another reason why Silencer would be especially dangerous to Team Arrow; She’s immune to the Canary Cry! Granted, Dinah and Laurel do manage to overload her device and force her to flee when they combine their cries, but it shows that Silencer is good for a lot more than stealth and cheap tricks! We even get one of the best scenes of the episode soon after this as well, wherein Laurel makes an honest effort to announce to Dinah that she was hurt deeply by Quentin’s death, and is truly sorry for her murder of Vince. As much as it’s entertaining to see Black Canary and Black Siren as enemies, the idea of them being allies that can team up and fight together in the future somewhat carries even more promise. Maybe they’ll always be frenemies to an extent, but it was cool to see Laurel take one of her biggest steps yet when it comes to trying to be a better person, even if she practically is just serving as a loose retcon of Earth-1 Laurel’s death in Season Four at this point.

As for the flash-forwards, they were pretty decent, even if they went to a lot of the places that you would expect them to. Roy is predictably skittish and dismissive about indulging William’s quest to look for answers on his mysterious journey to Lian Yu, even when he sees that Felicity has led William there using a tracking device built into the connection totem she gave him. Roy hints that some sort of falling out or tragedy was had with Thea off-screen (presumably because Willa Holland left the show and we need an excuse to keep Thea out of the story), and hints that he came to Lian Yu to get away from those he loves. This does put a damper on the vaguely optimistic exit that Thea and Roy shared last season, but whatever. The bottom line is that William and Roy dig up Oliver’s original bow and hood from his first year on Lian Yu, and discover a mysterious note inside that Roy quickly burns, before declaring that William needs to go back to Star City, and Roy is making sure that he does. Roy is clearly hiding something, but is it because he wants to keep William away from the Green Arrow identity? William admits that he can’t even use a bow, after all, so it might be even more interesting to have Roy perpetrate some sort of dark act, and William be the only means of making him face it. I doubt the show would have Roy end up being responsible for Thea’s murder or something, but I suppose the flash-forwards are intriguing enough to avoid feeling like a nuisance, at least for now. 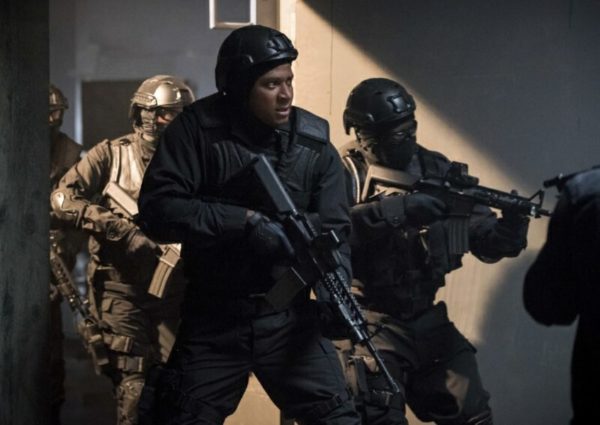 “The Longbow Hunters” certainly doesn’t waste the introduction of its eponymous villains, who manage to both make Ricardo Diaz into a freshly dangerous and exciting villain for the season again (and finally give him the season-long agenda that he deserved last season), while also serving as worthy and compelling antagonists in their own right. I imagine that the continued operations of the Longbow Hunters will probably result in the gradual re-forming of Star City’s vigilante defenders, even if Oliver won’t be able to join them for the foreseeable future, but Watson will surely still be an obstacle there, even with Felicity pushing her to go even harder after Diaz. It will probably lead to the same realization that Star City thrives when vigilantes like Team Arrow protect it, likely exonerating Oliver from his prison sentence, but as long as we get more exciting and satisfying Arrow episodes like this, I’ll be quite happy. Giving Diaz a proper season-long villain arc was already one of the better ideas that Season Seven was bringing to the table. The fact that he’s flanked by a whole ensemble of awesome villains only makes the rest of Arrow’s seventh season that much easier to look forward to!

Arrow 7.2: "The Longbow Hunters" Review
Arrow delivers a very exciting introduction to its new villains this week, as Oliver must try to stick to his principles to get valuable intel, while Felicity tries to align her interests with A.R.G.U.S.
THE GOOD STUFF
THE NOT-SO-GOOD STUFF
2018-10-24
82%Overall Score
Reader Rating: (0 Votes)
0%