The Flash decided to break away from its expected villain-of-the-week story template this week, which usually dominates most of the early episodes on any given season. “The Death of Vibe” instead revolved around better establishing Season Five’s new big bad, Cicada, further exploring his motivations, and just how dangerous he truly is in the grand scheme of The Flash’s career. This was also rounded off with a subplot shared between Ralph and Caitlin, who begin to poke into the fate of Caitlin’s allegedly deceased father, Thomas, who likely isn’t as dead as he would appear.

This sounds like a good chunk of exciting developments to carry our latest episode of The Flash, though disappointingly, everything that didn’t involve Cicada felt like it fell rather flat in the end. This unfortunately includes the introduction to this season’s new Wells incarnation, a pompous French Sherlock Holmes-esque detective whom Team Flash hires to try and help them identify Cicada. Tom Cavanagh is still a ton of fun, and is definitely relishing his latest eccentric turn as the most recent offbeat Wells incarnation that The CW’s DC Multiverse has just spat out, but some of the jokes around this new Wells don’t really land, especially when he somehow charges an exorbitant fee, then tries to escape when he mis-identifies Cicada at first. This not only begs the question of why Cisco just has Multiverse-hopping devices lying around S.T.A.R. Labs when he obviously shouldn’t need them, but also makes one wonder what exactly made Herr Wells, the first candidate, so busy that he couldn’t offer his expertise with a metahuman serial killer! I suppose Sherloque Wells, as he’s known, may eventually grow on me, but for now, he’s kind of annoying in high doses (even if this is probably intentional), and his reason for being conscripted into Team Flash, namely having to pay back Barry’s crew after he spends their misplaced detective fee on alimony to his seven ex-wives, feels a little too forced. 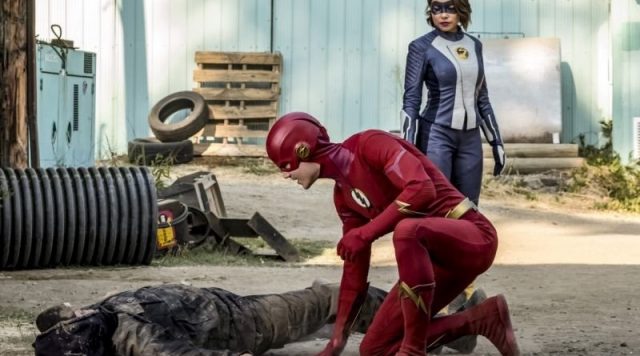 On the bright side however, Sherloque Wells does tie into a pretty great curveball with Cicada. You see, in DC Comics lore, Cicada is a 19th Century cult leader named David Hersch, who can steal the life force of other people, and essentially make himself immortal. This means that when Sherloque confidently declares that David Hersch is Cicada on thirty-seven different Earth’s, and was likely the original Cicada of Nora’s timeline on Earth-1, it’s easy to believe him. Nora’s intervention has changed events however, so not only is Cicada showing up early, but now he’s also an entirely different man! The buildup behind Cicada was pretty great already, namely when Nora reveals that Cicada is the villain that Barry never catches before he disappears in her timeline, and that not even Supergirl, Green Arrow, the Legends or, “The League” (our latest hint that the Justice League does eventually come to exist in the Arrowverse’s future!), were capable of defeating him in battle! This arrogance with Hersch’s identity almost has deadly consequences to boot, when Hersch, now re-envisioned in the Arrowverse as a wannabe terrorist, is apprehended by Barry and Nora, leaving the new Cicada to nearly kill Joe in his house!

The idea of playing with DC fans’ expectations regarding the identity of Cicada is clever and unexpected, even if this seems to be another instance of The CW’s Arrowverse shows lending story ideas out to one another. Arrow already tried something similar with Vigilante in its fifth season, setting up Vigilante’s DC Comics alter-ego, Adrian Chase around the same time that Vigilante becomes active in Star City, only to pull the rug out from under DC fans by re-imagining the man who was actually Vigilante and Chase as completely separate characters from their comic book counterparts. Still, the motivations of Cicada, who seemingly wants to exterminate all of the metahumans in Central City, prove to be surprising to say the least. It turns out that Cicada is actually a grieving father whose daughter is comatose and dying, which is revealed towards the end of the episode. The obvious question now is whether Cicada is actually targeting metahumans and stealing their abilities as a means of trying to heal his sick daughter. It creates a deeper villain than you may expect, and that’s good news, since Cicada is supposed to be our main antagonist throughout this season.

Like I said however, all of the story elements outside of Cicada’s development felt like they fell flat throughout much of this episode, and that was frustrating. Both Ralph and Caitlin try to headline some interesting subplots, but Ralph’s storyline, which sees his Elongated Man persona become a humourous internet meme after he tries to save a market that’s being robbed, feels so forced and ridiculous that even the show quickly gives up on it, not addressing it at all after it’s initially brought up. Does Ralph suddenly not have control of his powers? When did that happen? At least Caitlin’s subplot has a bit more promise, with Ralph tagging along to visit her mother, who obviously denies that Caitlin’s father is still alive. We know that this is a lie however, and when Caitlin breaks into Tannhauser Industries to try and find more information on her father, she finds a suicide note, which originally leads to an emotional moment with Ralph. The problem is, viewers will immediately deduce that the note is fake, so this otherwise good scene with Ralph is completely worthless. Sure enough, the episode’s final moments then end with Caitlin finding a secret message from her father, telling her to come find him. It’s all too predictable and uninteresting, and presents a very unwelcome speed bump for the mystery of Thomas Snow’s disappearance.

As if you couldn’t guess, the sensationalized title of the episode is also an entirely too obvious fake-out. This is a storyline that does involve Cicada though, after he goes to Joe to initially try to get him to give up Vibe’s location. When Joe refuses however, Cecile calls for help after she’s spotted, just before Cicada stabs Joe to death, leading to Vibe appearing at the West house, and tumbling into a breach with Cicada. After having to flee for his life in a forest, Sherloque must quickly identify where Cisco is, and Barry has to get there before Cisco is killed. This leads to another unreasonably quick deduction to speed things along, another quick scrap with Cicada that Barry will obviously lose, and Nora trying a plan that appears to kill Cisco when it backfires! Except, it obviously didn’t backfire, and Cisco somehow incomprehensibly conspires with Nora to fake his death, so Cicada will stop hunting him. This does create the promise of Team Flash not being able to openly rely on Vibe for the foreseeable future, as Cisco must go into hiding within S.T.A.R. Labs, but the convoluted and ludicrous way that Cisco and Nora tricked Cicada into thinking that he’d successfully killed Vibe felt entirely too contrived and absurd.

At least Cicada himself is still standing tall as an impressive villain at this point, and at least The Flash took a welcome break from more disposable metahuman stooges this week, but, “The Death of Vibe” was nonetheless a frustrating episode. The show just had to strain too much to get Cisco off of Cicada’s radar, and who knows how long Vibe being inactive will even stick for. The new Wells incarnation is also not making the best impression so far, being an awkward combination of stereotypes and annoyances that just don’t yet feel like they’re effectively coming together. Even the hunt for Thomas Snow became disappointingly dull this week, as Caitlin’s reunion with her mother goes nowhere, and her subsequent discoveries with Ralph present absolutely no surprises whatsoever. It felt like none of the show’s leads had anything interesting to do this week, with our new main villain completely stealing the show in the end. I’m at least glad that Barry has a worthy threat to succeed The Thinker this season, but can’t the good guys find something more believable and worthwhile to do while they’re struggling against him?

The Flash 5.3: "The Death of Vibe" Review
The Flash considerably stumbles with a frustrating episode this week, as all of the heroes get saddled with disappointing storylines.
THE GOOD STUFF
THE NOT-SO-GOOD STUFF
2018-10-24
65%Overall Score
Reader Rating: (0 Votes)
0%