Black Lightning finally appears to be addressing the problem of too little of its title hero this week, presenting an episode that actually made an effort to try and shift focus away from the Pierce family’s struggles, in favour of better exploring new threats to Freeland. “The Book of Consequences: Chapter Three: Master Lowry” still doesn’t strike a perfect balance between the show’s social commentary and comic book inspiration, especially when its title ends up highlighting a very inconsequential part of the episode, but at least we’re finally seeing the villains properly stir the attention of the heroes again in this week’s offering.

The title of the episode refers to the white principal that is now taking over Jefferson’s old position at Garfield High. Jefferson meets the principal, and of course, they get off on the wrong foot. Worse still is that Principal Lowry has started to install metal detectors at the entrance to the school, as a way of appeasing the board in the effort to tighten security after the Painkiller attack last season. Jefferson is staunchly against this idea, but that’s the last we hear about it for the entire episode. There was a lot going on this week, granted, but it appears that Black Lightning’s second season trying to cover so much ground with its drama is still resulting in certain subplots not seeing any real resolution. I’m sure that Jefferson’s continued struggles at Garfield High will eventually go somewhere, but for now, they just take up space in an already busy set of plots. 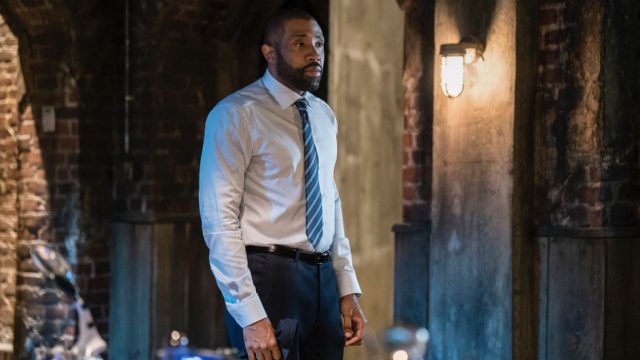 In fact, at worst, this week’s Black Lightning episode felt pretty disjointed, hopping around all over the place without much rhyme or reason. There are individual bits of inspired storytelling, but the messy way that the show tries to bring them together often results in an episode without a clear sense of focus. This is most often seen in the other little story ideas beyond Garfield High that are brought up in passing and then quickly abandoned. We see Anissa patch things up with Grace after Jennifer tells her that her new musician sweetheart is going to eventually dump her, but that just hastily sweeps away this whole apparent strain that the show seemed like it wanted to build between Anissa and Grace early in the season. Henderson also pays a visit to Jefferson to try and enlist Black Lightning’s aid in interrogating a perp, but he then refuses to address his feelings on Jefferson’s revelation about his superhero identity before just leaving. Couldn’t he just text Jefferson if he didn’t truly want to talk to him? They are (or at least were) friends outside of their work after all!

On the plus side however, Tobias Whale and Painkiller were finally given something better to do this week, especially since they’ve finally gotten the attention of the Freeland P.D. again. Henderson discovers the disposed remains of Tobias’ crooked detective contact, and this leads to him having to put aside his feelings on Black Lightning after he encounters red tape in the system. This is a potentially interesting idea, but it’s one that this episode doesn’t really explore that much either, like I said. Fortunately, we do at least get interesting new developments with the show’s main antagonists here, as Tobias is arrested on a mysterious tip while mourning Syonide, and Painkiller is left to be turned loose, striking fear into Freeland’s criminal underworld after he accidentally kills one of Tobias’ flaky protection clients. Tying Painkiller’s rise to power with Jennifer freshly forsaking his former identity as Khalil is something that does have some promise, though after Black Lightning tricks Khalil into firing a dart at him so that Gambi can reverse-engineer an antidote to his poison, one also has to wonder if Khalil is going to find himself with significantly less influence soon, now that his main means of attack may soon have an ironclad defense, at least for Black Lightning.

This week’s subplot with Jennifer was one of the better elements of this episode for sure, even if it does initially feel a bit rushed. Apparently, Jefferson and Lynn happen to have a metahuman friend that can create mental projections, and isolate people in mentally confined spaces. After the woman approaches Jennifer in the park, she becomes frightened, and begins to wonder if her parents see her as a monster. This is another idea that is brought up and somewhat hurried through through, even if it does at least go to the interesting place of Jennifer finally having a true means to learn to master her metahuman abilities. It seems like Jennifer may finally find the resolve to adopt her DC Comics identity as Lightning by the end of the season, but I hope that the show doesn’t rush through her refining of her powers either. Jennifer’s abilities are very volatile and dangerous, after all, so her seemingly inevitable journey to becoming Lightning should be a challenging one, but also one that feels rewarding at the end.

As for the other Pierce sister, she’s still leaving her Thunder outfit at home, but has continued to make undercover ‘donations’ to Freeland’s local church organization. Anissa even steps up her efforts after she learns that the city is about to shut down an important clinic for the struggling citizens. This helps to create some more action aside from the couple of competent scraps had by Black Lightning this week, as Anissa masks up to stop an arms deal and run off with their money, even enlisting Gambi to come along for the mission. I really like the potential of Gambi possibly being torn between loyalty to Black Lightning and to Thunder, who are obviously about to find themselves greatly at odds, when Anissa’s ‘secret hobby’ inevitably becomes known to Jefferson. I doubt it will be much longer before Jefferson starts learning what Anissa is doing with her nights alone, given how Anissa is being increasingly less careful about robbing criminals, even doing it in daylight this week! Are Freeland’s heroic father-and-daughter duo still going to be a team by the end of the season?

“The Book of Consequences: Chapter Three: Master Lowry” was a bit of a mess in some respects, but it did have individual pieces of interesting stories amid its busy and disjointed structure that nonetheless made it entertaining enough to get by. The show moving away from one of Season Two’s strongest elements this week, namely the Pierce family drama, is definitely a risky move, but it did allow Black Lightning to finally yield a few more storytelling dividends from its comic book side, something that this season has struggled with fully realizing so far. The arrest of Tobias and the rise of Painkiller as the apparent biggest new threat to Freeland is certainly something to look forward to as well, and it couldn’t have come at a worse time, since Jefferson and Anissa are finding themselves going in two very different directions as Freeland’s resident superheroes. Now that Jennifer has finally begun earnest metahuman training, it’s quite possibly her that will inevitably end up being entrusted to stop Khalil once and for all in the future, which would be a fitting and challenging catalyst to allow Jennifer to fully emerge as Lightning in this universe. This episode may have collapsed under its own weight to a degree, but it still presents enough promise to keep viewers invested in what’s next, especially with Tobias Whale finally off of Freeland’s streets, even if that inevitably won’t last for long.