Arrow’s seventh season seems to be coming together quite well so far, and is already representing a significant improvement over the show’s frequently shaky sixth season in virtually every respect! That positive momentum continued with this week’s episode, “Crossing Lines”, which found plenty of inspired ways to play with the lines between heroes and villains, as well as law enforcement and vigilantes. This led to strong core story arcs for both Oliver and Felicity, who anchored most of this episode, while the Diggle family roped Curtis into a pretty engaging subplot in Zurich as well. There weren’t even any flash-forwards this week, but that’s certainly fine, since this episode is already pretty packed with exciting story developments, so I don’t imagine that there would be any room for them here anyway.

Something that really has Arrow excelling right now, against all odds, is the fact that the characters having to abandon their vigilante identities has really allowed their storytelling and character drama to take center stage in a really amazing way. Oliver being reduced to a prison number has left him with nothing but his fighting skills and wits, cut off from the team and allies that he’s now grown accustomed to relying on. Likewise, Felicity no longer has a seemingly infinite supply of technical resources to rely on, essentially leading to her pushing forward on a sheer desire to get out from the torment of Ricardo Diaz’s influence. It’s a whole new vigilante-free take on Team Arrow, and it’s tightened the storytelling in a way that’s proving to be especially satisfying, easily the most satisfying that Arrow has been since the standout Prometheus conflict from Season Five! 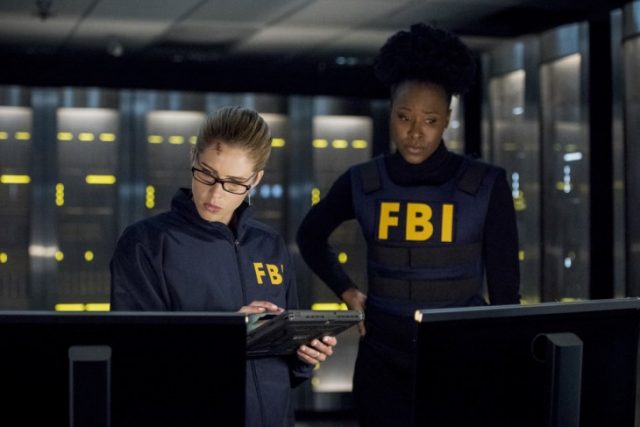 As much as Oliver still played a significant part in the episode this week, Felicity felt like the real star of this episode, as she forms an unlikely alliance with Agent Watson to try and get her to go off-book in a Hail Mary effort to apprehend Diaz and the Longbow Hunters at a CDC facility. Rene and Dinah tag along for the op as well, providing all of the surviving heroic personalities aside from Oliver, Curtis, Lyla and Diggle an opportunity to try and end Star City’s current biggest menace. This led to a lot of neat interplay between Felicity and Watson, who suddenly find themselves with a common goal, despite their polar opposite ideas about when and how the law should be applied to dealing with criminals on the scale of Diaz. It also led to plenty of outstanding action scenes to boot, with the entire CDC sequence being remarkably thrilling to watch! Sure, all of the bad guys apparently get away, with a mysterious strength-enhancing viral compound no less, but it’s nonetheless very cool to see Watson finally portrayed as more than a stubborn girl scout that’s seemingly putting her career ideas ahead of the welfare of Star City.

This is such an interesting and fun team-up in fact that it feels all too briefly over, when Watson takes the fall for going off the books and subsequently letting Diaz and his crew escape, which leads to her getting re-assigned to a desk job in Washington. I don’t think it’s going to shock anyone that the Arrowverse’s FBI is predictably less than helpful in the hunt to capture Diaz and his new cronies, but seeing Felicity and Watson come to something of an understanding regarding each other’s stance was a pretty strong note to send Watson’s character off on. There was one last great surprise here as well, since, despite claiming that the Silencer got away after a scrap with Dinah and Rene in the CDC’s boiler room, it turns out that Felicity and Rene actually secretly captured Silencer off-screen, and are holding her captive! This is an especially shocking turn for Felicity, who is now demonstrating her growing desperation to bring down Diaz on an intense new level. I somewhat expect this out of Rene, but to see Felicity become party to kidnapping and torture is certainly something unheard of for her character, who is normally one of the more humane voices on Team Arrow’s roster! 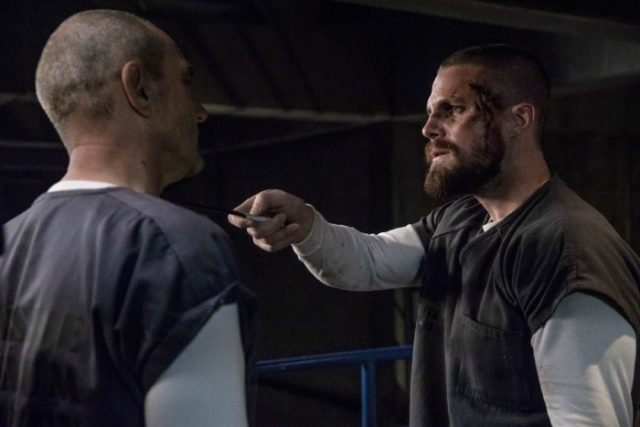 Oliver also had a pretty strong main story arc at Slabside this week, even if most of his storyline was all about simply positioning him to meet his next foe; A mysterious contact of Diaz’s known only as ‘The Demon’, who apparently arranged the failed hit on Oliver in the showers during the events of the season premiere. Oliver is forced to trust Brick to arrange a meet with The Demon, and obviously, Brick is full of it, since he tries to coerce Oliver and Stanley into cornering themselves in a cell, so that Bronze Tiger can take them out! Oliver manages to defeat the prisoners and subdue Bronze Tiger however, resulting in another standout scene of Oliver learning about the line between himself and Bronze Tiger, especially when Bronze Tiger finally reveals that he was the one who saved Lyla’s life during the Suicide Squad mission in Markovia a few seasons back.

There’s definitely more of a history to Bronze Tiger’s character than Arrow has currently explored, even if it seems like it may be put on the back-burner now, since Oliver is now having to get himself transferred to a different level of the prison in order to meet The Demon. This turn involves Oliver discovering Brick’s secret prison fight club (because of course Slabside has a secret prison fight club), beating on Sampson in another standout action scene, and finally injuring several guards after Brick tells him that The Demon is actually on Level Two, the place where the extra bad criminals are kept. Slabside having an entire super-duper prisoner section in what’s already supposed to be an ultra-tough maximum security prison seems a bit far-fetched, but this is the Arrowverse, so whatever. The bigger question is why the guards proudly march Oliver off to Level Two after Brick tells Oliver that he can’t get in, and needs to get in. Sure, Oliver considerably injured a bunch of guards, even if they were corrupt guards that were in on Brick’s secret fighting ring, but those same injured guards are the ones who bring Oliver exactly where he wants to go. They were all there listening to Brick taunt Oliver, and can easily figure out that Oliver staged the attack on them just to get thrown down there. Why are they just immediately giving Oliver what he wants? Arrow couldn’t at least take one more episode to have Oliver figure out a more clever, unpredictable plan to get to The Demon? 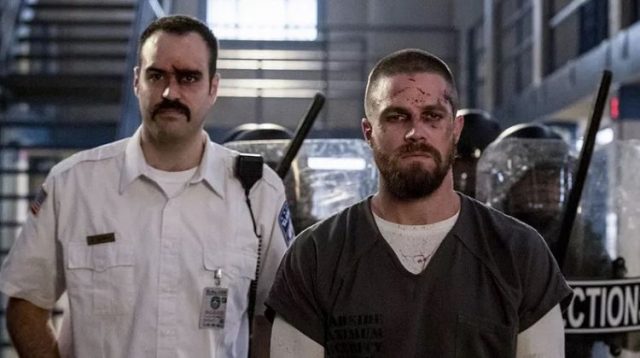 There is a subplot with Diggle, Lyla and Curtis, like I said, but it’s a simple A.R.G.U.S. op in Switzerland that sets up Diggle having to learn that his wife is secretly duplicating and offloading data to criminals, since she’s hit red tape, and is doing her own off-book op. This ties in well enough with the other storylines after Curtis discovers what’s going on, and it does force Diggle to confront his own politics as a former vigilante, and ultimately understand why Lyla is doing what she feels she has to do. This entire episode felt like an especially inspired exploration of Team Arrow’s legacy as vigilantes, even with their vigilante identities seemingly lain to rest at this point. Like I said, I doubt that the show’s leads won’t ever find their way back to being vigilantes again, once Oliver inevitably gets out of prison, and Diaz inevitably becomes way too big of a problem for the conventional authorities to handle, but, “Crossing Lines” nonetheless made for a fantastic hour of examining the deeper meaning between what separates a hero and a vigilante. That question is probably going to continue to go under the microscope for Oliver, Diggle and Felicity especially over the next several weeks, with Oliver now surrounded by even worse criminals, Diggle now being party to espionage in his own organization, and Felicity unlawfully confining one of the Longbow Hunters. The longest standing members of Team Arrow are now seeing themselves push the boundaries of becoming criminals themselves in order to uphold what they believe to be the greater good. Arrow may have done the whole ‘inner darkness’ debate to death over several other seasons, especially with Oliver himself, but that just makes it all the more impressive that the show is finding an especially intelligent and forward-thinking new way to revisit one of the core ensemble conflicts that the series has so frequently built itself upon!