After hitting a speed bump with last week’s Cisco-heavy episode, The Flash seems to have radically overcompensated by removing Cisco entirely this week! Granted, he’s merely in hiding at his parents’ house after the whole brush with Cicada, but the show’s lead ensemble still didn’t manage to suffer in his absence, even with Team Flash being arguably two men down for now, considering that Jesse L. Martin is also taking a leave of absence soon, following a back injury (though Joe does appear briefly in this episode, leaning on a door frame, and later sitting on a couch). “News Flash” managed to be an especially strong episode for The Flash, one that mostly got the series back in solid form, presenting an actually interesting new take on a villain-of-the-week, while also setting up a potentially interesting new method through which new super-powered threats may start menacing Central City!

Apparently, after Barry and Nora punched away the satellite during The Enlightment in the Season Four finale, pieces of the Dark Matter-infused Thinker tech started raining down on the city, impacting several people. One of these people is the new Cicada, who was hit by a crucial piece of satellite debris after Nora changed the timeline, with her assisted hit altering the distribution of the satellite debris to hit the mysterious new Cicada instead of David Hersch, and thus creating a big new threat as a result. This initially seems like it’s going to be a bit hard to swallow, but by the standards of the Arrowverse’s reality, the idea of Dark Matter-infused tech does start making at least a bit more sense as it’s further explained. Even if it may not fully add up in the future though, it presents lots of potential for promising new threats, namely people that will fool the S.T.A.R. Labs metahuman detectors, since their technology has unnatural capabilities, even if they themselves don’t innately have metahuman powers! 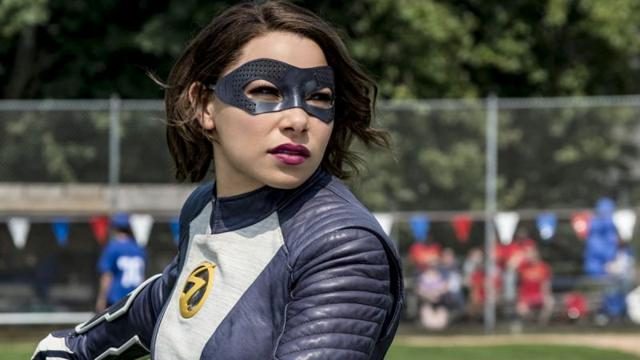 We got to see this new idea in action with our latest villain-of-the-week, Spin, who is easily the best C-list DC Comics villain that this season of The Flash has adapted so far. Spin, a male reporter in DC Comics lore, is once again gender-swapped in the reality of the Arrowverse, now being a female blogger named Spencer Young, who used to work with Iris at CCPN. Being desperate for fame and possessing questionable morals, Spencer’s blog, called, “Spyn”, ends up being spread on a smartphone that was empowered by DeVoe’s Dark Matter technology, which leads to anything it broadcasts coming true for the person seeing its shared contents. With Spencer eager to create stories, she thus uses the technology to ‘hypnotize’ people into creating sensationalized events around Central City, starting with a bombing attempt at Barry’s CCPD baseball game! This is actually a very creative and memorable new villain-of-the-week idea, and that’s very refreshing to see, considering that this season of The Flash has been especially unimpressive with its villains-of-the-week up to this point!

What also worked well with this show’s take on Spin (or Spyn in this case? Maybe?), is that it created a logical reason for XS to start gaining more fame and recognition in Central City. Since Nora and Spencer share a bit of a romantic spark (apparently Nora is a lesbian, which the show reveals here), bonding over Spencer’s love of XS, Nora starts wondering if Spencer really is that dangerous. This makes her extra vulnerable when Spin fails to realize that Nora is XS however, and later lures the speedsters to a stadium so that XS can kill The Flash for a headline! Barry has to try and fend off the hypnotized Nora while Team Flash isolates the location of Spin, who is predictably not far within the stadium, and fortunately, no one gets hurt in the end. Spin’s defeat is a little unremarkable, since she’s just taken off to Iron Heights off-screen (but isn’t she not technically a metahuman? Did they just throw her in a mens’ prison with the regular criminals?!), with ten minutes left in the episode no less, but the way that Spin is incorporated into the core plots this week feels very satisfying, particularly in how well it plays into some of the parenting differences between Barry and Iris, despite the two ironically not yet being proper parents in the present.

While Barry and Nora are trying to stop Spin, the truth that Iris attempted to suppress Nora’s powers in the future also happens to come out, and Nora has never quite forgiven her for it. Iris tries to claim that, whatever her reasons, they must have been valid, and this merely further strains her relationship with Nora. It feels quite evident that this has something to do with Barry’s mysterious disappearance in 2024, but whatever the case, Barry eventually takes Iris’ side, resulting in Nora vacating S.T.A.R. Labs’ lounge to go stay with Joe and Cecile. Barry and Iris forming a united front is sweet, even when Barry doesn’t outwardly agree with Iris’ politics, even though I doubt that this will ultimately have much effect on XS’ current career in Central City. Speaking of that, actually, while the character of XS has improved a bit since the start of the season, she still feels inconsistent in terms of how her abilities are being presented. Nora claims to be a very green speedster, yet once again, she easily puts out an entire office fire with a mere pep talk from Iris this week. Well then, I have to ask again; Is Nora a super-capable speedster prodigy or not? Considering how much Barry talks about the challenges of being a speedster and mastering those powers, this show is nonetheless making mastering speedster abilities look quite easy, considering how quickly Nora seems to be mastering everything!

Regardless, this just leaves a subplot that’s shared between Ralph and Sherloque, something that also serves as the only real furthering of the Cicada storyline this week. After Ralph pushes Sherloque to poke into the origins of Cicada’s mask, Sherloque seemingly laughs off the suggestion, particularly when the two visit the plant that Cicada works at (obviously, they don’t spot him), only to learn that the mask is so common that it could have been worn by any plant worker in Central City or Keystone City. After Caitlin participates in an ‘experiment’ (read: punching Sherloque in the gut) to prove that the new Cicada’s lungs are damaged however, Sherloque publicly commends Ralph on his lead, saying that Ralph was right to pursue the mask. This definitely felt like a C-plot that was heavily overshadowed by everything else, but it was nonetheless nice to see Sherloque and Ralph form something of a professional bond as detectives, and to have Ralph actually earn Sherloque’s respect this week. Ralph’s taken quite a few emotional hits lately (this episode even brings up the unfortunate meme that Ralph has been turned into online once again), so he could use the win!

“News Flash” very nicely made up for the frequent frustrations with last week’s episode, getting The Flash back on track with a much stronger offering. Not only did we have a much better villain-of-the-week in Spin, but we also opened the door for more comparably interesting villains to appear in the weeks to come. Central City must surely be running out of Particle Accelerator-powered criminals at this point, so it’s nice to see that there are other convenient ways for morally questionable folks to get powers in this town. There wasn’t much of Cicada in this episode, but that was fine, since the handful of scenes that did further the Cicada mystery did at least go somewhere interesting, especially when they helped to solidify a growing bond between Ralph and Sherloque. This helps Sherloque fit better into Team Flash, however slightly, while also giving Ralph something to do beyond just being Elongated Man. Even with Cisco entirely sitting this episode out, and Joe stepping away from the show for a while soon, it was nice to see the storytelling get a lot tighter and more satisfying this week, particularly since The Flash is taking next week off, alongside Black Lightning. If this show keeps coming back with more clever villains like Spin however, I’ll wait as long as I have to for Central City’s next threat!

The Flash 5.4: "News Flash" Review
The Flash rebounded with a strong episode this week, thanks to a very creative villain-of-the-week, and some solid character work for the heroes.
THE GOOD STUFF
THE NOT-SO-GOOD STUFF
2018-11-05
86%Overall Score
Reader Rating: (0 Votes)
0%