Doctor Who delivered a strong storyline last week, though it was definitely fans of Yas’ character in particular that would have gotten the most out of it. Fortunately, everyone got a chance to shine in this week’s retailer-themed episode, “Kerblam!”, which is definitely another highlight episode for Series Eleven, combining lots of classic Doctor Who charm with a modern sense of social commentary, which seems to be the favoured recipe of new showrunner, Chris Chibnall.

You’d never imagine that such a seemingly mundane retailer setting would result in such an excellent episode, but that’s just the first bit of creative satisfaction that’s delivered by, “Kerblam!”, and ‘delivered’ is definitely the right term for this week’s Doctor Who offering! After The Doctor receives a mysterious package from Kerblam!, the biggest retailer in the galaxy by some point in the future (think of it like a spacefaring version of Amazon), the package comes with a mysterious tag that says, “Help Me.” Spurred by the desire to help someone who may be in need, The Doctor and her companions thus pose as new hires at the main branch of Kerblam!, where they investigate who might be in trouble. This becomes all the more intriguing when it’s revealed that most of Kerblam! is run by perpetually smiling, over-the-top friendly robots as well, with only 10% of the workforce being humans, or, “Organics”, as they’re referred to. 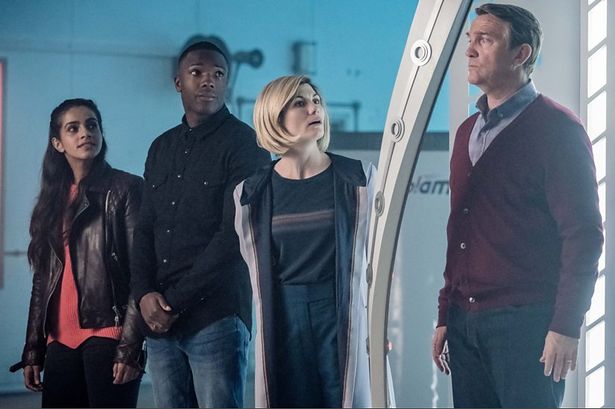 Immediately, the mystery hits the ground running with a smart setup, as The Doctor, Yas, Graham and Ryan all end up separated across different departments of Kerblam!, with Yas being the first to discover something sinister going on, after an employee that she befriends, Dan Cooper, ends up disappearing under mysterious circumstances. This leads The Doctor to instruct Graham to double down on his janitorial duties, which effectively grant him access to everywhere in the Kerblam! building, without making him look in any way suspicious. Ryan and The Doctor also find other human employees to ally themselves with too, despite finding no apparent evidence that anything is wrong at Kerblam! for most of the episode.

This mystery definitely took its time, but it also did a great job of holding the viewer’s attention by really making the proper effort to build up to what exactly is going wrong at the company. There were a lot of smart red herrings and dead ends, and from almost every angle, Kerblam! seems like an idealized company to be employed by, even if it’s mostly operated by robots. This exceptional friendliness was also further helped by a solid double act of human higher-ups, namely perky, yet odd human resources manager, Judy Maddox, and ill-mannered product manager, Jarva Slade. It points to one potential answer, as the corporate masters at Kerblam! immediately appear suspicious and dodgy, appearing to deflect by pointing out how everything at Kerblam! is automated. Slade becomes especially suspicious as well, after The Doctor discovers evidence that he’s been documenting missing workers! 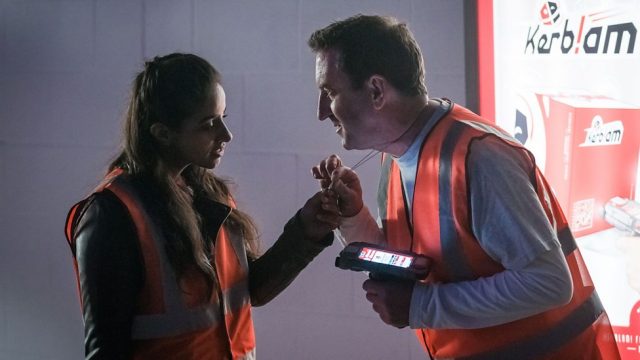 This was what made the eventual twist especially satisfying here; Judy and Slade were actually completely innocent in the end, marking a surprising portrayal of an all-powerful future corporation that actually isn’t corrupt and evil! Judy was unable to keep track of the missing workers because of the company’s sheer volume of employees, while Slade did notice them, taking analogue notes that the potentially rogue system of Kerblam! couldn’t recognize, while also not being able to loop in Judy, in case she was also behind the disappearances. The A.I. system of Kerblam! didn’t turn out to be the culprit either, instead being the one to send a distress signal across the galaxy, the one that The Doctor just happened to pick up. This eliminated the two most blatant opportunities for the episode to take the easy way out, and that was awesome! Instead, the real culprit behind the disappearances was revealed to be Charlie Duffy, Graham’s ‘cleaning mentor’ in the janitorial section, who was testing an experimental explosive bubble wrap (cutely referencing how people are compelled to pop bubble wrap after opening a package, even in the real world), to commit a widespread delivery-fueled terrorist act, through which the machine systems at Kerblam! would be blamed, which would compel the authorities from the nearby planet to make changes so that more human workers are demanded at any occupation.

The setup, pacing and final execution of the mystery were nigh on flawless this week, nicely keeping viewers on their toes, and delivering a resolution that felt clever and mostly pretty satisfying. The episode did still trip up a bit in the final few minutes though, since it slightly fumbled its aspired themes of how people can become both complacent and dangerous when they abuse technology and corporate structure alike, in many potential fashions. This problem mostly became apparent through the needlessly callous and cruel way that the episode killed off The Doctor’s and Ryan’s employee friend, Kira, whom Charlie also happened to have a crush on. If the system wanted to save lives, then why did it feel the need to kill someone to get its point across? Sure, it wanted to illustrate to Charlie the pain he would cause by blowing up millions of people, but that’s still killing an innocent person! Doesn’t that just prove Charlie correct when he claims that machines have no conscience? Moreover, if the system had the ability to break from Charlie’s programming and grab Kira in the first place, couldn’t it just directly tell her what was going on, and explain the killer bubble wrap to her? Killing Kira was both unnecessary and detrimental to the point of the episode, just as Charlie somehow escaping Yas to go get blown up by his own machines allowed him to completely take the easy way out, even if it did motivate Kerblam! to push for a human-first workforce in the end, without completely sacrificing some of its robot employees. At least that was a good compromise that didn’t get greedy with the episode’s social commentary.

Despite the one or two sour notes in the climax however, “Kerblam!” was still a superb episode of Doctor Who overall, and one that represents all of the strongest elements behind the show’s new creative direction. The setting was very innovative, while nicely calling back to some of the classic technology-based Doctor Who stories (The Doctor’s package in the beginning even contains a fez, humourously creating a joke around The Doctor placing an order back when she was still the Eleventh Doctor, and receiving it a whole two regenerations later!), plus the entire structure and execution of the overall mystery was almost perfect in every way! It’s too bad that the show didn’t completely stick the landing with making the A.I. platform of Kerblam! the unexpected hero, as it still had to create some questionable drama in order to force the villain to reveal himself, which shouldn’t have been logically necessary, since The Doctor had discovered his plan by that point anyway. Still, this is a great Doctor Who mystery that really flexes the storytelling muscle of having multiple companions at The Doctor’s disposal, while also providing just the right recipe of social commentary and charming, memorable fun. It looks it’s back to good, old-fashioned time travel next week, but I’m glad that we got a genuinely excellent spacefaring storyline before that, after this season’s previous one proved to be such a bust.