Doctor Who certainly hit an awesome high note with its Kerblam! mystery last week, and I can safely say that the previous week’s episode would certainly prove to be a very tough act to follow! Fortunately, “The Witchfinders” also turned out to be a pretty great episode, as The Doctor and friends once again go back in time, this time to the early 17th Century, to bear witness to some witch trials. They were allegedly going for the Coronation of Queen Elizabeth I, but it seems like the misbehaving TARDIS has once again made other plans. Is the TARDIS just fully insubordinate at this point then?

Whatever the case, all is naturally not well in 1612 Lancashire, as The Doctor’s crew find themselves in a mysterious village by Pendle Hill that even Graham, who is knowledgeable about witch trials, knows nothing about. After failing to save an accused witch from drowning, The Doctor tries to put a stop to things by using her Psychic Paper to identify herself as a professional ‘witchfinder’, demanding to be shown just what has the region so up in arms about the supposed influence of, “Satan.” This is naturally an opportunity to focus heavily on themes of female oppression, one that also nicely ties in with The Doctor now being female herself. Some of the commentary here does feel a little on-the-nose however, so some viewers may be annoyed at the show distracting from the mystery to spout a feminist message that should be painfully obvious to everyone by the standards of 2018. 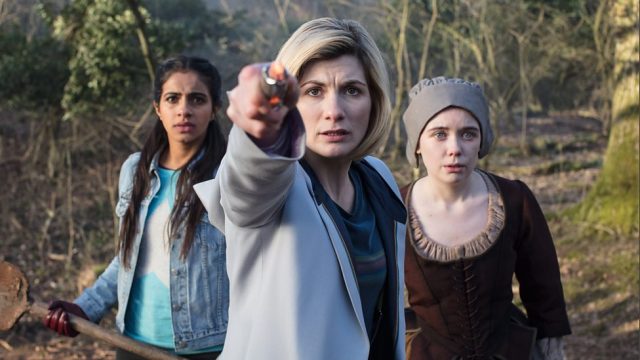 Things culminate with The Doctor ultimately being the next accused witch to be dunked, and while this again can feel a little heavy-handed, sometimes spotlighting The Doctor’s new gender for the wrong reasons (as I said in my review of, “Arachnids in the UK” from a few weeks ago, it’s not a good look when the series’ first female Doctor is portrayed as being weak-kneed and whiny), the final result is at least fitting, as The Doctor breaks free of her chains unseen, on account of some off-screen lessons from Houdini. The idea of accusing The Doctor as a witch actually fits quite well as an idea, considering that she’s a mysterious woman waving a magic wand to make things happen, but I’m happy to see that she’s still able to get herself out of a jam, and didn’t need to be rescued by her companions. It would have definitely undermined Whittaker’s Doctor if her own stupidity forced her to be pulled out of the river by Ryan or something! 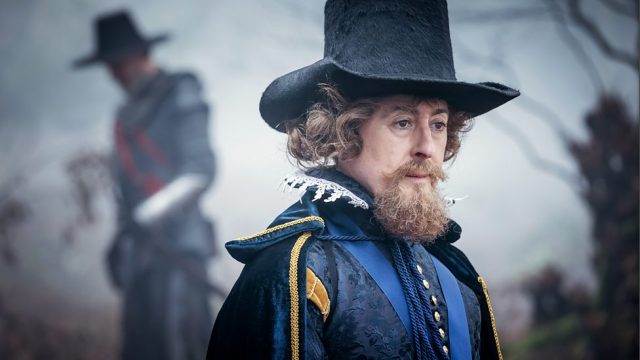 The ultimate reveal of the aliens behind everything is pretty good too, providing the explanation for why tensions have been running so high with Becka and the community. Apparently, in chopping down a tree that was blocking her view of the sun, Becka accidentally unleashed a criminal alien race called the Morax, who were imprisoned on Earth and turned into a primordial mud-like form billions of years ago. The result was Becka being infected by the Morax Queen, ironically making her the real ‘witch’ in the community, with Becka constantly sacrificing friends and neighbours to draw attention away from her own alien affliction. It’s a cold and shocking turn that feels fitting and dramatic, and contrasts nicely with King James I simply being in it because he’s a bit of a blowhard, albeit a very fun blowhard.

We even get a pretty great climax this week once again, as The Doctor discovers that the dunking tree being used to drown witches is actually made from the Morax’s prison wood, giving her the idea to chop it up and use it to make torches that can repel the Morax. This leads to a fairly exciting climax of The Doctor’s crew doing exactly that as they try to release Becka from the Morax Queen’s grip, though King James I nonetheless kills Becka and the Morax Queen, even though the rest of the Morax are successfully re-imprisoned in the tree. This is a bittersweet, but justified conclusion that feels appropriate, allowing The Doctor’s new ally in the era, the granddaughter of the drowned accused witch, to take up the mantle of being an actual doctor in a different region. King James I also presumably learned… Something. I will say that his reaction to the disappearing TARDIS is pretty priceless though, as he just innocently asks, “Where did they go?” in the final seconds of the episode.

“The Witchfinders” presents another strong historical Doctor Who mystery with a nice alien twist, just as, “Demons of the Punjab” and, “Rosa” did before it. The idea of incorporating alien influence over witch trials is pretty cool (and also nicely separates Doctor Who from The CW’s competing Legends of Tomorrow, which already aired a witch trial-themed episode just a few weeks ago!), and the final tragic twist behind the true agenda and defeat of the Morax is well-executed. I could have done without some of the heavy-handed ‘female oppression’ commentary, which ranges from tolerable to overdone, but at least Alan Cumming’s King James I provided a lot of welcome levity to balance out the more somber thematic elements this week. There’s only a couple of episodes left in Series Eleven of Doctor Who, but by this point, I think Jodie Whittaker’s Thirteenth Doctor has really started to make her mark in earnest! Hopefully the next two weeks can maintain the strong momentum from the past few episodes, so we can close out the first female Doctor’s debuting season on a great high note!

Doctor Who 11.8: "The Witchfinders" Review
Doctor Who once again delivers a strong historical mystery this week, as The Doctor and her companions must discover the sinister secret behind some 17th Century witch trials.
THE GOOD STUFF
THE NOT-SO-GOOD STUFF
2018-11-26
86%Overall Score
Reader Rating: (0 Votes)
0%