Six episodes in, and it seems like we’re finally getting something of a proper new super-villain obstacle for Jefferson and Anissa during Black Lightning’s second season, if we’re not counting Anissa having not suited up as Thunder this week. Tobias Whale can’t have all of the fun, after all, especially if he insists on just kicking around his penthouse while declaring how much of a badass he is, while actually doing very little to directly menace Freeland. Even Tobias got a chance to be a little more useful and driven this week though, though he’s still getting Khalil to do virtually all of his dirty work for the time being.

Nonetheless, “The Book of Blood: Chapter Two: The Perdi” was another especially strong episode for Black Lightning this week, continuing the outstanding kick-off that the ‘Book of Blood’ arc enjoyed last week as well. A large part of this came from a strong introduction to South Freeland, a racially-segregated community adjacent to the proper cityscape of Freeland, which is divided into Caucasians, known as the ‘Sange’, and African-Americans, known as the ‘Perdi’. Apparently, these two communities have been divided since the end of slavery in America, and for a long thirty years, the Sange in particular have been ruled with an iron fist, somewhat literally, by Looker, a mysterious woman who appears to have the ability to enslave, enhance and kill anyone she chooses with a telekinetic-powered liquid metal substance.

Interestingly, Looker is actually portrayed as a hero in DC Comics lore, not a villain, though Black Lightning seems to be setting up the character as something of an antagonist in this case, even if it’s also hinted that the real danger to South Freeland is some other unknown party. Sofia Vassilieva does a solid enough job of portraying the superhumanly beautiful and dangerous Looker, but as much as it’s clearly established that she’s not above murdering her more disobedient followers, it’s also indicated that Looker actually isn’t responsible for Deacon’s death during last week’s episode, which may very well be a frame job that’s meant to implicate Looker and the Sange. Clearly, a conspiracy is afoot. Oh, and on a related note, yes, I am aware that the introduction of Looker as a fascist tyrant of South Freeland does create a bit of a continuity goof in the show, since Looker was mentioned by name as being a fictional comic book character that Anissa could cosplay as with Grace during Season One. I suppose this could be explained by the show’s Looker simply taking her moniker from the comic book superhero of the same name (which may explain why she appears to be somewhat of a villain on Black Lightning, with both her powers and her moral stance ultimately going against her DC Comics portrayal), but it is worth noting nonetheless.

Anissa’s investigation into South Freeland eventually leads to her helping to deliver two babies for the newly-widowed Anaya, with one being black, and the other being white, proving that a Perdi and a Sange have inter-bred, which is explicitly against the rules of South Freeland. This creates a ton of racial unrest, especially when the Sange start coming after the babies, with Looker creating a handful of super-strong and super-fast metahuman followers that Black Lightning has to step in and stop in a pretty cool action scene, while Anissa has to transport one of the babies to Freeland. Looker does end up getting ahold of one of the twins, essentially as an excuse to start targeting the main Freeland area, but at least Black Lightning has a lead, with the episode ending as he starts following the sentient liquid metal back to Looker. Even considering how powerful and seasoned Jefferson is as a superhero however, is he even capable of taking on Looker in a fight? I guess we’ll find out next week. 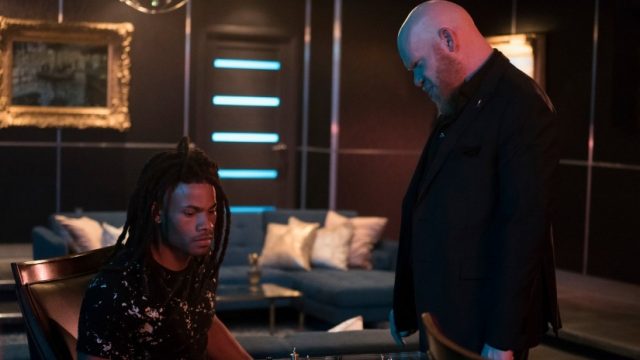 The device with Anissa inadvertently discovering the goings-on of South Freeland in an innocent effort to help a patient worked pretty well, nicely setting up Looker as a new threat, while also giving Jefferson and Anissa alike an actual excuse to don their heroic mantles again. Fortunately, Jennifer and Khalil also got a pretty strong story arc this week to boot, even if Jennifer was largely left to react to both Khalil and Lynn alike this week. Nonetheless, Khalil is seriously starting to challenge Tobias for the first time this week, after Tobias orders him to kill Reverend Holt, and Khalil ultimately finds himself unable to do it. This actually leads to another standout fight scene (did the show get a new fight choreographer? Because these hand-to-hand fight scenes are far better now!), wherein Tobias beats the hell out of Khalil, sending him back to Jennifer whilst covered in bruises. Khalil seems to want to run, but I doubt that Jennifer will let him go so easily. Since we’ve now clearly established that Khalil is defecting, and is clearly no match for Tobias, could Jennifer actually be the one to succeed where her father failed? I think that the show should check in with Jennifer’s metahuman training again soon, but it’s good to see that the relationship between Jennifer and Khalil is still paying dividends, especially since Tobias actually got off his ass and properly did something this week, even if it still nonetheless came down to him abusing Khalil yet again.

The remaining subplot was spearheaded by Lynn, and once again, this storyline was very well done. Lynn has to deal with the fallout of Dr. Jace killing half of the pod children, addressing the families of the vaccine and Green Light victims that half of the pod children in her care have died. Lynn thus finds herself berated and harassed for Dr. Jace’s actions, particularly by one especially distraught father, and this leads to her shambling home to drink away her sorrows. Jennifer even has to comfort her mother after she finds her vomiting in the bathroom, utterly defeated by a situation that she has no control over. This provided a great source of drama for both Lynn and Jennifer, since we’ve never seen Lynn so down and vulnerable, nor have we seen Jennifer actually have to be the one to be the mature voice of reason. It was a well-utilized opportunity to flip the perspectives of the characters, and have Jennifer be the unlikely motivator in helping her mother get back on her feet. As much as she didn’t directly participate in events, Jennifer felt like as much a hero in this episode as Anissa did, ultimately finding a way to reach both Lynn and Khalil with deceptively effective wisdom, particularly considering that Jennifer is often such a seemingly immature character in many instances. 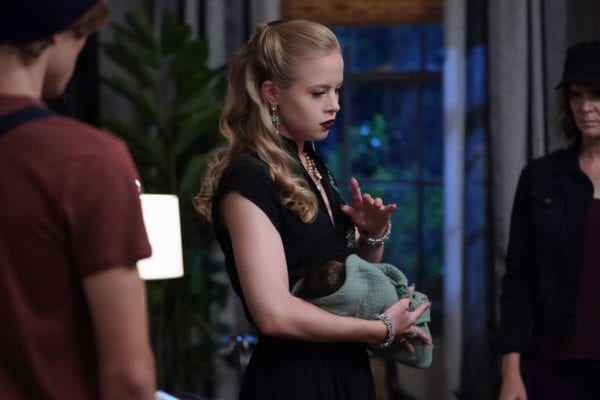 Oh, and Gambi is alive. I have to admit that this is the one point of the episode where I rolled my eyes, since the way that the show reveals when and how Gambi survived the attack on him is pretty lame and anti-climactic. The show should have waited at least one more week to address the fate of Gambi, especially since he contributes nothing of value to the episode and could have easily been cut out, beyond an interesting radio tease of regicide and unrest in Markovia, a fictional country in the DC Universe that has been featured on both Arrow and Supergirl, no doubt an Easter egg for later. Outside of that one odd creative choice with Gambi though, “The Book of Blood: Chapter Two: The Perdi” pretty much fired on all cylinders. The more uneven and slightly more drab storylines of the ‘Book of Consequences’ arc have thankfully given way to some far better and more consistent storylines in the ‘Book of Blood’ segment, especially now that South Freeland creates a credible metahuman threat to start fully demanding the presence of Black Lightning and Thunder again. We have one more episode in the ‘Book of Blood’ arc, so it’s possible that the whole South Freeland/Looker issue may be resolved by next week, but personally, I wouldn’t mind if Black Lightning indulged its actual superhero element a little more this season, so it’d be ideal if Looker really isn’t the beginning and the end of every single problem in South Freeland.