With the South Freeland arc neatly (a little too neatly!) wrapped up after the events of last week’s episode, a dramatic new story arc begins on Black Lightning this week. With Jennifer and Khalil both deciding that they’ve had it with their respective situations in Freeland, the two decide to go on the run together, with both being pursued by their keepers as they desperately try to make it out of the city. This makes an attempt to lean into the fact that both Khalil and Jennifer have stood as two of the best characters in Black Lightning’s sophomore season so far, and, “The Book of Rebellion: Chapter One: Exodus” doesn’t disappoint when it comes to creating some intense circumstances that primarily revolve around them!

Even with Looker now being defeated and handed over to the ASA, this week’s Black Lightning episode did a pretty solid job of restoring some of Tobias Whale’s menace, while also motivating him to actually take some direct action when it comes to finding Khalil. Tobias does eventually resign to hiring more mercenary help this week however, even if new recurring villain, Cutter is off to a decent start, providing a pretty strong wrap-up to the episode, after Jennifer and Khalil inevitably end up cornered at a specific location. The ‘Book of Rebellion’ arc needs to stretch past one episode, so the show has to contrive an excuse to keep Jennifer and Khalil unrealistically eluding capture for at least one more week, which I imagine will be fixed by the end of next week’s midseason finale, but the tense hunt for Jennifer in particular does provide an excuse for the Pierce family to go back to resolving some relatable human drama in the wake of Gambi’s disappearance, while also finding a good excuse to keep Jefferson’s and Anissa’s superhero costumes on at the same time.

Despite some of the great material shared by the rest of the Pierce family this week however, the core storyline with Jennifer and Khalil is still plenty strong, allowing the two teenagers to try and see how well they work together during a very intense situation. The episode immediately starts strong with Khalil inadvertently starting a massive firefight with some members of The 100 in an effort to secure some quick cash, and having to be bailed out by Jennifer in the process (I told you that it wouldn’t be long before Jennifer was using her powers to save Khalil’s ass!). From there, Jennifer’s intelligence and Khalil’s motivation work surprisingly well together, as the two manage to put their heads together and stay out of sight. Even Jefferson and Gambi have a hard time locating the two runaways, to the point where Black Lightning is even ripping the hoods off of the wrong cars! In fairness though, that was a pretty outrageous coincidence to have two Jennifer and Khalil lookalikes driving the exact same car that Jennifer and Khalil took off in. That’s just cruel on the universe’s part!

While Jennifer and Khalil attempt to hide at Khalil’s aunt’s house, the only place where they can easily avoid detection from authorities and prying eyes (not that Henderson gets very far locating Jennifer in the end either), Jefferson, Anissa and Lynn confront their own supposed failings when it comes to keeping Jennifer safe. This also creates an easy opportunity for Lynn and Anissa to react to Gambi still being alive, which Anissa is especially angry about, as she bluntly calls Gambi out on his lies. Anissa gets similarly aggressive with Jefferson to boot, also bluntly stating that Jefferson drove Jennifer away with his over-protective nature. Lynn, meanwhile, once again finds herself at the bottom of a bottle, tearing apart Jennifer’s room in a fit of anguish. Lynn’s growing drinking problem seems to be becoming a more blatant issue, even more so than the occasional spats between Jefferson and Anissa, and it’s actually quite distressing to see just how much Lynn has turned to alcohol over the past couple of weeks! I’m sure it won’t be long before the show directly addresses this too! 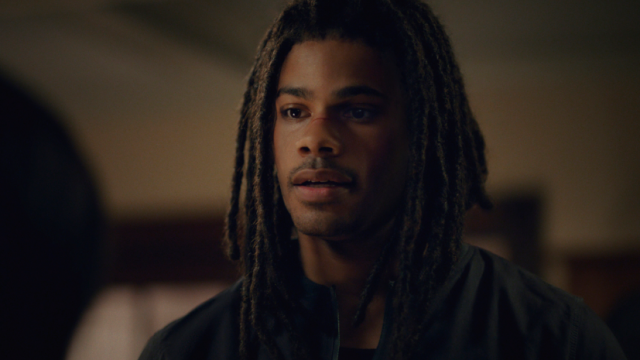 Tobias, naturally, is a lot less patient and a lot less gentle, even before he calls in the cavalry. There’s a standout scene where Tobias goes to intimidate Khalil’s mother, despite his, “No killin’ mamas” rule, but he still doesn’t really get anywhere here, with Khalil’s mother standing firm against him. Tobias’ clear respect for Khalil’s mother, which he voices when he asks, “How did you end up with such a weak-ass son?!”, is pretty great, showing that in his own twisted way, Tobias does have principles, principles that Khalil chose to reject just as much as Jennifer chose to reject her family’s wishes. Despite his harsh nature, Tobias genuinely seems to want to round up Khalil alive (even if it’s just to beat Khalil to death once he’s re-captured), hiring a mysterious fixer from his past named Cutter to do so. Cutter doesn’t appear to exist in DC Comics lore, even though it seems like she should (there is an entirely unrelated obscure Batman foe called ‘Cutter’, as well as Green Arrow enemy, Carrie Cutter, a.k.a. Cupid, but these are obviously unrelated characters), and interestingly enough, she’s got recurring status, so she may very well have a greater role this season than Looker did. That would be nice.

Cutter, as you can imagine, is a deadly knife expert, providing a solid opportunity for some more action during the episode’s climax, when she corners Jennifer and Khalil at Khalil’s aunt’s house. We get a pretty awesome fight between Cutter and Khalil here, which Black Lightning and Thunder are thankfully able to intervene in before it gets out of hand, thanks to Khalil’s mother relaying the location of Khalil to Lynn after Tobias’ visit. This heightened brawl certainly delivers plenty of excitement in the episode’s closing sections, though like I said, the show needs to contrive an excuse to keep Jennifer and Khalil on the run for at least one more week, meaning that they unrealistically elude capture, after Gambi follows them with a low-flying, highly lit-up, extremely conspicuous drone! Well, Gambi was just asking for that drone to get fried by Jennifer, so that’s on him. Not only that, but both Jefferson and Anissa somehow failing to secure Jennifer and Khalil, despite Khalil getting an injured leg in the fight against Cutter, is pretty head-scratching, not to mention that Jennifer and Khalil avoiding detection by Jefferson on account of simply hiding under some leaves is pretty pathetic. How are Jefferson, Anissa and Gambi alike suddenly having so much trouble tracking two reckless teenagers with no survival experience?! 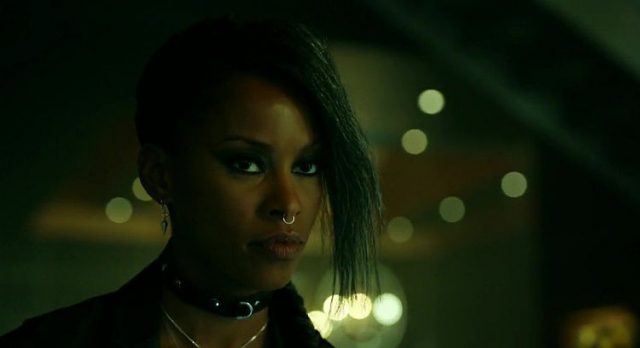 Still, at least we get a promising setup for next week’s midseason finale in the end, as Jennifer and Khalil are forced to flee into the woods, with Black Lightning and Cutter separately in hot pursuit. It’s frustrating that this otherwise strong Black Lightning episode couldn’t quite stick the landing, since it clearly wrote Jennifer’s and Khalil’s runaway effort into a corner, and had to make the other characters unrealistically incompetent to allow the teens to somehow get ahead of their more skilled and experienced adult pursuers, but just about everything else offered a very strong mix between thrills and drama this week. The show is finally doing a great job of balancing its human element with its superhero element again, when the previous two story pods for Season Two were slanted in favour of the former, and then the latter, so I hope that the same balance holds true for what is likely the conclusion of the ‘Book of Rebellion’ pod next week. Since Cutter apparently has a decent-sized role this season, I imagine that Khalil may make a cleaner getaway than Jennifer in the end, before Black Lightning goes off for its lengthy midseason break after next week’s episode, but we’ll have to see. Jennifer’s journey to becoming DC superheroine, Lightning is still taking its time, but fortunately, both Jennifer and Khalil maintain some of the best character arcs this season so far, so I’m still not complaining with 2018’s final story pod of Black Lightning episodes focusing squarely on them!

Black Lightning 2.8: "The Book of Rebellion: Chapter One: Exodus" Review
Jennifer and Khalil go on on the run in an exciting and dramatic Black Lightning episode this week, one that has the Pierce family confronting their supposed failures as examples.
THE GOOD STUFF
THE NOT-SO-GOOD STUFF
2018-12-06
88%Overall Score
Reader Rating: (0 Votes)
0%