The Gifted has spent a lot of time building up to a big game-changing event during this week’s midseason finale, and by the end of this episode, that certainly is realized. The aptly-named, “gaMe changer” ends off with a huge new status quo for the series, which should be exciting, and at least does present a ton of thrilling possibilities for the show’s return after its midseason break concludes on New Years Day. Frustratingly though, The Gifted really stumbles in the moment nonetheless, with, “gaMe changer” being a disappointingly flat midseason finale without any real sense of payoff, beyond the show simply demanding that you come back once 2019 gets started, in order to properly see what’s next in the wake of the Inner Circle’s next big operation.

This is really a shame, because the foreshadowing behind the Inner Circle’s next crucial mission has been pretty potent over the past several episodes. Their ultimate goal with Regimen, the mysterious company that Reeva has been gathering intel on after the Creed Financial heist, is a pretty massive one as well, since Regimen apparently controls all of the mutant-restraining collars that are used in prisons and mental institutions across the U.S.! I’m not sure how this works, since the collars appeared to be very simply programmed to shock mutants into submission whenever they detected any activation of the X-Gene in their system, and there’s been no previous suggestion that they required a server farm to operate in Fox’s live-action X-Men universe. I guess they do though, and knocking out this server farm at Regimen will effectively free every single restrained mutant in America, paving the way for the Inner Circle’s utopian mutant paradise. 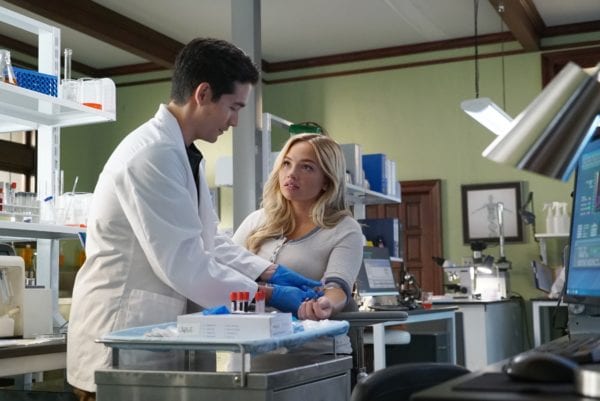 Meanwhile, the Strucker family is continuing to begrudgingly work with Madeline, despite Lauren quickly alerting her parents that Madeline is secretly developing a universal mutant cure with Lauren’s DNA samples. Thus, the entire Strucker family arc becomes about destroying Madeline’s work, with Lauren even convincing Noah to let her into the cold storage chamber, so she can see where all of the samples are kept. Apparently, Lauren can just perpetually force the door open with a tiny bubble, even from a great distance, which feels contradictory to how her abilities were previously established, but that’s the least of this story resolution’s problems. The show has to very awkwardly create a big confrontation with Madeline here, who suddenly does a very abrupt, clumsy heel-turn, suddenly claiming to the Strucker’s, when they’re inevitably caught, that mutants are a mistake that she needs to correct. Hang on, that’s not what she was saying before! Frankly, it just felt like the show couldn’t find a reasonable way to side with the Strucker family here, so it had to force one, in order to prevent this universe’s mutant problem from suddenly vanishing, in turn leaving this entire show, and all of Fox’s X-Men universe within this timeline, completely without a core conflict. Too bad for Disney, since that would have been a quick and easy way to conclude Fox’s standalone X-Men canon, before Marvel Studios regains the X-Men film rights on, ironically enough, New Years Day, when the Disney-Fox merger is said to be finalized, and any useful X-Men personalities are set to be rebooted, before being subsequently incorporated into the Marvel Cinematic Universe over the next few years.

John, Clarice and Marcos at least fared a little bit better in this episode, having a slightly more exciting storyline that had them hastily kidnapping a Regimen executive, in an effort to try and discover what the Inner Circle is up to. It’s this story arc that actually reveals just what exactly Reeva and her cohorts are up to, as the frightened executive spills to an increasingly impatient John that Regimen is responsible for regulating the mutant-restraining collars. Right when the remnants of the shattered Mutant Underground are about to gain a foothold in the ongoing battle against the Inner Circle however, the executive is suddenly shot dead by Fade, who infiltrates the clinic to prevent the Inner Circle’s plan from getting out! This gives us at least a little bit of action, but it also leads to another awkward story resolution, especially since we yet again have to bring in the Purifiers for more irritating stupidity.

The growing aggression by Turner and the Purifiers at least makes a bit more sense in this episode, after Rebecca’s horrific violence during the Creed Financial heist, but it still feels too difficult to buy that the Purifiers are anything other than an aggressive, bloodthirsty hate group. Turner goes on Benedict Ryan’s program to try and talk about how the Purifiers don’t want violence, and only want to help motivate citizens to assist in enforcing the country’s anti-mutant laws, but this immediately rings hollow when Turner’s own cronies start immediately opening fire unprovoked on John, Fade and Marcos just a short while later! Clarice at least gets out of dodge before this firefight, albeit in a rather forced way, since her conflict with John still doesn’t truly feel like it makes sense, even with John remaining rightfully suspicious of Clarice’s heavy connection to the Morlocks. Still, if this hypocrisy with the Purifiers is supposed to be social commentary, then the show is still laying it on too thick. Turner’s actions culminate in yet another clunky turn to end the episode as well, when John ends up pinned by a car, and captured by Turner’s Purifiers. Marcos and Fade get away, potentially setting up an uneasy alliance between a Mutant Underground member and an Inner Circle member for the midseason premiere in January, but personally, I think Marcos being captured probably would have made more sense. John should have easily been able to take out these Purifiers single-handedly, so I’m not sure how he got captured, when he’s both bulletproof and super-strong!

The strongest element of this episode is, once again, the storyline at the Inner Circle, particularly the one centering on Andy. Andy largely sat out last week’s episode, but he was able to return in a big way this week, since he and Lorna are the ultimate lynchpins when it comes to disabling the mutant collars, and freeing every single captive mutant in America. Before that however, Andy struggles with Rebecca being forced into a torturous confinement to prevent the abuse of her powers, and eventually decides to free her, urging that both of them should flee the Inner Circle! This leads to the one moment of the episode that actually perfectly delivered in terms of shock and drama, as Rebecca disobeys Andy to try and assassinate all of the Inner Circle’s higher-ups at once, only to have Andy impulsively try and stop her by throwing her into a pillar, which snaps Rebecca’s spine and kills her! This was a powerful way to have Andy not only choose the Inner Circle over his own freedom, but also unexpectedly take the life of his first love, which Reeva and Lorna naturally waste no time exploiting, in order to get Andy to go along with their new mission. Andy killing someone so important to him, even accidentally, is bound to have a massive impact on his character in Season Two’s back half, and no doubt for the remainder of the series. There’s just no coming back from this, even considering how broken Rebecca was, and I imagine that Andy’s character is about to undergo a very dark turn when The Gifted returns at the start of 2019!

Despite all of the excitement in the final moments however, between John being captured by the Purifiers, while Noah destroys all of Madeline’s samples at the same time as Andy rips apart the controlling server for all of the country’s mutant-restraining collars, “gaMe changer” nonetheless disappoints as a midseason finale for The Gifted, since most of it is so sluggish and dull. There obviously has to be a lot of buildup to such a big event as humans completely losing the entire mutant prison system in the blink of an eye, but the buildup is a little overdone, since anything exciting and noteworthy in this episode seems to happen in the final five minutes. The rest of the episode has characters talking in circles, facing arbitrary, forced conflicts, and transparently paving the way for whatever story turns are necessary to drive the season’s back half in 2019. This is frustrating, since we already had a ton of buildup over the past couple of weeks, which only led to more buildup in this week’s midseason finale, which led to a big turn that we won’t see the fallout of until the beginning of next year. Maybe The Gifted just wrote itself into too many corners, but considering all of the exciting story prospects it’s now opened up, the show could have closed out its 2018 run with many more consistent and smart thrills than what it ultimately delivers here.

The Gifted 2.9: "gaMe changer" Review
The Gifted stumbles with a frustratingly weak and sluggish midseason finale this week, despite a shocking conclusion that paves the way for a very violent mutant uprising.
THE GOOD STUFF
THE NOT-SO-GOOD STUFF
2018-12-06
65%Overall Score
Reader Rating: (0 Votes)
0%