Nintendo’s big new Nintendo Switch exclusive announcement at this year’s The Game Awards may have been, shockingly, a Marvel: Ultimate Alliance sequel of all things, but the Big N did have one other exciting reveal to share for the newly-launched Super Smash Bros. Ultimate! The game’s first DLC fighter was revealed at The Game Awards, and it’s another very unexpected third-party addition! As revealed in a slick pre-rendered teaser, one that unfortunately didn’t show any gameplay, the first DLC fighter that can be purchased for Super Smash Bros. Ultimate post-launch will be Joker, the lead character of Atlus’ highly beloved JRPG, Persona 5! 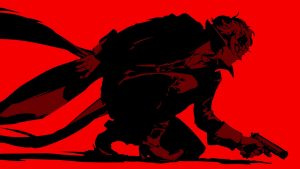 This makes Joker the second Super Smash Bros. character to be added to the series despite being primarily featured in a game that’s not currently available in any capacity on Nintendo platforms! The previous character with this unique distinction is another JRPG protagonist, Final Fantasy VII’s Cloud Strife (excluding heavily re-tooled NPC appearances for Cloud in some Kingdom Hearts games made for Nintendo platforms), though the OG Cloud that Super Smash Bros. now includes among its roster will finally be making his way to a Nintendo platform for the first time next year, when Final Fantasy VII receives a port for Nintendo Switch in 2019! Persona 5 meanwhile is currently exclusive to PlayStation consoles, being available for both PlayStation 4 and PlayStation 3 since its launch last year, with no other versions of the game currently known to be in development.

There are currently no details regarding Joker’s fighting style, or when he may become available to purchase for Super Smash Bros. Ultimate owners, but Nintendo of America president, Reggie Fils-Aime did tease that all five of the new crossover brawler’s DLC fighters will be all-new additions to the series that no one would ever expect to be in a Super Smash Bros. game! This likely means that most, if not all of the upcoming DLC fighters will be third-party characters. If Joker is the precedent we’re beginning with, that means it truly is anyone’s guess as to which personality may join the Super Smash Bros. cast next, especially if they don’t even need to be featured on Nintendo platforms to be eligible!