Warning: This review contains spoilers for The Heist, the first of Marvel’s Spider-Man’s three DLC add-ons. All of them combine to tell the story of The City That Never Sleeps.

After dealing with Demons and other threats to New York City over the course of his latest game’s impressive main campaign, Spider-Man found himself dealing with another big bad near the end of his first DLC outing. The monster in question was Hammerhead, whose bad deeds and nefarious plans affected what happened during The Heist‘s short narrative, and continue into the game’s second story-based add-on, Turf Wars. This time, though, things happen to be much more dire.

In Turf Wars, Spider-Man, Yuri and M.J. continue to explore the new, mafia-focused plight that is affecting their city. In doing so, they discover that Hammerhead wants to not only take over the territory owned by each of the city’s several mafia dons, with whom he wishes to do away with, but to also better himself in the process. How, exactly? By augmenting himself. Thus, he’s poised to become an even greater, and much more powerful, threat.

The story, itself, is relatively interesting and requires some good, old-fashioned stealth and exploration. Things like creeping into Hammerhead’s dilapidated old hideout, taking pictures of his plans and listening to an audio recording or two. Of course, this DLC would be boring stuff if it stripped away Spider-Man’s powers, leaving only stealth in its wake. Of course, there’s lots of action to look forward to, as there always is; it’s just that one should go in expecting to have to be quiet, thoughtful and analytical at times. This is especially true while sneaking into said hideout, as well as during a stealth mission wherein one must use a spiderbot to gain access to certain parts of a boozy criminal establishment, in order to eavesdrop on some shady conversations. 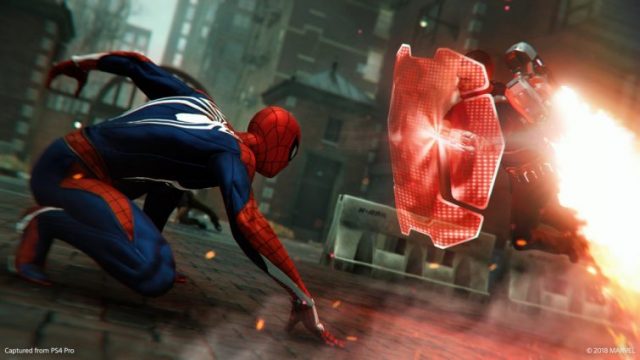 For the most part, this add-on is like everything that came before it, and that’s not exactly a bad thing given how good Marvel’s Spider-Man is. However, like its predecessor, Turf Wars fails to reach the same level as the main game. It’s pretty fun, but it’s just not as good or as deep, but that’s not terribly surprising either. There are, after all, only several story missions, and those are complemented by more Screwball challenges, city crimes and mafia hideouts to tackle at your leisure. The Screwball challenges are more difficult this time around, and feature a new type, that being a stealth challenge wherein one must take out a group of enemies without being spotted, either by them or by moving motion sensor cameras.

In actuality, one of Turf Wars‘ biggest flaws is its difficulty. While The Heist was challenging, this follow-up takes things to another level, and really throws everything but the kitchen sink at you. It actually drops Spider-Man into a rather difficult and overwhelming fight right off the bat, and doesn’t really let up much in this regard whenever combat is concerned. There are new enemies to deal with, including shielded foes who not only have that advantage but also use jet packs to get around. They’re difficult to deal with when you’ve got upwards of ten other enemies to manage and fight at the same time, and they make things even more challenging by creating lava-like trails that burn and damage Spider-Man whenever he stands on them.

The above-mentioned new foes just add on to a DLC story that already introduced heavies with miniguns, who still play a role here. Thus, those who play on anything other than easy will have to be smarter with their approaches and take enemies out systematically. It’s easier to die here than it ever has been before — at least in terms of Marvel’s Spider-Man — and some frustration certainly will result from this everything but the kitchen sink approach to combat. 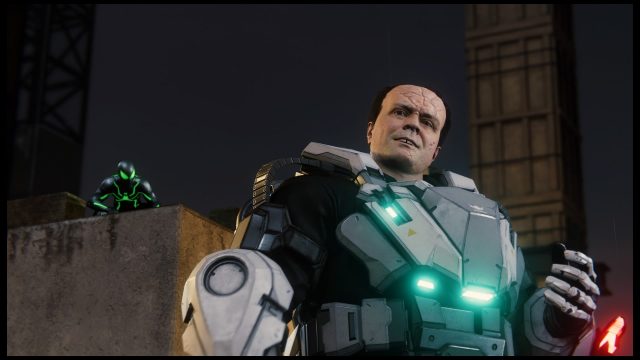 I don’t really need to talk about the presentation, but I will mention that it’s more of the same great stuff that we fell in love with during the main game and the first part of this three-part expansion. The game continues to look beautiful and sound great, and Turf Wars offers even more to gawk at, which is aided by flawless performance on PS4 Pro. There’s a lot going on on-screen, too, especially during the final mission, with its frenzied and rather challenging battle in front of a cement mixer, as well as the difficult and fast-paced boss battle that follows.

If you’re a fan of Marvel’s Spider-Man, you’ll want to pick this second of three add-ons up. It’s a pretty solid affair, even though it doesn’t reach the same heights as the main game. Then again, given how high those heights were, it’s almost unfair to expect that.

There’s some good fun to be had here, despite some frustration and an unnecessarily cheap difficulty level, and the new suits you can unlock certainly sweeten the pot.

**This review is based on a copy of the game and its DLC that we were provided with.**

Marvel's Spider-Man: Turf Wars DLC Review
Turf Wars is a decent second story add-on for the great game that is Marvel's Spider-Man. It's not as good as it could've been, though, and is somewhat uneven. Not to mention quite challenging and occasionally cheap.
Visuals93%
Audio91%
Gameplay73%
Storyline72%
The Good Stuff
The Not-So-Good Stuff
2018-12-23
72%Overall Score
Reader Rating: (0 Votes)
0%