Gotham’s drastically different fifth and final season had to spend the entire season premiere laying out the altered stakes and landscape last week, but fortunately, that’s out of the way now. Now, we can start digging into some more interesting storylines in the ruined Gotham City, or at least, that would be the logical approach from here. “Trespassers” certainly did give us a chance to start poking around some different corners of Gotham City this week too, specifically when Gordon and Bullock have to seek out some kidnapped children to return to the ‘green zone’ at the GCPD precinct. Surprisingly though, it was the subplots that stood out most this week, with both Bruce and Nygma presenting some intriguing developments that offer some solid promise for later.

The main storyline of this episode builds off of the fleeing kid that was recovered at the precinct last week, who tells Gordon that a bunch of other kids like him are being held captive by a gang called the Soothsayers. Apparently, the Soothsayers huff a mysterious gas that gives them enhanced physical stamina, and in high doses, they can apparently see the future, hence the name of the gang. This is never really clarified one way or the other, and since there’s no gang called the Soothsayers in DC Comics lore, you can imagine that this is a very temporary obstacle for Gordon and Bullock, who brave the ‘dark zone’ of Gotham City to get to the lost kids. 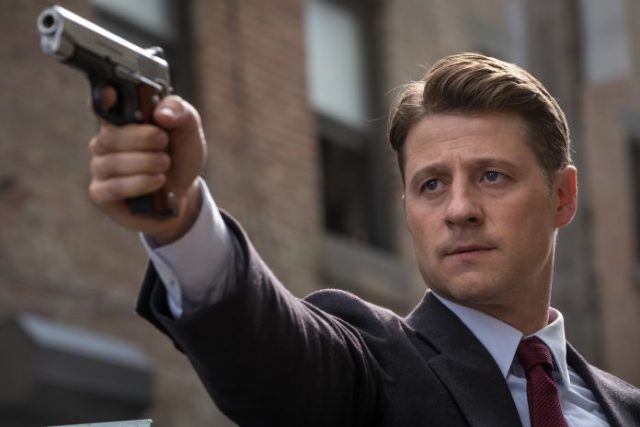 The idea of Gordon and Bullock having to fight through several gangs to rescue hostages sounds very cool, but the way that the show executed it here feels a little bizarre. Despite taking a battering in the dark zone, Gordon’s and Bullock’s vehicles never really feel compromised, and while they eventually run low on bullets, this doesn’t often become an issue either. Instead, Gordon simply walks in and takes the kids after Bullock and a few other cops hold the Soothsayers at gunpoint, before everyone quickly escapes once a gunfight inevitably breaks out. How Gordon and Bullock navigate around the pursuing Soothsayers is constantly suspect, especially when a Day of the Dead-inspired gang end up cornering them at the same time as the Soothsayers, who inexplicably track them down after another incident. This turns out to be a non-issue as well however, since Barbara just ends up bailing Gordon out by killing everyone with an APC that she pretty much pulled out of her ass (the show makes mention of Barbara stockpiling armoured vehicles, but never really explains how or why), no doubt setting up a favour that Gordon will have to pay toward her later.

Sandwiched within this conflict with the Soothsayers and these Day of the Dead stooges (are they supposed to be a homage to that Day of the Dead-esque gang from 1995 movie, Batman Forever?) is Gordon and Bullock temporarily taking shelter in a creepy house, only to discover another child in there. After the child tricks Gordon and Bullock into getting locked in a room with a knockout-inducing light however (is that a thing?), they manage to fight off the boy’s deranged ‘mother’, who appears to just be some random woman that kills people and steals their things. Gordon and Bullock eventually manage to escape and take the kids out, and the idea is perhaps that Gordon can’t save everyone in Gotham City, but this wasn’t really expanded upon in any meaningful way. It was just another thing that made the core Gordon/Bullock subplot feel messy and sloppily-executed this week, which was disappointing, since I’m always up for a good Gordon/Bullock rodeo in this town. Yes, I know that these characters were teased in the Season Four finale, where they were believed to be a loose nod to lesser-known Batman villain, Ventriloquist (who was planned to be introduced this season, but the showrunners couldn’t ultimately find a way to realize him in the Gotham universe, sadly), but that doesn’t automatically make them useful or necessary. 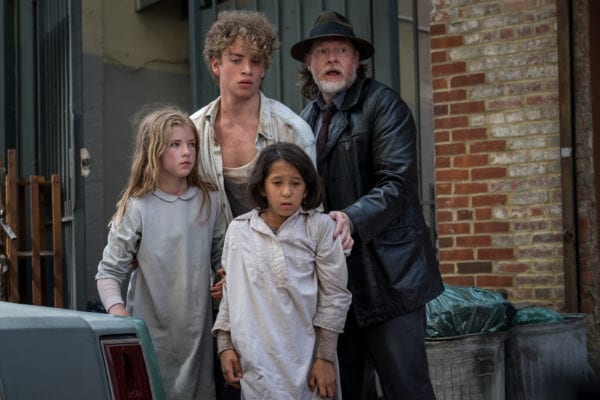 As I said, the subplots made a much better impression on this week’s Gotham episode, with Nygma occupying the highlight storyline. Nygma simply bumbled around and barely accomplished anything during the season premiere last week, but this week, he was thankfully given more to do. After trying to tie himself down to prevent his, “Sleepwalking”, Nygma soon after discovers that this tactic didn’t work, and he kidnapped a member of the Street Demons gang the previous night, who is tied and tortured in his bath tub. After having to torture the guy again to get the information that he didn’t remember getting before, which was pretty hilarious, Nygma learns that he sought out the Street Demons to get to their leader. After taking the gang member to the gang hideout though, Nygma sees that someone, possibly his Riddler personality, has killed all of the gang members, and seemingly framed Penguin for it. This is intriguing, since the tortured gang member claimed that Nygma was, “Stiff” during the initial torture, which certainly doesn’t sound like his Riddler side, but then again, who else would have reasonable motive to frame Penguin? Is Nygma subconsciously wanting to torment Penguin again, or is Nygma also being played during this sequence of events?

Bruce, meanwhile, has to go find the, “Witch” that can apparently help Selina this week, and yes, turns out I was bang on the money; Ivy is the ‘witch’ in question. After a group of scared survivors appear to have captured Ivy, soon after telling Bruce that they’re going to burn her alive for the people she’s killed, Bruce tries to appeal to Ivy’s humanity, with Ivy claiming that the plants at the park she’s hiding in are acting of their own accord. Obviously, this is a lie (Bruce seriously fell for that?), and Ivy ends up killing the rest of the survivors, with Bruce finally having to resign himself to the fact that Ivy is likely beyond redemption at this point. Ivy does however present Bruce with a special seed that can apparently cure Selina, before going off to parts unknown, possibly marking this as her last appearance on Gotham. Regardless, the seed appears to cure Selina’s paralysis, though Selina displaying cat-like eyes at the end of the episode naturally proves that there is a big catch here. Bruce having to take a leap of faith with Ivy is nicely dramatic, but will Selina’s inevitably violent turn put her on the final path to truly becoming Catwoman? On that note, I imagine that Selina is probably going to be the one to draw out Jeremiah again, since she’s inevitably going to want some bitter revenge against the man who crippled her! 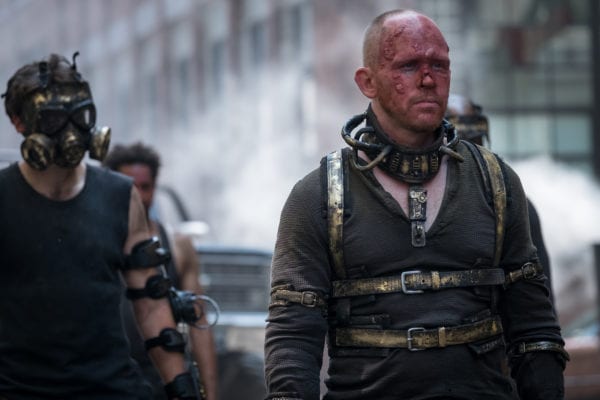 This week’s Gotham episode at least ends on a more hopeful note from another perspective, as a new haven is discovered for the survivors in the green zone, complete with apartments, gas and running water. It’s a little narratively convenient, but whatever. Gordon could use a win. “Trespassers” thus still feels like it’s primarily setting up events to come for Gotham’s climactic season, but the show is starting to gain some additional momentum. This episode didn’t feel like nearly as much of a slog as the season premiere did, even if the core Gordon/Bullock storyline still felt too contrived, and largely failed to impress. Nonetheless, the highly amusing Nygma subplot, and the nicely dramatic Bruce/Ivy subplot, helped to elevate the episode, and present more promising stakes for the weeks to come. With the new survivor haven, taxed resources can hopefully become less of an issue for whatever heroes remain in Gotham City, but with Nygma likely igniting war with Penguin yet again, the violent criminals that still own the majority of the abandoned city are only going to become more out of control from here!

Gotham 5.2: "Trespassers" Review
Gotham picks up some momentum this week, thanks to some solid subplots, even if the core Gordon/Bullock storyline still feels a bit lacking.
THE GOOD STUFF
THE NOT-SO-GOOD STUFF
2019-01-11
77%Overall Score
Reader Rating: (0 Votes)
0%