With the bombshell revelation that the other Green Arrow running around Star City is in fact another half-sister to Oliver, Arrow immediately shifted focus to this new hidden Queen sibling during its midseason premiere this week. The aptly-titled, “My Name is Emiko Queen” began properly fleshing out Star City’s newest hero, along with her mission and reason for putting on the hood (predictably, she’s also no longer the daughter of Robert Queen and Shado in the Arrowverse, but is instead the daughter of Robert and some other woman named Kasumi Adachi in this case), while a handful of subplots also began laying some groundwork for 2019’s new story developments, including an especially intriguing and controversial decision being shared between Diggle and Lyla at A.R.G.U.S.

Emiko’s character is a pretty cool throwback to the original take on Oliver, all the way back during Arrow’s very first season in 2012 and 2013, complete with her very own list of criminal targets, and a pretty liberal stance on murdering bad guys. The question of how Emiko so perfectly copied Oliver’s arrows and costume, when it’s revealed here that she quite clearly has no resources and no money, doesn’t really add up, and feels like it’s a holdover from the show trying to preserve the mystery of Emiko’s vigilante identity during most of this season’s front half, but that’s a minor quibble that’s easy to overlook. The advantage, in any case, is that Emiko can keep the show’s old-fashioned mentality on vigilantes alive, despite Oliver now being an officially deputized member of the SCPD.

Despite Oliver’s big promotion though, he actually ended up getting the shaft in this midseason premiere, which was kind of a let-down. Instead of actually putting his new police connections to use, outside of one rushed scene where it’s predictably established that not every cop and CSI is happy to have a former vigilante among the SCPD’s ranks, Oliver is instead left to discover the identity of Emiko via a blood sample that she conveniently left at the aforementioned crime scene, which Felicity can conveniently analyze. Yes, needless to say, this is a pretty lame way for Oliver to discover that he has another sister (Emiko seriously never shed blood at a crime scene before now?), but the fact that he spends the entire episode moping about his father’s infidelity after learning about Emiko’s existence quickly becomes far more frustrating. Oliver has plenty of time to go find his sister, so why is he wasting literal hours bitching about a past that he can’t change? I get that it’s a shock, but surely Oliver’s emotional constitution should be a lot better than this by now?

More promising at least is Rene forming an alliance with Emiko, after intervening in a mission of hers. Rene’s confession about not being able to move on from his vigilante days, despite the rest of the show’s heroes finding ways to do so, is actually fairly interesting, and sets up a legitimately effective Emiko/Rene dynamic for the rest of the season. Curtis is also finally given something to do outside of A.R.G.U.S. as well, filling the ‘Felicity’ role for the newly-minted Team Arrow 2.0, and thus overseeing Emiko and Rene as they finally corner Emiko’s criminal target. Obviously though, Emiko’s mission wasn’t going to be solved that easily. It turns out that Emiko is after her mother’s killer, and, rather inconveniently, the man she was targeting is innocent of the crime. This seems a little bit odd, since Emiko’s resources and training seemed so limitless at first (again, how did either of those come about anyway?), but at least this gives her an excuse to keep up her own Green Arrow campaign, even as Oliver greets her in the episode’s closing seconds, no doubt setting up a tense sibling relationship between the two throughout Arrow’s upcoming episodes. 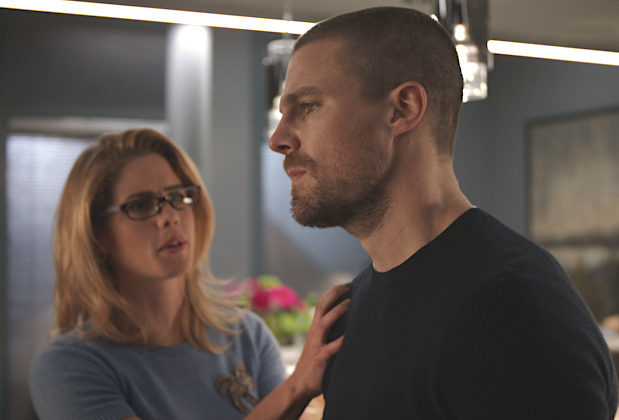 As for the subplot at A.R.G.U.S., it appears that Diggle and Lyla are offering Diaz a custody deal that keeps him out of Slabside, in exchange for valuable intel on a mysterious criminal named, “Dante.” Diaz is initially uncooperative, but after a visit from the deputy director, Diggle improvises during Diaz’s latest interrogation, and claims that Diaz will be offered freedom in exchange for his information. Naturally, Lyla and the deputy director are not happy about this rogue promise at first, and Lyla becomes even less happy when she discovers the true depth of Diggle’s plan; Reviving the Suicide Squad! Yes, Diaz is going to be the first recruit for yet another incarnation of the infamous Task Force X on Arrow, and this one will be post-Amanda Waller to boot! This entire subplot basically amounted to one giant tease that another Suicide Squad incarnation is coming to the show (apparently as soon as next week), which is a little surprising, considering that Warner Bros. is continuing development on a Suicide Squad movie sequel, but oh well. It’s still a cool thing to look forward to for Diaz’s character, particularly after he’s already been bested by Oliver at Slabside.

This just leaves the flash-forwards as the only other major story element of note on Arrow during this week’s midseason premiere, and they do actually manage to go to interesting new territory here. In this case, the flash-forwards center almost completely around Zoe, who is visiting an older Rene, now the mayor of the segregated Glades. Rene is uncooperative and dismissive of the cause behind the, “Canaries”, Dinah’s apparent anti-Glades resistance group, but after some ‘convincing’ by Dinah, he does cough up the codes to some mysterious defense program called, “Project Archer.” There’s a lot of unanswered questions here, but getting a peek at the hyper-developed Glades of the future was interesting, as was seeing what Rene is up to in the years set after Arrow’s eventual series finale. The hint that Rene is actually a villain that is complicit in the murder of Felicity in the future is especially interesting, and I’m really looking forward to seeing how that develops, especially considering how effectively this episode cut between Rene’s crooked future self, and his present devoutly heroic self.

This was a setup-heavy midseason premiere for Arrow that didn’t present much in the way of real payoffs, but the heightened focus on Emiko mostly worked well, even if it meant shoving Oliver into the background in a rather forced, frustrating way. Overall though, “My Name is Emiko Queen” still manages to be a fairly solid midseason premiere for Arrow, especially with some cool teases for what’s to come on the show in 2019. Diaz spearheading a new incarnation of the Suicide Squad is something that’s sure to get avid DC fans in particular buzzing, while the flash-forwards present the intriguing promise of Rene eventually living long enough to become the villain, as it were. Interestingly, Arrow seems to be proceeding without a central villain for now, something that I’m sure will eventually be rectified during Season Seven’s back half, but maybe there’s opportunity there. After all, Season Seven of Arrow has excelled with its bold re-interpretations of the show’s established leads, and hopefully this ends up blending well with Emiko’s comparably effective callback to the show’s roots in the weeks ahead.