Warning: This review will contain spoilers from this season’s two previous episodes.

After learning of all of the troubles, and the eventual closure of Telltale Games, we weren’t sure if we’d ever see a conclusion to Clementine’s story. Thankfully, Skybound stepped in and offered to help some of the developer’s former staff members complete and release the remainder of The Walking Dead: The Final Season. Thanks to them, we can now play and talk about the season’s third and penultimate episode, Broken Toys.

When we last left Clementine and AJ, the two had survived a dangerous attack on their new home, which was carried out by the Raiders and their familiar face of a leader. At that time, players had to make a challenging choice, which involved choosing between saving one of two new friends. One could save either Louis, the happy and musical boy, or Violet, the angst-filled but friendly teenage girl. For the purposes of this review, and my own personal playthrough, I chose to save Violet because I’d developed a romantic relationship with her. I felt bad for Louis, though, and vowed to try to save him.

Broken Toys picks up in the aftermath of said attack, at which point Clem and the others are hard at work on their revenge. Their main goal, of course, is to save the three friends who were taken by the Raiders, but that doesn’t mean that they’ll hold any punches while doing so. How much damage is caused is left up to the player, though, when the plan is finally put into motion later on. 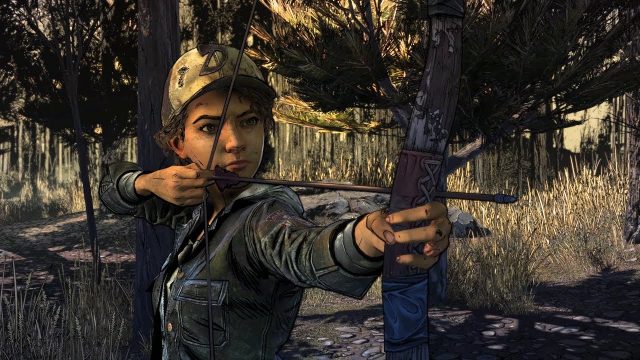 The opening parts of this episode pertain to reconnaissance, planning, and working with others. Early on, you’ll find yourself in the woods with some binoculars, with the goal of scoping out the gang’s ship and everything surrounding it. After that, there will be some downtime and even a party, where relationship and morale building are the key. It’s an act that starts out slowly but builds up as it goes along, over its two or so hours of run time.

Don’t worry, either. There’s lots of action, and some tough choices, to be found later on. I won’t say anything more, though, out of fear of spoilers. I worry that I’ve already said too much.

Overall, Broken Toys is a solid third and penultimate episode, albeit not a great one. It’s good, but struggles with some pacing issues. That said, it does offer some solid character development, en route to the grand finale, which will close out Clementine’s four seasons of The Walking Dead: The Telltale Series.

Fans of the series will have a good idea of what they’re in for here, especially if they’ve played the first two episodes of The Walking Dead: The Final Season. There’s all of the above, plus even more collectibles than before. This may not be the best of the three episodes, but it’s pretty solid and sets up a big conclusion.

The Walking Dead: The Final Season - Episode 3: Broken Toys Review
Broken Toys is a solid penultimate episode, and one that leads into what we hope will be a fantastic finale. We're honestly just thankful that it exists.
Visuals80%
Audio75%
Gameplay74%
Storyline73%
The Good Stuff
The Not-So-Good Stuff
2019-01-31
75%Overall Score
Reader Rating: (0 Votes)
0%