NOTE: Full spoilers for this preview episode of, “Hanna” are present in this review

Back in 2011, Focus Features released a sharp, dramatic action-thriller by the name of Hanna, an original story taken from the Hollywood Black List of pundits’ favourite unproduced scripts. Originally starring Saoirse Ronan, Eric Bana and Cate Blanchett in the lead roles, Hanna told the story of the titular teenage girl, raised by a former assassin, and mercilessly hunted by the CIA. Trained from childhood to be a killer and a survivor, Hanna would undergo something of a coming-of-age story as well, when she ends up in the company of a seemingly ordinary family, giving her a glimpse at what life looks like outside of the world of wet work. The concept was simple, but the execution was stylish, memorable and very emotional, leading to Hanna becoming one of 2011’s best dark horse hits on the big screen.

Despite only a modest box office intake, leading to the movie just barely breaking even on a minuscule budget, it would appear that Hanna is now getting a second lease on life, thanks to a television reboot that is set to be hosted on Amazon Prime Video next month. The first episode of Hanna was temporarily made available for Amazon Prime subscribers for one day however, with the entire ten-episode debut season planned to come to Amazon’s video streaming platform permanently in March. Doubling as early access to the pilot as well as a preview of what’s to come, the first episode of Hanna makes a strong impression, even if it’s mainly just following the early events of the movie for the time being.

Since this is a television pilot that’s just over forty minutes long however, there are additional scenes and more fleshed-out elements in Hanna’s origin that are new to this TV adaptation, along with some re-arranged dialogue and scenes, to keep things interesting for fans of the original Hanna movie. We see for example a harrowing and violent escape by Hanna’s father, Erik and Hanna’s mother, Johanna in the early moments, as they snatch the infant Hanna away from captivity in Romania, and try to make a getaway from ruthless CIA agent, Marissa Wiegler. Johanna is killed during the escape, much like the movie, and only Erik manages to get away with the baby, retreating into the wilderness in order to hide from the prying eyes of the CIA. It’s here where the series proper begins, with Hanna now being fifteen years old, and being trained in the art of survival by her father.

There’s an opening mock confrontation between Hanna and Erik that is very similar to the movie, likely an intentional homage, considering that this is one of the movie’s most well-known scenes, but the motivations of Joel Kinnaman’s Erik are actually quite distinct from those of Eric Bana’s Erik. Bana’s Erik was quite clearly training Hanna to battle and kill Marissa Wiegler, and even gave her a beacon for when she was ready to take on that challenge. In this television reboot however, Kinnaman’s Erik is training Hanna to survive because he never intends for her to join society! Hanna isn’t even aware of anything beyond the wilderness, despite getting the same highly detailed education and backstory that she also received in the original movie. This is an interesting and dramatic change in motivation that actually works as a solid new direction for Hanna’s television adaptation, allowing Kinnaman’s Erik to prioritize drama over thrills, providing a change from the more violence-focused Erik that Bana portrayed beforehand. 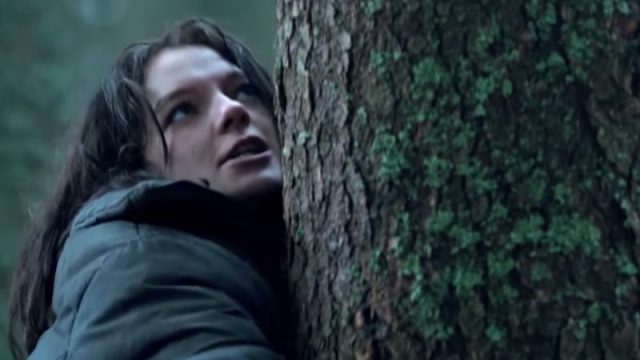 For now, we barely see Mireille Enos’ Marissa, but similar details regarding Hanna’s backstory are hinted at during the couple of scenes where Marissa does factor in, with her character sure to be a more prominent menace later in the season, or perhaps even the series as a whole. Instead, a more developed storyline in this episode involves Hanna striking up a friendship with a local Polish woodcutter named Arvo, after she defies Erik’s orders and wanders outside of her safe zone. This appears to be introducing the coming-of-age element to Hanna’s television adaptation early, earlier than the movie did in fact, by having something of an awkward relationship blossom between Arvo and Hanna. Arvo becomes something of a fleeting bridge to the outside world for Hanna, and actually ends up taking the place of the beacon from the movie in this case, since the two teenagers are caught by police after breaking into a communications array, which alerts Marissa to Hanna’s existence.

Fans of the movie might be a little bit mixed on this change, even if it does lean into the heightened focus on drama over action in this debut episode. As much as Esme Creed-Miles plays a strong new take on Hanna, one more vulnerable and curious than the more outright ruthless Hanna that Saoirse Ronan portrayed in the original movie, some may feel that Hanna no longer voluntarily summoning Marissa does somewhat reduce the presence of her character. Now, instead of boldly taking on the challenge of seizing her life, Hanna is simply a victim of circumstance, which doesn’t feel quite as satisfyingly bold. The trade-off here is that a season of television has far more time to develop and expand on Hanna’s character in interesting ways, compared to a two-hour movie, so depending on how the rest of the season turns out, maybe Hanna’s small screen journey will end up being just as impressive as her big screen one. If you can swallow Hanna being a lot less quickly capable in the television version of the story, at least at first, then you shouldn’t have too much trouble getting invested in this new take on the story nonetheless, because it is well-performed and very interesting.

Even if this first episode mostly treads a lot of the same ground as the original Hanna movie, beyond the major addition of Hanna’s early relationship with Arvo, the fact remains that this television reboot looks to be striking the same strong balance between action and drama as its big screen inspiration did. Hanna isn’t quite as badass or deadly out of the gate in this version of the story, but regardless, the small changes to the plot do mostly work to both feel faithful, and forge new territory for this adaptation. Overall, this is a very satisfying first episode for Hanna, and one that seems to hint that this may be the next big Amazon Prime Video series to keep an eye on, possibly giving this story far more exposure than it ever got during its original big screen take. We can only hope, but regardless of Hanna’s ultimate fortune on television, I’m very much looking forward to seeing the rest of the season next month, which could very well end up being just as smart and enjoyable as its cinematic inspiration, if this first episode is any indication!