The Flash has really been stuck in a slump for quite a while, but finally, it seemed like the show delivered a much stronger episode this week, without needing to rely on a crossover event! “Goldfaced” not only brought in a great new DC villain to serve as the backbone of a surprisingly novel conflict for Barry and Ralph, but a couple of solid subplots were also managed, as Iris ends up in the lion’s den while investigating Cicada’s house, and Nora tries to distract Sherloque with a very unexpected suggestion from Eobard Thawne in the future.

As the episode’s title suggests, the villain-of-the-week is a recognizable face from DC Comics lore, that being Goldface, an enemy of Green Lantern and The Flash alike in the printed panels, and one that just so happens to be the husband of Amunet Black in the DC Comics Universe! In the case of the Arrowverse, Goldface is Amunet’s ex-boyfriend, possibly suggesting that they’ll eventually team up and rekindle their romance later on, but for now, Goldface stands as the biggest black marketer in Central City, one that the CCPD can never seem to track down. Barry and Ralph have to start looking for Goldface once the metahuman cure is in the final stages of development, but since Cicada will need to be immobilized for a whole minute in order for it to work, they need to track down a special non-lethal stun weapon that was recently stolen from Van Horn Industries.

Since Goldface ends up with seemingly any bit of stolen tech in Central City, Ralph gets an old contact to tell him where to get to Goldface’s literally underground black market. Said black market also conveniently puts metahuman-dampening cuffs on all of the customers, plus the lack of satellite reception means that no one can be tracked, leaving Barry and Ralph completely powerless and without support. This leads to a very interesting scenario where the two men aren’t able to rely on their superpowers nor S.T.A.R. Labs to protect them, while they’re both in a whole complex full of criminals to boot. A setting like this made for an effectively intense and unpredictable core storyline in this episode, one that had Ralph trying to make use of his former affinity for shady folks, while Barry had to desperately try and hide the fact that he works for the CCPD. Obviously, Barry doesn’t make it very long, since he ends up blowing the heroes’ cover when he discovers police armour-decimating guns, and tries to buy all of them. It’s a dumb mistake, but honestly, it’s a dumb mistake that Barry would definitely make, since he has shown in the past that his heart is bigger than his brain when he’s in an intense situation.

Things get even more complicated once Goldface proposes that Barry and Ralph join him and his men on a job in order to make the situation right, following Barry lying about being an expert criminal chemist and cleaner. Apparently, Goldface wants to steal a valuable 3D printer that can print replacement organs, which he plans to use to get rich. This leads to another very interesting scenario, where Barry has to compromise his moral principles to get himself and Ralph out of the corner that his moral principles put them in in the first place. Ralph shutting Barry away so that he didn’t have to get his hands dirty was also a pretty inspired turn, especially after Barry finally admitted to himself that it’s naive to think that The Flash would never have to compromise his ideals. Barry nonetheless gets out of his forced confinement, and the two heroes are inevitably found out by Goldface soon afterward, leading to a great, tongue-in-cheek extended action scene, where the two take out all of Goldface’s men with stun rifles, and then discover that Goldface himself is a metahuman, which any DC fan would obviously expect. Despite Goldface’s power allowing him to manipulate golden objects and turn himself to gold as a means of defense however, he is eventually defeated, and while Barry and Ralph don’t get the weapon they were looking for because of this, Iris thankfully ends up getting another idea. 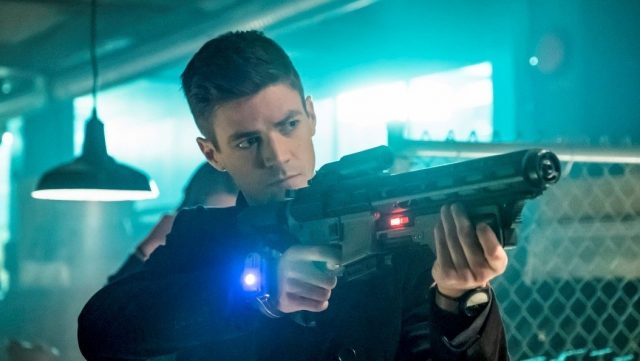 Now that Iris has properly started the Central City Citizen, she starts having trouble getting readers, and decides to start writing about Cicada to try and change that. After the waste of a storyline that Iris had in the previous episode, it was great to see her hit the ground running with a pretty strong reporter storyline this week, one that has her eventually find the path to Cicada’s home, with some aid from a colleague of Orlin’s, along with the drawing that Nora made after her trip into Grace’s mind. Iris doesn’t find much workable evidence at first, but she does eventually get cornered by Orlin, whereupon she pretends to interview him about lead poisoning cases, only to still come up empty. Orlin eventually deduces that Iris is lying regardless, and Iris just barely escapes Orlin attacking her, though in the process, she does discover that injuring Orlin with a knife drains his dark matter powers, which is what gives her the idea to try a new plan after Barry and Ralph come up empty with Goldface. This is easily the best solo storyline that Iris has had in a long time, and it would be great if Iris being in charge of her own newspaper means that she’ll get more tense brushes with big villains like this!

The remaining subplot surrounds Nora and Sherloque, with Sherloque becoming very close to deducing exactly who Nora has been sneaking off to see. Thawne presents a surprisingly novel suggestion for how to throw Sherloque off of Nora’s scent however, specifically to distract him with a certain woman named Renee Adler. Nora manipulates events so that Sherloque meets Renee at Jitters, but after Sherloque over-deduces and looks like a stalker, Nora has to try and seek the aid of several of Sherloque’s ex-wives to attempt to fix the situation… Only to discover that they’re all doppelgangers of Renee! The idea of Sherloque marrying the exact same woman several times on several different Earth’s is already hilarious on its own, but on top of that, it also provided a surprisingly smart explanation for how Thawne could possibly be aware that such a specific romance would distract Sherloque enough for him to forget about Nora’s agenda. Compounding the surprises here is that the Earth-1 Renee also happens to be a metahuman, which quickly motivates Sherloque to start thinking about ways to protect her from Cicada, another smart turn that takes Sherloque’s character in a great new direction. 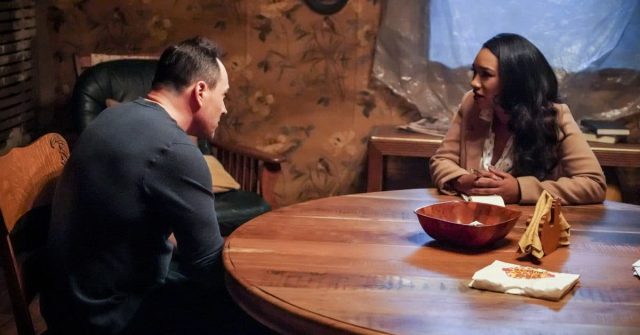 The rate that The Flash has been striking out over the past couple of seasons especially has become pretty alarming, but, “Goldfaced” finally returned the show to top form this week. We got to enjoy a great villain, along with two equally great subplots, and we’re overdue for a solid villain-of-the-week especially! I wish that Barry and Ralph went all the way with having to bend their principles in order to get what they want, and Ralph changing his mind about going through with the job because of some pictures of children does seem like a stretch, but outside of that minor quibble, The Flash surprisingly fired on all cylinders this week. The promise of a Goldface/Amunet team-up in the future is definitely something to look forward to (where has Amunet been this season anyway?), and Iris unintentionally discovering a new way to harm Cicada should hopefully inject some more worthwhile drama into that increasingly problematic storyline, since Cicada has either been far too unstoppable, or constantly escapes for contrived reasons. I really hope that The Flash stays strong next week, since this is the kind of momentum that Season Five has been starved for. Hopefully it’s not completely gone in the following episode.

The Flash 5.13: "Goldfaced" Review
The Flash finally delivered a truly superb episode for the first time in a while this week, as Barry and Ralph are forced to work with a villain to gain a new means of stopping Cicada.
THE GOOD STUFF
THE NOT-SO-GOOD STUFF
2019-02-09
90%Overall Score
Reader Rating: (0 Votes)
0%