Arrow has surprisingly managed to sustain itself quite well without a major over-arching villain in Season Seven so far, rebounding from the significantly more uneven sixth season that came before. It seemed however like that arch-villain-less approach was going to change this week with, “Star City Slayer”, which brings back an old Slabside acquaintance of Oliver’s, now fully embracing his serial killer mantle from DC Comics lore. At the same time, Oliver deals with the fallout from William’s surprising return to Star City, which comes with a shocking twist that will have Oliver questioning his abilities as a parent.

Like any especially great Arrow episode, “Star City Slayer” offers a strong core premise of action, but wraps it in a surprisingly heartfelt sense of drama that allows the show to balance feeling thrilling with being grounded. This is definitely one of those stronger episodes, one that nicely keeps up the especially strong momentum from last week’s standout 150th episode, and one that finally presents a payoff to Stanley escaping Slabside, after he very brutally murdered Brick on the way out. As any avid Green Arrow fan who has been keeping up with the character’s more recent DC Comics storylines could probably guess, Stanley is the one who has been leaving threatening notes for Team Arrow, and as I suspected, Rene and Diggle have also started getting their own notes, following on from Dinah and Laurel a couple of weeks ago.

Incorporating Stanley as a serial killer that has claimed quite a few victims between both Star City and Central City (is he called the, “Central City Slayer” over in The Flash’s territory?), is a novel idea that allows this episode to frame its latest threat in almost a horror movie-style context. Seeing most of Team Arrow, sans Oliver and Felicity, track Stanley through what appears to be an actual haunted house is both creepy and tense, and Dinah even ends up getting her throat slit for the effort! Dinah survives, naturally (the flash-forwards have already confirmed that), but her injury is believed to have some sort of permanent consequences. I imagine that Dinah’s Canary Cry might be disabled from here on out, since she doesn’t seem to be relying on it at all in the future, possibly indicating that Laurel may end up being the one and only Black Canary of the present now, if she ever decides to take up her late Earth-1 doppelganger’s mantle. Either way, it’s refreshing to see a villain-of-the-week for Arrow that nicely manages to stand apart once again, after Chimera also made a mostly strong impression during the previous episode.

Yes, disappointingly, the show throws Stanley right back into Slabside right at the end of this episode, which does feel like a missed opportunity to some degree. I suppose that Stanley could always break out again, but his biggest impression so far is using a paralytic to immobilize Oliver, Felicity and William during a family dinner, before recounting how he needs to, “Correct” bad influences in the Green Arrow’s life. This could have been a great storyline to spread across at least a minor season arc, but it seems like Arrow wants Ricardo Diaz and the Longbow Hunters to remain the current season’s biggest threats for the time being, along with possibly this ‘Dante’ character that A.R.G.U.S. is hunting. Even so, the scene where Stanley recounts his traumatic family backstory while threatening an immobile Felicity and William in front of Oliver was a great highlight moment this week, even if Stanley was ultimately neutralized very easily, once Diggle and Rene finally arrive. 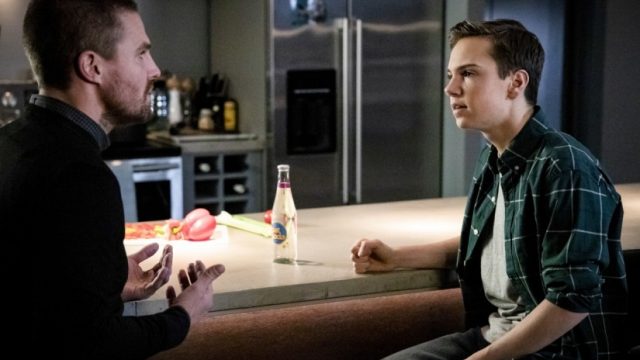 With such an interesting and intense active threat in Stanley this week, it’s surprising that Arrow also managed to juggle two major character exits in the same episode, even if one ended up being more satisfying than the other. With William returning home, and quickly becoming hostile towards Oliver and Felicity, things come to a head at the Queen household when William ends up calling his surviving grandparents to take him away, and they take him up on the offer. There’s some really well-performed dramatic scenes between Oliver and William here, and Felicity and William for that matter, but Oliver eventually deciding to do what’s best for William, namely letting him go to live in Central City so he can have a better chance at a normal existence (I guess he lives in the convenient part of town that’s not filled with metahumans?), was a strong moment of maturity for him as a father, and a hero to Star City. On the flip side however, Curtis also made an abrupt exit from the show this week, taking a job in Washington that he was offered out of nowhere. Sure, Curtis has been making a stink about A.R.G.U.S.’ methods lately, but his departure from the show feels very sudden and under-developed, so it’s tough to really feel all that much emotion about him leaving. I guess this may explain why Curtis hasn’t been around in the flash-forwards though.

Speaking of the flash-forwards, they were actually especially strong this week, which is great, since the show hasn’t been relying on them as much in 2019 so far. The flash-forwards this week involve William, Roy, Dinah and Zoe re-discovering the ruined bunker, which was also found by Blackstar and Connor Hawke at the same time, and sure enough, Blackstar and Connor Hawke end up subduing and binding the vigilantes. After a surprisingly good fight scene, where we learn that Blackstar can definitely hold her own in combat, the vigilantes are interrogated, and the truth eventually comes out to Blackstar that William is Oliver Queen’s son. This leads to a semi-surprising twist (though there certainly were clues), wherein Blackstar reveals herself as Mia Smoak, the future daughter of Felicity, who also confirms that Felicity faked her death (unsurprising), and is actually still quite active in the future Star City! Mia having her mother’s last name and not Oliver’s may appear to suggest that Oliver and Felicity end up divorcing at some point in the future, possibly over Felicity’s alleged extreme and criminal methods, though I suppose it’s also possible that Oliver’s bargain with The Monitor during the Arrowverse’s Elseworlds crossover event may have also had him signing his death warrant. 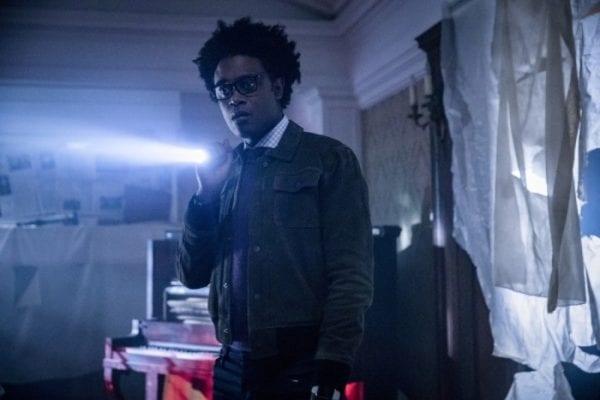 I still feel like Arrow needs to account for Legends of Tomorrow showing that Oliver is alive and still working as the Green Arrow in 2046, especially since that future does appear to account for Flashpoint, considering John Diggle Jr.’s/Connor Hawke’s existence, but at least the flash-forwards took a very exciting turn in this episode. The confirmation of Blackstar being Felicity’s daughter, and Felicity still being alive in the future, should give fans lots to think about while Arrow goes on hiatus for the rest of February, alongside Black Lightning, and both The Flash and Supergirl after their next episodes. “Star City Slayer” proved to be a very entertaining and exciting offering for Arrow all around, even if Stanley’s re-capture came pathetically easily, and even if Curtis’ exit was done without any true fanfare or buildup. I imagine that it’s back to Diaz and the Longbow Hunters once Arrow returns with new episodes in March, but it seems like Arrow is still going quite strong this season, even without needing an overall villain to be masterminding everything. I hope this isn’t the last we see of Stanley as the Star City Slayer, but I’m still quite happy that dramatic storytelling and thrilling bursts of action are still remaining the key focus overall during Arrow’s latest season.