Freeland’s metahuman problem seems set to multiply in a big way on this week’s episode of Black Lightning. Predictably, this meant that most of the ongoing drama surrounded the struggle over powered people in the city, though some of the Pierce family’s emotional issues still find found their way into a few subplots. “The Book of Secrets: Chapter Three: Pillar of Fire” does focus the storytelling a bit more compared to the past couple of weeks however, and makes for an especially solid offering. The tightening story focus is likely because the season is gearing up for a climax in March, after Black Lightning goes off the air for the remainder of February, but regardless, there was plenty of excitement to be had this week, even if it’s easy to get the sense that the entire ‘Book of Secrets’ story pod simply exists to be a lead-in to the climactic story arc of Season Two.

With the ASA now determined to move the pod kids to a different location, after Markovia’s agents zero in on their location, Lynn is left to try and deal with the risky move, while also racing against the clock to make sure that no issues are had with the pod kids all the while. Lynn eventually agrees to move the pods against her wishes, on the condition that Dr. Jace be kept away from her, though ironically, the movement of the pods ends up triggering another threat. This threat comes from Tobias and Cutter, who are alerted from their own pod system that the other pods are being moved, forcing Tobias to accelerate his timeline when it comes to acquiring more metahumans to sell. Since Dr. Jace left only one awakening syringe for the MOD pods, Tobias decides to choose one of the Masters of Disaster at random to accompany Cutter and help secure the other pods.

Finally, we get to see the Masters of Disaster in action this week, at least somewhat. Since Tobias can only awaken one of the MOD metahumans, we only get Shakedown, the earth-themed Master of Disaster from DC Comics lore, activated for now. Wendy Hernandez, who appears to be the Black Lightning universe’s version of DC Comics’ fifth MOD member, Windfall, also gets re-awakened by Lynn in this episode, consequently, possibly giving the Pierce family at least a slight edge against the new threat that they find themselves up against. Cutter and Shakedown naturally lay waste to a huge chunk of the ASA and successfully secure the pods, despite Lynn managing to escape with Wendy, and this leaves Tobias primed to become the world’s top metahuman dealer for the show’s next story arc. Since there appear to only be a few episodes left in Black Lightning’s second season, this leaves the show’s arch-villain in a great position, and should give him all of the super-powered muscle he’ll ever need to take on Black Lightning and friends over the rest of the season!

Despite Jefferson being about to face a big problem as Black Lightning, he also ended up getting a surprising opportunity as a civilian this week, when the video captured from Lowry’s outburst at Jennifer over Khalil’s memorial ends up going viral. With the school board no longer being confident in Lowry’s ability to lead the school, Jefferson now has a chance to get his old job back! This is initially exciting, but as you can imagine, Jefferson’s not going to make it easy on himself. When he’s called to testify against Lowry, Jefferson actually ends up defending Lowry, enraging Napier, who set up Jefferson’s opportunity to reclaim his principal position for him, and leaving Napier refusing to do another favour for Jefferson. This might have meant something if there was more development to the Jefferson/Lowry relationship, but unfortunately, the show has barely focused on Lowry’s character this season, so Jefferson’s defending of him just feels forced and hollow. It just feels like the show is too transparently keeping Jefferson down for the rest of this season, since he can’t realistically be principal of Garfield High while also doubling down on his efforts to stop Tobias as Black Lightning. To the show’s credit, it does at least point this out too. I just wish that Jefferson defending Lowry actually made some degree of sense.

Both of the Pierce sisters also spearheaded their own subplots this week, with Anissa desperate to track down the runaway Grace, while Jennifer is equally desperate to start squeezing the gang lieutenants of The 100 for any potential information on how to get to Tobias. Jennifer suddenly mastering her powers to the point where she can quickly and easily shock and throw around the members of The 100, particularly after overloading a containment chamber right from the start of this very episode, feels a little head-scratching, since it doesn’t really follow that Jennifer suddenly has sublime control of her abilities, after being so openly unstable with her metahuman powers throughout the show so far. Jennifer does crash when she hits a dead end though, forcing Anissa to just barely save her from being shot dead, and carry her back to Gambi’s base, where Perenna then scoops her up to help her deal with her rage. I’m actually kind of amazed that Perenna didn’t point out that Jennifer clearly seems to be doing fine controlling her abilities here, but regardless, it probably would have made more sense if the real problem with Jennifer was that she was far too deadly to relatively innocent members of The 100, rather than randomly passing out so that Anissa could bail her out.

When she’s not saving Jennifer from certain death, Anissa instead spends this episode trying to get Gambi to help her track down Grace, who has now completely disappeared. Jennifer suggests that Grace may simply have fled because her relationship with Anissa was too serious, but it turns out that Grace’s backstory runs much deeper than previously indicated. As you can imagine, the backstory that Gambi eventually unearths from Grace’s past is considerably different from Grace’s backstory in DC Comics lore, where she’s descended from the Amazons of Wonder Woman fame. In the Black Lightning universe, Grace Choi isn’t even Grace Choi at all, but was actually born Shaylee Wilde, a foster brat that was eventually abducted and sold into child prostitution, before she escaped and eventually changed her name to ‘Grace Choi’, upon arriving in Freeland. I imagine that this sex trafficking story is probably related to how Grace got her powers, and I’m really happy that the show finally found a more intriguing and dramatic story development to chew on with Grace at last, after it spent so much time spinning its wheels with the same tired relationship drama between Grace and Anissa. Grace is still MIA for now, but at least Anissa is determined to find her, and they’ll finally have more to talk about beyond how dodgy Grace is during hangouts. 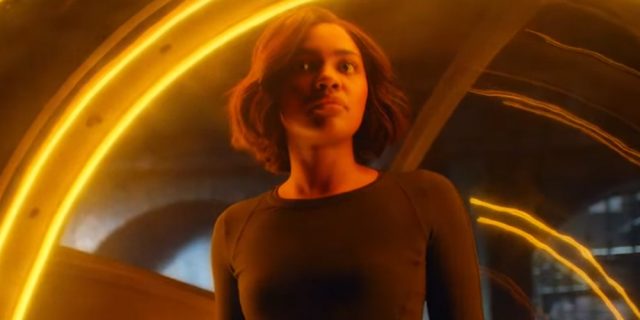 Black Lightning is pretty much staying on the same gear for the latest addition to the ‘Book of Secrets’ story pod, which is to say that it’s having to cover a lot of ground very quickly, but is at least doing so in an entertaining fashion. The formerly disjointed storytelling of the previous two episodes was mostly fixed this week, thankfully, even if Jefferson’s inexplicable Lowry defense feels haphazardly tossed in, especially when Jefferson defending Lowry at all is pretty confusing at this point. Regardless, our first real taste of the Masters of Disaster, if we’re not counting Wendy’s former appearance on the show (she’s not affiliated with the MOD metahumans in the Black Lightning universe), was pretty fun, and Tobias’ deadly new inventory of metahumans finally makes him feel even more dangerous than before! Tobias also happens to celebrate his new business venture by rather unceremoniously killing off Todd, sending him off with a car that later explodes at a traffic stop. I guess it’s true that Tobias doesn’t really need Todd anymore too, now that he’s fully recruited Dr. Jace. Hope the payout was worth it, kid. Regardless, with Black Lightning now taking the rest of February off, we’ll have plenty of time to stew on just how Black Lightning and the other heroes are going to be able to stop Tobias now, considering that he’s probably about to get plenty of sinister metahuman purchase offers from Markovia alone!

Black Lightning 2.13: "The Book of Secrets: Chapter Three: Pillar of Fire" Review
Black Lightning continues increasing the excitement to solid effect this week, as one of the Masters of Disaster is awakened, and Jefferson gets a chance to reclaim his old post at Garfield High.
THE GOOD STUFF
THE NOT-SO-GOOD STUFF
2019-02-14
83%Overall Score
Reader Rating: (0 Votes)
0%