After last week’s story shift to Hilltop, The Walking Dead predictably stayed on that route for this week’s following episode. “Omega” finished laying the foundation for the Whisperers, the next major threat to the series’ lead survivors, namely by establishing the backstory of Lydia, along with her mother, Alpha. Meanwhile, the new group of Hilltop survivors decide to start looking for the missing Luke and Alden, who were captured by Alpha and her crew at the end of last week’s midseason premiere.

Lydia already seemed like a pretty promising character last week, but she really came into her own in this episode. Through both her talks with Henry, and her interrogations by Daryl, Lydia starts opening up, via a series of flashbacks, about her time during the early days of the walker apocalypse, when she was just a young girl. It’s here that we also get a convenient look at the backstory of Alpha, before she was Alpha, and before the Whisperers ever existed. Apparently, Lydia and her parents were holed up in a shelter along with several other people during the first days of the walker apocalypse, with Lydia’s father being resigned and believing that the world is over, so he can do what he wants now. Alpha however wants to look out for her family, as well as the other people in the shelter, believing that everything will eventually get better. This initially seems like an expected, if tragic backstory for Lydia’s character and her origins. 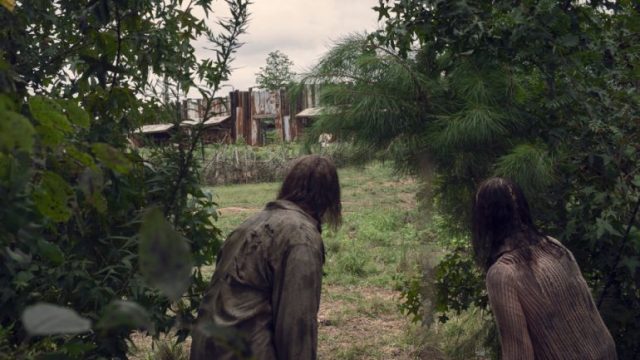 Surprisingly though, the show ends up throwing in a pretty solid curveball, once Henry begins encouraging Lydia to open up from the adjacent cell. Henry even allows Lydia to go outside and wander around Hilltop, to prove that strong survivor colonies can still exist, which nearly gets him bludgeoned with a hammer. Yeah, Henry’s really racking up a lot of stupid moves, considering that he’s now supposed to be a lot smarter and more mature. As much as letting Lydia out was a really dumb idea by Henry however, it did allow for her to hear the cries of the baby Hershel, leading to her realizing that several of her memories may be suspect, and that Alpha may have lied about her childhood experiences in the shelter. Upon a subsequent interrogation by Daryl, Lydia realizes that her mother was always the brutal one that embraced the apocalypse, while her father was the one trying to protect her, until Alpha killed him, despite telling Lydia that a walker was responsible for her father’s death. This revelation is made to occur fairly quickly, since there are only so many episodes in a Walking Dead season, but this realization by Lydia nonetheless proved to be a smart way to lean into the complex psychology of the Whisperers, who definitely seem twisted, but don’t seem truly evil at this point. It’s not like a cut-and-dried Saviors situation at all anymore.

Another intriguing element to the episode is the question of whether Lydia should be punished for being a clear victim of domestic abuse, even if it was post-apocalyptic. Once Daryl discovers that Alpha has been beating Lydia with a birch snap, he also ends up being thrown for a loop, recounting from experience that he knows about the psychology of abusers, and how they only seek power. Henry later ends up confronting Daryl about the implication that he was also abused as a child, in that case by his father, and the show actually ended up handling this peek into Daryl’s backstory pretty well. Daryl doesn’t bluntly admit to anything, which is true to character, and Henry responds by telling him another fact about Carol; She originally kept her hair short because Ed used to grab it when he beat her, so eventually she cut it off. This effectively explains why Carol now has long hair, since she’s finally settled into a better, healthier marriage with Ezekiel, and also helps to continue building a father figure-style bond between Daryl and Henry. I hope that this becomes another way to continue developing Daryl as a would-be leader to Hilltop, since it seems like, despite his resistance, he really is the best thing for the colony right now, and especially for Henry, as Henry continues to struggle with his transition into adulthood, despite wanting to do good.

Outside of the solid core story material with Lydia, Daryl and Henry this week, we were saddled with a considerably less effective subplot surrounding the new survivors and Tara. Now that Tara is starting to more seriously take on leadership duties at Hilltop, she agrees to help look for Luke and Alden with Magna, Yumiko, Kelly and Connie, only to later decide that it’s not a good idea, and the survivors should wait until they have a better plan. This eventually compels most of the women to want to defy Tara and go looking for Luke on their own, with only Magna initially resisting, before eventually giving in. Considering that this new group of survivors was only just now welcomed into Hilltop, this could have been a great chance to have them already start pushing their place, but perhaps also earning the community’s respect through the process of bringing home Luke and Alden.

Sadly, that’s not how things panned out. Instead, the four women simply venture out at night, and eventually decide that it’s too scary after a few walkers come around. Yes, this group of survivors, one that has somehow gotten by on their own for years, suddenly can’t because they can’t find Luke, and run scared back to Hilltop, or at least partially. This really wasn’t the best way to make the new survivors any more impressive, especially when this storyline just completely fails to move forward here. Moreover, when Tara finds out that the new survivors snuck out to look for Luke, she simply shrugs and gives them a slap on the wrist, which doesn’t feel like much of a payoff. If the show was going to entertain this idea of both challenging Tara’s leadership, while also challenging how the new survivors will fit in at Hilltop (as it’s more effectively done with Henry), it really should have gone all the way with it. Maybe there’s more time for tension with Tara later, but at this point, it feels like the whole angle of looking for Luke against Tara’s orders was just as forced and pointless as Luke being captured in the first place.

The episode at least excitingly ends with Alpha and the Whisperers finally showing up at Hilltop’s doorstep however, saying that they’re only there for Lydia. I imagine that they’ll potentially trade Luke and Alden for Lydia’s safety, but knowing how complex the Whisperers can get, it definitely won’t be that simple in execution. At this point, I’m definitely enjoying how well the show is building up the Whisperers as sick and twisted, but also difficult to paint as run-of-the-mill villains. “Omega” proves that the Whisperers can easily stand as an especially intriguing way to challenge the show’s usual survivor dogma and psychology, in a manner that even the Saviors didn’t ultimately deliver to the same extent. The Saviors were all about power to their group of survivors, but the Whisperers are more about adapting to a world that seems to no longer want conventional human identity in it. As Lydia points out, Alpha basically feels that it’s the walkers’ world, and the remnants of humanity are just living in it now. This doesn’t change the fact that Luke’s and Alden’s capture has still amounted to nothing so far, but when all eyes are on the Whisperers, The Walking Dead has so far been crushing it. Here’s hoping that it can see through the current momentum of these very effective new antagonists for the rest of this season!

The Walking Dead 9.10: "Omega" Review
The Walking Dead dove deep into the origins and psychology of the Whisperers this week, continuing to effectively build them up as twisted, morally complex antagonists.
THE GOOD STUFF
THE NOT-SO-GOOD STUFF
2019-02-17
83%Overall Score
Reader Rating: (0 Votes)
0%