Supergirl has taken the past couple of weeks off, presumably to polish up its increasingly problematic scripts, but it did make a brief return this week, on account of a Valentine’s Day-themed episode. “Menagerie” marked the occasion by introducing the titular DC villainess to the show, while also finally unleashing Nia as Dreamer… Sort of. Most of the time, the episode was instead about emotional angst and Valentine’s Day-themed bellyaching on Kara’s and Alex’s end, which, needless to say, feels like a waste of a potentially good Menagerie storyline, especially when Menagerie herself doesn’t make quite the impression that she could have in this incarnation.

With Kara upset over being unable to work with Alex at the DEO, a visit to J’onn gives her the idea to work with Alex in the context of Kara Danvers, the CatCo reporter, rather than Supergirl, National City’s resident superhero. Since J’onn is also doing quite well with the opening of his private detective agency, the two team up to locate the missing minister of alien affairs, only to find him murdered alongside the diamond broker that he was having an affair with. Both of the victims’ hearts were also devoured, suggesting definite hostile alien activity, and providing a convenient excuse for Kara and Alex to team up and work together. This is a fair enough idea, even if it seems like the episode gets bored and abandons it very quickly, since Alex inevitably splits off and does her own thing again, after Menagerie gets away the first time, with no Supergirl intervention. Good job backing yourself into that corner, Kara! 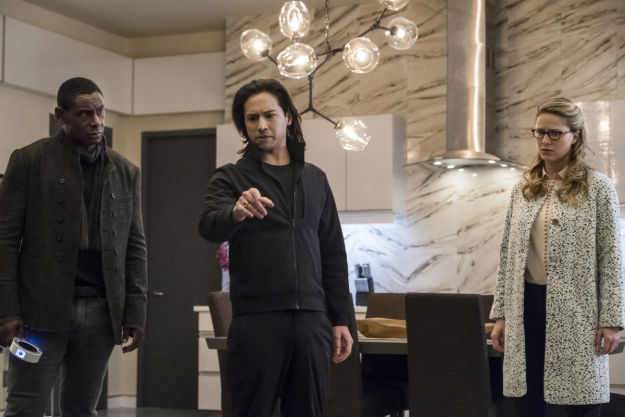 The murders come courtesy of Menagerie, of course, who, as in DC Comics lore, is a symbiotic alien serpent that bonds to a jewel thief named Pamela Ferrer, Venom-style, and feeds on human hearts, providing a convenient means for Pamela to be paid in precious jewels after feeding her new friend. This is a very cool idea for a Supergirl villain, taking the foundation of a character from DC Comics lore, and giving her an M.O. that fits the style of the show, and would logically draw the attention of both the DEO and Supergirl. Except, Kara doesn’t even bother suiting up as Supergirl until the climax of the episode, since she’s trying so hard to work with Alex. This is disappointing, since all Menagerie is left to do in that case is kill a few people, eat a few hearts, and smack around some of the Children of Liberty. Yes, they’re back again.

To be fair, the Children of Liberty element behind this episode’s storyline is probably the best element of Supergirl’s narrative this week, especially since we aren’t seeing them pop up randomly in a place that they’re not logically supposed to be, like in the previous episode. With increased pressure to free Ben Lockwood, the former Agent Liberty, from prison, Ben’s son, George decides to take matters into his own hands when Menagerie strikes, rallying the Children of Liberty members to hunt down and kill the murderous alien. This is a promising idea, since both Supergirl and Alex struggle to stop Menagerie, and it’s George who ends up dealing the supposed deathblow against the symbiotic alien after the climax, allowing the public to celebrate that the Children of Liberty supposedly finished the job that Supergirl in particular could not. This, timed with President Baker finding a legal loophole that allows Agent Liberty to be released from prison, gives the Children of Liberty a big wave of renewed public adoration, while in turn increasing scrutiny on Supergirl. As much as Menagerie barely contributes to any excitement on Supergirl so far, this regrouping of the Children of Liberty was solid and smartly executed, and I can’t say I’m complaining about Agent Liberty finally being released from jail, since it seems like the show doesn’t know how to shift this season’s focus away from him very effectively.

Like I said though, the other big hook this week was Nia finally suiting up and fully embracing her fledgling superhero mantle as Dreamer, which would have been cool, if the show didn’t once again botch it. It’s frustrating that Nia continues to be such a big Achilles’ heel for Supergirl’s current season, because TV’s first transgender superhero should be a very big deal, and yet, the show just keeps forcing crappy, half-baked storylines on Nia’s character. Nia spends most of the episode brooding over her recently deceased mother, which is understandable, as is her continuing to resist training from Brainy. This amounts to nothing in the end however, since, after a bunch of filler at Nia’s roommate’s Valentine’s Day party, which seems to be setting up a potential new love interest for Alex and nothing else (we’ll see if that sticks), Nia just arbitrarily decides to wear her costume, smack Menagerie once, and then do nothing else. Kara celebrating Nia being a superhero is a joke here, because this is the textbook definition of a participation ribbon. Nia herself even admits that she’s still not wielding her powers properly, and is basically a liability in the field at this point. At least she finally agrees to let Brainy train her at the end of the episode though. Hopefully that helps to make her an actual worthy superhero when the show resumes in March.

The remaining subplot once again centers around James and Lena, who spontaneously decide to go to Paris for a romantic getaway over Valentine’s weekend. Right before they leave however, Lena is approached by Haley, who offers Lena a government contract to help apply her research to enhancing the U.S. military. Lena deliberates over the decision, but when she voices it to James, James says that he vehemently disagrees with it, and their relationship implodes. Yep, despite James resolving to trust Lena’s judgment, and even admitting that he did this in the very same scene, James decides that he and Lena have to break up, because somehow James has the authority to tell Lena what to do with her scientific achievements, in a supposedly female-empowering show. Uuuggghhh! Not only is this a very stupid reason to break up James and Lena, especially since couples have political differences all the time in the real world, and frequently stay together through it just fine, but it also frustratingly regresses James’ character back to being a bleeding heart, holier-than-thou dipshit. Moreover, James’ stance feels hypocritical as hell, because he clearly took it upon himself to become Guardian, yet somehow thinks that actual brave men and women in the armed forces don’t deserve a greater means to fight for their country?! I get the fear over abuse of Lena’s research, but that’s a ‘what if?’ scenario that’s not really Lena’s problem, especially when her findings would no doubt help far more people than they could potentially hurt! 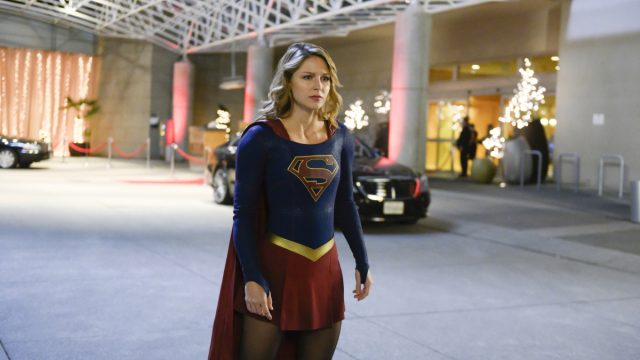 Supergirl still seems to be stuck taking one step forward and three steps back this week, but I suppose it will get the same mini-hiatus that Arrow, The Flash and Black Lightning started on last week, taking the rest of February off, before returning for new episodes at the start of March. As with the past several weeks that Supergirl already spent off the air earlier this month, I hope that this time is used to tighten up the show’s storylines, because Season Four is really in a bad way at this point. “Menagerie” was at least a clear improvement over the awful, “Blood Memory”, the show’s previous sorry offering from the end of January, but it’s still a very middling episode that fails to make the most of its titular villain. The Children of Liberty winning more support in National City through their supposed ‘defeat’ of Menagerie (even if Pamela Ferrer is taken to prison with Menagerie regenerating in her soon afterward), is a smart turn, and I wouldn’t have been so annoyed with James challenging Lena on her new government contract, if he didn’t needlessly and callously break up with her over a political disagreement. As I’ve said before however, the show really needs to improve its Nia storylines most of all, and there hasn’t been much worthwhile storytelling gained from Alex’s mind-wipe either. At least Manchester Black seemingly breaking out of prison to recruit Menagerie for his own Children of Liberty-hunting squad presents promise for Supergirl’s return in March, especially since this effectively allows Menagerie the chance for a more impactful do-over in the next episode.