Despite a series of high-profile failures, controversial writer-director, M. Night Shyamalan finally appeared to be on the right track again in 2017, when he delivered Split, far and away one of the year’s best dark horse hit movies. Not only was Split a twisted and terrific psychological thriller on its own merits, but it also concluded with quite the stunning surprise; A cameo from Bruce Willis’ Unbreakable protagonist, David Dunn! Shyamalan had been discussing the desire to make a sequel to his 2000 sophomore hit for quite some time, but no one would have suspected that Split was that movie, operating as a disguised follow-up that cemented itself as part of a shared Unbreakable universe! Shyamalan’s next promised trick would then be greater still; He would combine the protagonists of both Unbreakable and Split into a single climactic film in 2019!

This film is Glass, a movie named for Samuel L. Jackson’s ruthless Unbreakable mastermind, Mr. Glass. A predictable hit at the box office, Glass was nonetheless panned by critics, who cited it as an over-ambitious and ultimately pointless experiment, which failed to expand upon the visions of either Unbreakable or Split to any meaningful degree. I was late catching Glass on the big screen myself, but as a supposed examination of what we’ve come to celebrate in superhero fiction and how it relates to our desire to be greater in the real world, I can appreciate the movie for what it was ultimately trying to do. I must also agree however that Glass doesn’t really do enough to justify its existence, coming off as a gimmick when it should be a bold exercise in creativity and surprise.

Almost all of the surviving leads from Unbreakable and Split make a return in Glass, and this obviously includes Bruce Willis’ indestructible clairvoyant, David Dunn, Samuel L. Jackson’s criminal mastermind, Elijah Price/Mr. Glass, and James McAvoy’s Kevin Wendell Crumb/The Horde. Several supporting cast members from the former movies also return, such as Spencer Treat Clark as David’s son, Joseph, and Charlayne Woodard as Elijah’s mother, Mrs. Price, both from Unbreakable, as well as Split’s Casey Cooke, played by Anya Taylor-Joy. The main new addition in the cast of Glass is Sarah Paulson’s Dr. Ellie Staple, a kindly therapist who specializes in curing delusions within people that believe they are real-life superheroes.

This is a very cool idea for a union between Unbreakable and Split, two Shyamalan movies that tried to provide a starkly grounded spin on unexplained and seemingly supernatural people. Seeing Dr. Staple undress and re-examine the seemingly unquestionably unnatural events from both of Shyamalan’s preceding movies is a neat device, especially when it allows the appealing leads of Unbreakable and Split to interact within a common setting. The problem with this hook however is that the inevitable Shyamalan twist is insultingly obvious right from the get-go, especially given how impossible it is to truly question the events of Unbreakable in particular. The movie does a much better job of undressing Split, but Unbreakable really backs it into a corner, because there’s just no logical way to justify David Dunn being indestructible and psychic in any real-world context, as Unbreakable very definitively proved.

The presence of characters like Joseph Dunn, Mrs. Price and Casey Cooke also barely ends up mattering in the grand scheme of things to boot. Maybe this is meant to be a play on the powered versus the powerless, but all it ends up doing is creating the impression that almost the entire supporting cast is completely wasted. They’re all just left to gawk at what audiences obviously came to see; David Dunn and The Horde squaring off, while Mr. Glass conspires in the background. You do get that, but not nearly enough of it to make Glass feel like a fully satisfying experience, since so much of it amounts to talking and pretense about a genre of fiction that many people have already gone to great lengths to analyze and deconstruct. The fact that Glass ends up having far less to say than many of those prior voices just makes it the disappointing whimper that results from two great ingredients that you’d think would make an explosive concoction together.

Glass is a movie that so badly wants to be a climactic crescendo to two of Shyamalan’s best movies, but when it gets so bogged down in inane dialogue and wheel-spinning, it’s tough to look at it is anything other than a gimmick. There’s not enough clashes and awe to make it truly feel like a superhero blockbuster, and there’s not enough clever character work or intelligent writing to make it truly succeed as a psychological thriller either. Some of the turns with Mr. Glass himself are at least solid, making one wonder why he wasn’t allowed to just be the one and only mastermind behind events, but the fact that he spends the entire movie stuck in a mental institution pretty much leaves him with one hand tied behind his back, in what’s supposed to be his own movie, if the title is any indication! 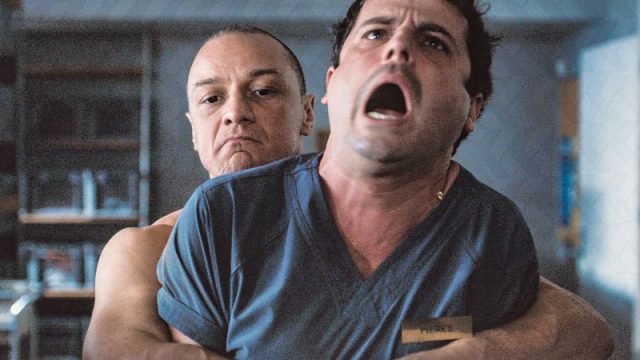 Again, the ending of Unbreakable, which saw Mr. Glass arrested and institutionalized, seems to back Glass into a storytelling corner, since it now has to try and justify how Mr. Glass could possibly still be a threat. It doesn’t really manage to succeed either, since the entire movie is predicated on the random happenstance of David Dunn and Kevin Wendell Crumb both ending up in the same institution as Mr. Glass, somehow. When you pair that with the big, obvious twist at the end, it will just leave you scratching your head as to why anyone would have thought it was a good idea to put these three characters in the same setting, let alone when the ultimate antagonist’s agenda is truly revealed! This unity of Unbreakable and Split personalities simply feels like it’s being done for its own sake, a promising story idea to be sure, but a story idea that Shyamalan just can’t seem to effectively build on, outside of the initial concept.

As much as Shyamalan has made quite a few stinkers in recent years, it’s tough to deny that the man does have an eye for psychological tension, when he actually has the right story to work with. Some of Shyamalan’s directing really does manage to shine in a few of Glass’s better scenes as well, which truly do feel psychologically intense and morally ambiguous in a great way. The much-publicized therapy session shared between David Dunn, Mr. Glass and The Horde is arguably the highlight of the direction in many respects, providing a shaky atmosphere of doubt and dread that almost makes the audience wonder if they saw what they thought they saw in the previous movies, even considering that Unbreakable is nigh on impossible to dispute. It’s moments like this that make you wish that Glass was able to spend more time in the cooker, because not every idea in it is a bad one.

That’s really the most tragic element to how Shyamalan puts Glass together; It’s not full of bad ideas, just under-developed ones. Compounding this problem is Shyamalan’s usual over-emphasis on slow, methodical dialogue, which worked plenty well throughout much of Unbreakable and Split, but obviously doesn’t fly in what’s supposed to essentially be the ‘Avengers’ of supernatural thrillers. What could have been an exciting, intense and powerful challenge to the audience instead becomes a self-important, faux-preachy slog that feels content with its own premise, yet never desires to truly expand upon that premise. It just feels like Shyamalan was forced to work with a first draft and a first set of storyboards here, sadly leaving Glass chock full of unrealized potential.

It’s clear that Shyamalan let Universal know from the jump while pitching Split that it was going to be a surprise sequel to Unbreakable. Universal was clearly in love with this idea too, since they wasted no time securing the Unbreakable character rights from Disney (who own Unbreakable distributors, Buena Vista and Touchstone), and when Split ended up becoming a big critical and commercial hit during its wide public release in 2017, Universal obviously fast-tracked Glass as quickly as possible, giving Shyamalan a two-year deadline before the movie had to be in theatres. The thing is, when Shyamalan is at the mercy of a studio’s schedule, he just doesn’t work very efficiently, and if 2010’s disastrous live-action adaptation of The Last Airbender didn’t prove that, then Glass certainly will. Unlike The Last Airbender as well, Glass is centered around Shyamalan’s own properties and brainchildren, the union between two movies that clearly functioned better apart than they do together.

I guess in that respect, Glass is more akin to Shyamalan’s version of The Defenders, rather than The Avengers, if you will. To be more specific, it does successfully unite the characters that it wishes to unite, but it never truly feels like it’s all that necessary to unite the characters in the first place. Glass stands as a way to excite fans of Unbreakable and/or Split, but beyond that, it just feels like Shyamalan is writing a cheque with his mouth that his ass can’t cash. I don’t entirely blame him for that, because Glass was very clearly rushed with an unreasonable deadline, being treated like am assembly line blockbuster when it clearly wasn’t meant to be, and like Unbreakable and Split both very clearly weren’t. This easy sympathy for studio intervention doesn’t change however that Glass is unfortunately a huge disappointment. It’s certainly not a disaster, and it does have its moments of inspiration and twisted charm, but Glass barely hovers above middling fan-fiction, and that’s just strange coming from the same writer-director that pioneered these personalities in much better separate stories already.

Glass Review
Glass is an unfortunate disappointment that doesn't manage to compare to the appeal of Unbreakable or Split before it, ultimately having far less to contribute to the superhero deconstruction discussion than it thinks.
CHARACTERS60%
PLOT55%
DIRECTION60%
THE GOOD STUFF
THE NOT-SO-GOOD STUFF
2019-02-19
58%Overall Score
Reader Rating: (0 Votes)
0%