The grand finale to Jeremiah’s villainous origin story came to fruition on Gotham this week, bringing together the show’s own take on a Batman: The Killing Joke-esque storyline, while a subplot with Penguin, Selina and Barbara filled in the gaps. “Ace Chemicals” begins as another throwback offering for Gotham however, having Gordon and the GCPD discover a bizarre murder scene that relates to a future Batman villain, in this case finding several men with Zorro-esque “Z” carvings across their chests. If you’re familiar with most Batman origin tales, you can probably see where this strange crime is going well before the show gets there.

Yes, in true Batman: The Killing Joke fashion, it’s time for, “One bad day” to tie together the key origin points of both the future Batman and his future arch-nemesis. It seems like the show is finally ditching the pretense of making Jeremiah Valeska another Jerome-esque Joker forerunner, which is good, because that was starting to feel both tiresome and unnecessary. By the end of the episode, it’s abundantly clear that Jeremiah is going to be the Joker of the Gotham universe, and you know what, that suits me just fine, especially considering that this is Gotham’s last ever handful of episodes. What’s more problematic is that Jeremiah’s actual transformation into The Joker ends with a disappointing whimper here, despite a fairly exciting lead-up that manages to at least partially justify how this take on The Joker can become an arch-nemesis to Batman, not just in scope, but also in psychology. 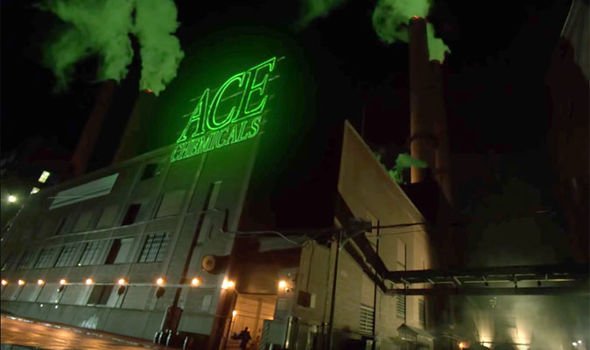 After Gordon discovers the mysterious and grisly murder scene at the start, revealed to be test victims for a poisonous gas that Jeremiah and Ecco are developing, Bruce ends up following Jeremiah’s tunnel to Wayne Manor, where he discovers a hypnotized Alfred, and a kidnapped couple that were forcibly given plastic surgery to resemble Bruce’s dead parents. Jeremiah’s entire plan with the tunnel was to set up an ornate scenario wherein he could insert himself into the most influential day of Bruce’s life; The day his parents were murdered in Crime Alley. When Bruce inevitably rejects this idea, Jeremiah decides that if the two can’t be bonded as friends, they can instead be bonded as enemies, which will nonetheless permanently entwine the two young men in a perpetual cycle of violence and psychological challenges.

Jervis Tetch, the Mad Hatter himself, even manages to make a return in this episode (and more heavily resembling his DC Comics inspiration this time!), just in time to be present when Gordon and Lee end up snooping around, only to get captured and bound at the Ace Chemical plant by Ecco. The turn where Jeremiah changes his plan to simply kill the fake Thomas and Martha off-screen, and have Tetch hypnotize Gordon and Lee to pose as Thomas and Martha Wayne in the alley instead, is pretty awesome, and genuinely backed Bruce into a corner pretty well. This also gave Selina a convenient opportunity to redeem her former actions in Crime Alley, as her bullwhip prevents Gordon and Lee from being shot dead, while the pearls that would remove the hypnosis are dropped to snap Gordon and Lee out of their trance. This leads into the expected Bruce/Jeremiah duel at Ace Chemical, with Gordon taking the chemical weapons that Jeremiah planned to fire around the city, and trying to dispose of them in the river. Because Jeremiah, for some confusing reason, put a timer on his chemical weapons, which seems both stupid and pointless, and completely set him up to have his scheme thwarted. I thought Jeremiah was supposed to be far more intelligent than Jerome? 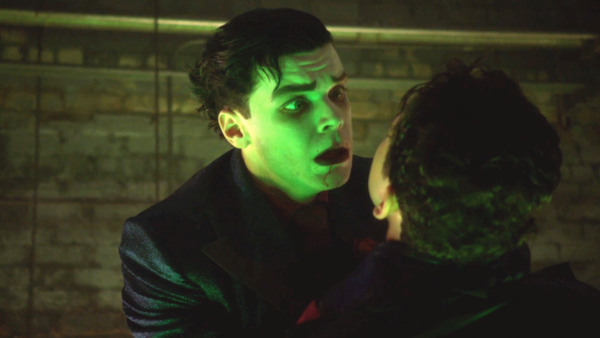 Regardless, there is a brief scuffle between Bruce and Jeremiah at Ace Chemical afterwards, one that even has quite a lot of standout dialogue and performances delivered between David Mazouz and Cameron Monaghan, making the drama at the very least seem genuinely epic. This sequence of course ends with Jeremiah stupidly fumbling a punch and tumbling into a nearby chemical vat though, which somewhat ruins the scene, because the way this goes down ends up looking stupid and anti-climactic, even if the fall into the chemical vat at Ace Chemical does mirror most Joker origin stories from DC Comics lore, most notably the ‘official’ one from Batman: The Killing Joke. Jeremiah also inexplicably survives being fully submersed in toxic chemicals for God knows how long, because DC Universe, I guess (he should have definitely drowned twenty times over, at the very least. Did Ecco or Tetch somehow pull him out and leave him?), and is left brain-dead and disfigured at the hospital, with Bruce and Selina left to claim that he’s no longer a threat to them, or to Gotham City. Obviously, Batman/DC fans know that they’re going to eat those words, once Jeremiah eventually and inevitably awakens as the fully christened Joker of the Gotham universe. I’m not sure if we’ll even get to see this happen in the end though, since Gotham doesn’t seem to be allowed to portray Batman or The Joker in earnest, if most of the showrunners’ comments are anything to go by.

The rest of the episode was rounded off by a subplot that continued building on Penguin’s supposed plan to escape Gotham City, but this was more or less a complete waste of time. It turns out that Penguin doesn’t actually have a real plan, and is simply sending out guinea pigs to get blown up in boats along the river, since the government apparently somehow mined most of the water that separates Gotham City from the mainland. Yeah, even by the standards of DC, I definitely have to call bullshit on this, since that’s both way too expensive and way too impractical to implement in any capacity, and feels like a half-hearted attempt to address an obvious plot hole with this final Gotham season’s overall premise. Whatever the case, the final result is that Selina betrays Penguin, maybe (her allegiances are vague here, even by future Catwoman standards), then Penguin seeks help from Nygma, then they go to Barbara, then Barbara inexplicably can’t kill Penguin because of her unborn child. Again, I call bullshit on this, since Barbara would never hesitate to kill Penguin by this point, pregnancy or no! Couldn’t Penguin have just said that Barbara needs him, or at least his resources, to escape Gotham City? That would have at least partially justified why Barbara couldn’t just shoot him on the spot, beyond the obvious fact that Penguin has to survive Gotham’s events so that he can menace Batman in the near future.

“Ace Chemicals” disappointingly ended up feeling a lot more like a filler episode for Gotham than it probably should have, even if it does provide some genuinely strong dramatic moments for Jeremiah’s final transformation into The Joker. The whole, “One bad day” homage idea doesn’t feel executed to its full potential here, but it has its moments, and did at least bring Jeremiah’s twisted obsession with being connected to Bruce toward its predictably violent, superhero career-defining conclusion. The whole subplot with Penguin, and now Nygma, Selina and Barbara, all trying to escape Gotham City still feels like a total waste of time however, since these characters are obviously still in the city once Batman begins patrolling it. Hell, the flash-forward at the very start of this season already proves that Penguin and Nygma at least ultimately won’t make it out of the city before the big final showdown, so what’s the point of any of this?! Like I said, Gotham pretty much just had to take a quick break from Walker and Dorrance so that it could wrap up the obligatory Joker origin here, and I guess that’s fine, but considering the fact that The Joker is arguably one of the greatest pop culture super-villains of all time, he really deserved a better, more expansive storyline across more episodes than Gotham was ultimately approved for in its last season. With a river full of chemicals once again delaying Gotham City’s re-unification with the mainland though, Jeremiah will no doubt still find ways to cause trouble for the show’s heroes, even when he’s currently a vegetable.

Gotham 5.7: "Ace Chemicals" Review
Jeremiah Valeska completes his transformation into The Joker in a decent episode of Gotham this week, albeit one dragged down by weak moments and a tedious subplot.
THE GOOD STUFF
THE NOT-SO-GOOD STUFF
2019-02-26
73%Overall Score
Reader Rating: (0 Votes)
0%