After exploring some heavy and intense themes with the establishment of Alpha and the Whisperers last week, The Walking Dead continued on a strong note this week, building even more on the Whisperers during their first proper interaction with the show’s lead survivors. “Bounty” was built on two core storylines, the first obviously taking place at Hilltop during the negotiation with Alpha, and the second following a self-professed, “Side mission” for The Kingdom, which involves Ezekiel trying to infiltrate a movie theatre to salvage a valuable projection bulb for the upcoming fair.

The subtext of abuse and trauma, and how it correlates with the most extreme foundation of survival, certainly made for a heavy narrative during the previous episode, which is why it was kind of nice to have a more light-hearted storyline with Ezekiel and co. this week. Carol even joined her husband on his special mission for the fair, learning the hard way about the seemingly frivolous thing that Ezekiel, Dianne and Jerry were ultimately after. It seems like such a little thing, but the idea of going on a quest for a projector bulb is fairly amusing on its own, and became all the better once Ezekiel and Jerry both explained to Carol that the love of cinema can forge lifelong memories that will spur children to grow up wanting to protect what they’ve built. Honestly, that’s pretty sound logic, and it did help to make this storyline enjoyable without making it feel silly or pointless. 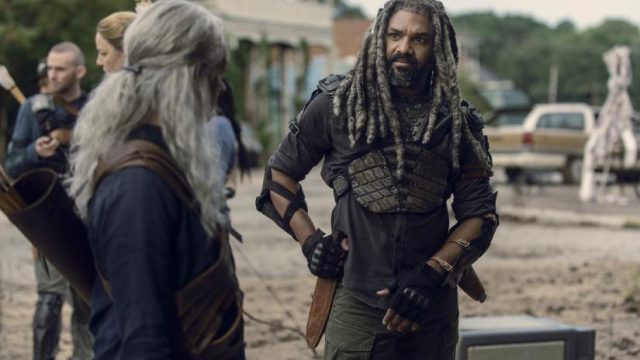 Thankfully, Jerry seems to have some sort of projectionist experience, since he’s able to unscrew the bulb without breaking or bursting it… Only to lose it a few seconds later because a walker surprises him and Dianne at the wrong moment! This was certainly a little contrived, but it’s fairly par for the course on The Walking Dead at this point, necessitating a last-minute battle against an encroaching herd of walkers that begin to surround the bulb. This is at least a cool sequence to watch, but it also once again highlights a growing problem that the show has routinely struggled with over its past few seasons; Herds just don’t seem like a big deal anymore. They’re more of a nuisance than an actual threat, it seems. Granted, this isn’t nearly as outrageous and illogical as the herd that was completely destroyed with no fatalities in Alexandria a few seasons back, but it’s still symptomatic of that same issue with neutering the horror behind the walker herds.

If anything can restore some of that horror and tension with the walkers though, it’s the Whisperers, and fortunately, they remain top-notch antagonists at this point. The first interaction between Alpha and Hilltop carries plenty of tension, uncertainty and drama, and even manages to deliver some potent moral ambiguity to boot! Alpha only wants her daughter back, but after Daryl witnessed how Alpha has been abusing Lydia, he and the other Hilltop leaders are disinclined to hand Lydia back over to the Whisperers. Alpha’s shows of calm intimidation, particularly when she summons even more Whisperers after Hilltop refuses to return Lydia, were especially effective, and Samantha Morton is definitely crushing the role, now that we’re finally getting to see her in full-on Alpha mode! This entire storyline may have simply amounted to a negotiation, with no combat at all, but that actually managed to work very well, prioritizing the inherent menace behind the Whisperers, rather than ruining them with cheap, disposable thrills.

The real highlight moment with the Whisperers this week however was when a Whisperer mother’s baby won’t stop crying, and a bunch of walkers start approaching the area, hearing the noise. Alpha ends up silently commanding the mother to abandon the baby, leaving it to be devoured by walkers, and calling it, “Natural selection.” This exceptionally embodies everything that is both dangerous and twisted about the new threat that Hilltop and the other communities find themselves facing, since Alpha is perfectly collected when sacrificing someone else’s child, despite coming to Hilltop for her own, seemingly against her own rules as the leader of the Whisperers. Connie, who stays hidden during the interaction, does manage to rescue the baby and get it to safety, with some help from Daryl, even if this does blow any combat advantage that Connie may have had, if Alpha had decided to attack.

In the end, Hilltop realizing that they truly had no choice but to turn over Lydia was both appropriate and heartbreaking. This not only perfectly rounds off the exceptional first impression by Alpha, who got exactly what she wanted without even having to lift a finger, but also forced Daryl especially to hand over an innocent girl, despite knowing how abusive Alpha is, and understanding first-hand, from experience, what that means. I certainly could have done without the ridiculous, futile effort by Henry to smuggle Lydia into a nearby house however, which Enid and Addy eventually get him to relent on. What exactly was Henry’s plan here? I understand that Henry is supposed to represent an idealized, youthful perspective, but at this point, one really has to wonder why the Hilltop citizens haven’t gotten tired of his shit, and kicked him out. How many times has Henry openly defied Hilltop leaders and elders now? He’s allegedly supposed to be a lot smarter than this, even when he’s facing an impossible scenario!

In the end, Daryl ultimately decides to go after Lydia in the dead of night, unable to live with the decision of handing her back to Alpha, and Connie decides to come with him, which closes out the episode. This was a smart way to play off of Daryl bailing out Connie in the cornfield earlier, and should hopefully help further integrate Magna’s group into the community at Hilltop, especially now that Luke and Alden have been safely returned by the Whisperers. It’s good to see that the back half of The Walking Dead’s ninth season seems to be turning out pretty well, with the Whisperers still well on their way to potentially becoming some of the best-realized villains on the show at this point. “Bounty” even did a great job of providing a surprisingly light-hearted, yet entertaining and effective storyline with The Kingdom, nicely leveraging that community’s unique position as a more whimsical arm of AMC’s Walking Dead universe, while still furthering the show’s storyline in a meaningful way. We’re still not quite at the level of the series’ high point during the third, fourth and some of the fifth season, but it’s becoming apparent that The Walking Dead is truly better than it’s been in years, despite declining ratings, and with Hilltop determined to keep provoking the Whisperers, I can’t wait to see what Alpha has in store for them next!

The Walking Dead 9.11: "Bounty" Review
The Walking Dead stayed on a strong note this week, thanks to Alpha confronting Hilltop for the first time, and a surprisingly great, light-hearted 'side mission' for The Kingdom.
THE GOOD STUFF
THE NOT-SO-GOOD STUFF
2019-02-26
84%Overall Score
Reader Rating: (0 Votes)
0%