Supergirl seemed like it was beginning to improve with its previous episode, but unfortunately, the show yet again fell back into old habits with, “Stand and Deliver.” This episode marks the latest political allegory regarding the Alien Amnesty Act, which Ben Lockwood now seeks to repeal with support from President Baker, upsetting the show’s leads, and triggering a peaceful alien march through National City’s streets. It’s about par for the course for a politically-charged episode of Supergirl, which is to say, it’s a few good ideas mixed in with a lot of infantile garbage. I’d be hard-pressed to get into every idiotic moment in this episode, but believe me, there’s more than enough to go around!

As I said, things kick off when Ben Lockwood announces on live television that he’s going to repeal the Alien Amnesty Act, which follows the latest failed assassination attempt on him by The Elite. Kara, Nia and J’onn are all working overtime in their superhero personas to round up Manchester Black and his crew of radicals, and the three even manage to capture Menagerie at the start of the episode, leaving Manchester, The Hat, and the Morai to keep carrying on the fight against the Children of Liberty, and anti-alien oppressors in general. They even get the interesting idea to use The Hat’s powers to teleport them to the Fortress of Solitude, using strength-enhancing gauntlets to open the way inside. 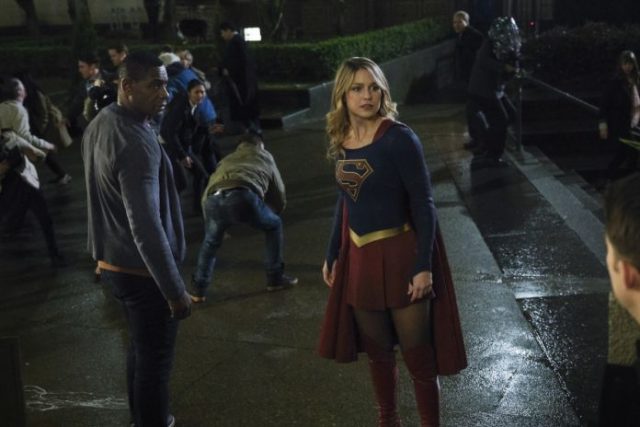 The idea of The Elite breaking into the Fortress of Solitude isn’t a terrible one on paper, especially regarding the payoff with the march. The problem here though is that the security measures in the Fortress of Solitude are pretty much non-existent, with Kelex not even bothering to alert Kara that anything is wrong! It’s only via Dreamer, with some help from J’onn, that the heroes discover what’s going on at the Fortress of Solitude, resulting in a brief scuffle that sees the Morai successfully apprehended, though The Hat gets away, and Manchester goes into a room with a baby Sun Eater, seemingly dying in the process. Uh, how did he know that was there? Moreover, considering a big argument between Manchester and The Hat, where The Hat appears to leave, this is quickly rendered moot, since The Hat apparently saves Manchester off-screen, with Manchester swiping some kind of hologram doohickey from the Fortress to boot.

Admittedly, the idea of pitting the show’s political camps all against each other, or at least most of them, at a protest that turns heated, isn’t terrible on paper. As usual though, Supergirl’s writing can be really awful, especially when the show is clearly trying to take on a political allegory regarding the Trump administration and political refugees, which it very obviously isn’t smart enough to properly examine or understand. Supergirl is constantly paying lip service to the idea of being impartial and examining every side of a debate, but in reality, the show leans so hard to the left that it’s falling over, and maybe that would be acceptable, if what it was saying was actually smart or meaningful or insightful, but it isn’t! These are the ignorant, frustrated ramblings of a pissed-off teenager, and it represents so much lost potential regarding the season’s better ideas. I would mention Alex having to be a bodyguard for Lockwood in this episode all throughout these events too, which is also a great idea on paper, but this idea is ultimately wasted, pointless, and contributes nothing to the story. It might as well have not happened! 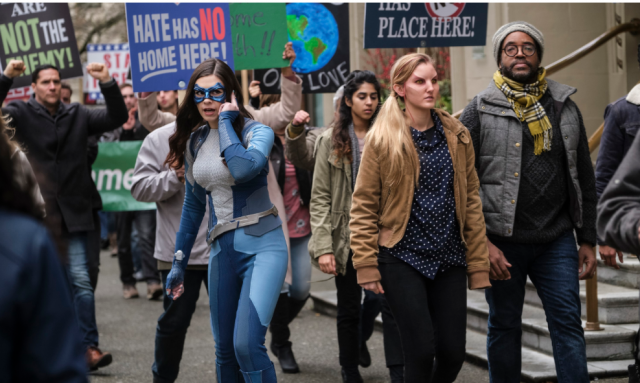 In any case, after the march makes its way to a rally being hosted by Lockwood (why Lockwood is hosting a rally in National City of all places, I have no idea, even considering its apparent stance as an alien welcoming ground), the situation inevitably escalates, and boils over once Manchester shows up, while creating several holograms of himself, and appearing to display powers. No, despite now having his purple hair from DC Comics lore after the off-screen Sun Eater escape, Manchester doesn’t appear to have actually gained his telekinetic powers from the printed panels. Instead, there’s merely several convenient jamming devices that prevent J’onn from just immediately tracking him down, partially from the Morai, who is apprehended and sent over to the DEO alongside Menagerie after the scenes in the Fortress of Solitude. Even with dwindling numbers though, Manchester and The Hat appear to be sustaining The Elite just fine by themselves, especially when I doubt it would be difficult for The Hat to just warp into the DEO and grab his buddies again. Actually, if The Hat’s hat can transport The Elite anywhere (it doesn’t appear to be limited by line-of-sight), why didn’t it just transport them directly into the Fortress of Solitude, rather than having to conjure gauntlets for the door?!

Fortunately, there are at least some decent story turns in this episode, even if they’re still heavily buried under the trite, insipid writing and direction. Manchester further provoking J’onn to return to the identity of the Martian Manhunter is still pretty great, and Manchester using the hologram device to trick J’onn into beating up a Children of Liberty agent that he thought was Manchester is actually kind of a clever move. Why didn’t J’onn just make all of the nearby Children of Liberty agents look like him then? Beyond that, James taking photos at the escalating protest, capturing some moments of humans helping aliens and vice-versa, is also an interesting examination of the power of imagery to send a message. The episode ending with James being shot and seemingly mortally wounded by a mysterious assailant was also not a bad way to wrap things up, nicely illustrating the other side of the coin when it comes to trying to enact change on your terms, namely that not everyone is going to accept it, and may resort to violent means to protect the status quo. 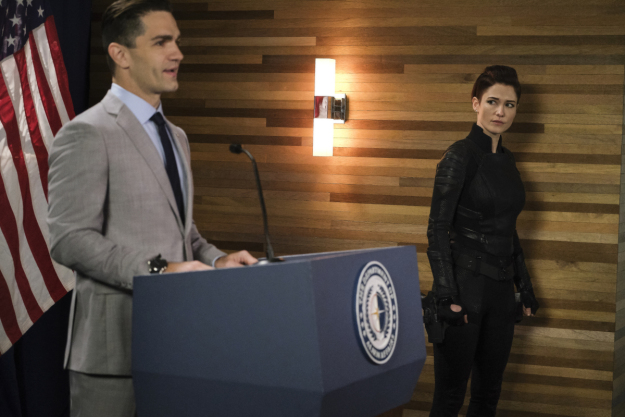 You can see so many interesting ideas and some legitimately alright commentary screaming to get out here, but, “Stand and Deliver” is still badly-written for the most part, falling back on overwrought displays of unrealistic solidarity and over-the-top melodrama to get its point across, rather than actually contributing intelligent thoughts to a real-world conversation. This is a problem that Supergirl constantly has, and yet consistently refuses to fix. It almost feels redundant to talk about Supergirl’s aggressive liberal bias or idiotic tendency to dilute and misunderstand very real political issues in the U.S. by this point, but the truth is that, “Stand and Deliver” feels like an obvious filler episode that doesn’t accomplish much else, beyond shoveling the same old shit at the show’s audience. I suppose that’s well and good if it’s preaching to the choir, but I’m definitely getting to the point where I’m thoroughly sick of Supergirl’s current anti-alien political conflict, which just constantly seems doomed to fall well short of its potential.