The Walking Dead has been struggling a bit with keeping its protagonists’ storylines as interesting and engaging as those of the Whisperers, but that finally started to improve in, “Chokepoint.” With Daryl, Connie, Henry and Lydia now on the run, Alpha sends Beta and a squadron of Whisperers to reclaim her missing daughter, while The Hilltop and The Kingdom both begin the next phase of their separate preparations for the fair. What results is a surprisingly engaging and well-done episode, one that firmly cements Beta as a dangerous new villain, while also making the escape with Lydia one that’s very well fought for!

The core storyline of the episode involves Daryl’s party holing up in a building, and setting up a chokepoint-style defense to try and fight back against the Whisperers that Lydia has assured are pursuing them. Since Alpha won’t send an entire army (obviously), Lydia correctly deduces that Beta will be the one to come after them, and sure enough, Beta shows up with several Whisperers, right after Daryl’s defense effort is complete. This is a very cool idea, and one that has sort of a tower defense feel, since a small herd of walkers also comes alongside the Whisperers, forcing Daryl’s crew to keep both eyes open for what’s coming, since it quickly becomes difficult to discern the difference between walkers and Whisperers. Fortunately, Daryl also has the foresight to shut Lydia away with Dog, and keep her out of danger, at least at first. 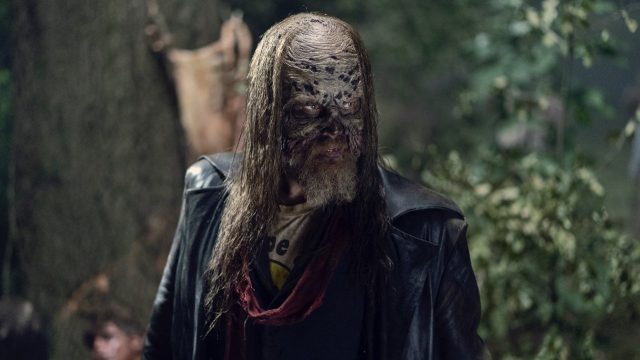 We get lots of exciting action here, and that’s awesome, especially after the previous episode was so light on it. Seeing Connie, Daryl and Henry all working together to take out Whisperers is plenty exciting, particularly with the added wrinkle on Henry’s end, namely that Lydia doesn’t want him killing any Whisperers if he doesn’t have to. Henry eventually gets cornered and has to be bailed out by Lydia however, who has to kill one of her own people to save Henry. The romance between Lydia and Henry is sweet, but it nonetheless feels a little bit hasty at this point, even for teenagers, since Lydia logically shouldn’t have a concept of romance, after being forced to live in Alpha’s psychologically oppressive survival conditions. I know that this budding relationship is supposed to be a surrogate for the Lydia/Carl relationship from the source comics, but surely, Lydia would need a bit more time to figure out exactly how she feels about Henry?

Regardless, things excellently culminate in a brutal confrontation between Daryl and Beta, which easily serves as the highlight of the episode. Beta’s sheer physicality is put on strong display here, as he’s quite literally tossing Daryl around a room full of unfinished, highly destructible terrain, while Daryl is trying desperately to fight back, having to resort to whatever weapons he can find just to hold Beta at bay! It’s a very cool moment, and perhaps one of the best confrontations of the season, in fact! It’s almost disappointing when the battle between Daryl and Beta finally appears to end with Daryl dropping Beta down an elevator shaft, and spitting after him, before rejoining his group. Obviously though, Beta is not going to go down so easily. The episode ends with Beta awakening at the bottom of the shaft, and slowly becoming enraged at losing his scuffle with Daryl. Clearly, he’s not about to lie down on the job of bringing Lydia back to the Whisperers! 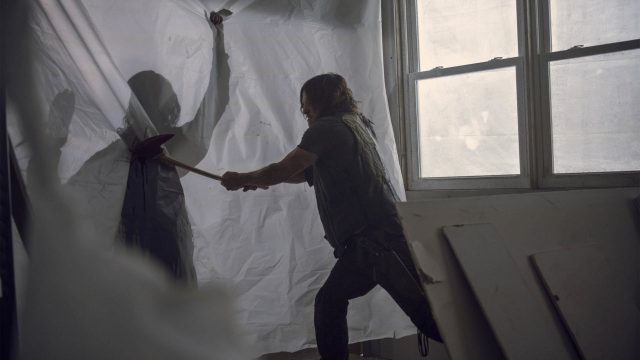 The subplots in this episode also happened to be surprisingly strong, giving The Walking Dead a hell of a surge in quality here. The Kingdom sees an equally appealing storyline, wherein they are sent a letter that demands they pay a toll to a mysterious party, or else the roads to the fair will be blocked. This leads to Ezekiel, Carol, Jerry and Diane going to meet the mysterious survivors, who are known as the, “Highwaymen.” The Highwaymen don’t exist in the Walking Dead comics, and appear to be a faction that’s entirely made up for the TV show (similar to Jadis/Anne and the Scavengers), but their charismatic leader, Ozzy, who boasts a cowboy theme (not unlike one of the new Fear the Walking Dead leads, John Dorie!), makes for a great presence. Likewise, Ezekiel’s soldiers managing to get the drop on the Highwaymen, and negotiate a protection job for them at the fair, without a single fatality, made for an outstanding testament to the progress of civilization, which Ezekiel has constantly fought so hard for, ever since the Saviors were defeated.

The negotiation with the Highwaymen couldn’t have come at a better time either. Tara happens to be supervising some road clearing with Magna, Yumiko, Kelly and a few other survivors, including Henry’s teenage friends and new surrogate parents, before the entire group is sought after by a walker herd! The survivors manage to hold them off for a while, but it’s Ozzy and his Highwaymen who ultimately bail them out, proudly declaring that they’re providing protection for the upcoming fair to Tara! This was a really strong, inspiring way for the show to reveal that Ezekiel successfully negotiated with Ozzy, since the episode cuts away before Ezekiel’s and Ozzy’s exact terms are laid out. There’s been a lot of dread and horror with the Whisperers lately, but it’s great to see that the show isn’t forgetting to inject some happier moments here and there, with the fair being a crucial source of joy and prosperity to come for the survivors’ communities! 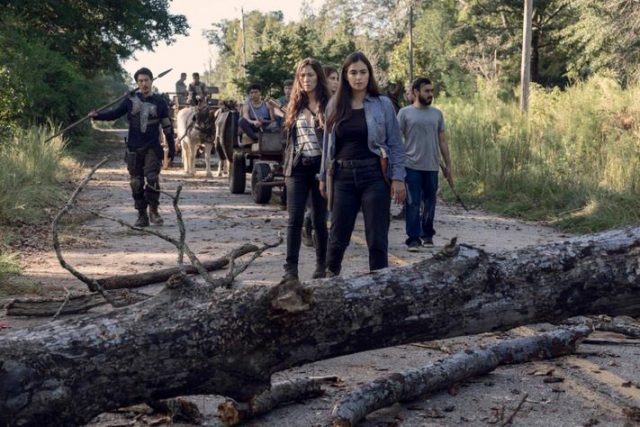 “Chokepoint” has The Walking Dead really excelling, and primed to keep excelling over Season Nine’s final handful of episodes. The action-packed defense effort by Daryl’s party, particularly that awesome fight between Daryl and Beta, was great enough, but the fact that the fair and what it represents is really starting to come into focus, complete with Carol bending the Highwaymens’ ear, after confirming that they will have movies thanks to the projector bulb, really rounded everything off well. This was definitely a more upbeat episode than usual for The Walking Dead, even considering that violent confrontation with Beta and the Whisperers, but this just goes to show how important it is for the show to have emotional balance, and not just be ridiculously depressing all the time. This is a sad world, one filled with death and violence, but that’s why it’s all the more important to hang on to the moments of hope and joy, something that I personally hope will keep being spotlighted effectively once the fair gets properly underway.

The Walking Dead 9.13: "Chokepoint" Review
The Walking Dead delivers an overall great episode with, "Chokepoint", thanks to a standout confrontation between Beta and Daryl, and Ezekiel getting some great new allies for the fair.
THE GOOD STUFF
THE NOT-SO-GOOD STUFF
2019-04-09
88%Overall Score
Reader Rating: (0 Votes)
0%