Arrow faced an interesting new challenge in trying to formally swear all of Team Arrow into the SCPD, since it had to justify the vigilantes’ actions through proper legal channels. This struggle came firmly into focus with, “Training Day”, which aims to showcase how Team Arrow is adjusting to their first proper mission with the SCPD, or rather, how they’re failing to adjust to it. The flash-forwards meanwhile feature William and Mia both trying to find the obscure technology through which they can hear Felicity’s secret message.

As you can imagine, the present-day events hit a lot of the familiar notes that Arrow has already utilized to create tension between the vigilantes and the SCPD; The police don’t like the vigilantes playing fast and loose with the law, while Team Arrow resents the sluggish and ineffectual police procedures that too often let bad guys go free. Seeing Team Arrow properly sworn in to the SCPD, and having to work under an increasingly pressured Dinah, starts out with some promise, though unfortunately, it’s not long before this episode becomes a disposable filler episode, one that basically only exists to undo the police limitations that were obviously bound to be undone to begin with.

Team Arrow’s first SCPD mission nonetheless centers around the effort to apprehend James Midas, a crooked CEO who has developed a series of highly corrosive acid bullets, and is aiming to sell them to rival gangs around Star City. Midas is actually a loose adaptation of a very obscure Green Arrow foe of the same name from DC Comics lore, albeit one that was a heavily disfigured freak with a corrosive touch in the printed panels. The acid bullets revision fits the style of Arrow and its gritty street justice themes pretty effectively, though as is all too common with The CW’s Arrowverse shows, Midas himself ends up being a shallow and highly disposable villain-of-the-week, even when the episode tries to show a connection to Mayor Pollard that ends up working to Team Arrow’s benefit later on.

I would go on about the expected friction between Team Arrow and the cops, but truth be told, it’s all the same procedure-based dick-measuring that Arrow has done to death already. It’s obvious that Midas will be captured in the end, even as the episode becomes pretty blatantly inconsistent with its own politics within the police force. What turns out to be more interesting is Dinah realizing that she can no longer use her Canary Cry, something that was also teased during the season’s former flash-forwards, on account of getting her throat slit by Stanley Dover a few episodes back. Dinah thus becomes the symbol of unity between the vigilantes and the SCPD, torn between her identity as a vigilante and a police captain, though this eventually allows her to take a chance on Team Arrow, leading to a successful arrest of Midas. Since Pollard was buddied up to Midas, Dinah then uses this as a catalyst to get Team Arrow working as a black ops vigilante unit, essentially undoing their need to work within SCPD protocols. Yep, that was bound to happen, because Arrow would be very boring otherwise.

Spaced between all of this vigilante/police drama are a couple of small subplots shared between Oliver and Felicity, and Laurel and Ben Turner. Oliver and Felicity essentially spend most of the episode debating how best to save the city and make it more secure for their future child, on top of picking names, and their biggest development here is confiding in Diggle that they’re expecting. Laurel’s subplot with Turner ends up being significantly more interesting, since Turner calls her in to Slabside, in order to tip her off that someone has murdered Ricardo Diaz. In exchange for Turner seeing his son, whom Turner affectionately calls, “Little hawk” (this may suggest that the Connor Hawke in the flash-forwards is actually Turner’s son, which would explain why he refers to himself as Diggle’s, “Adopted son”), Turner reveals that it was none other than Emiko Queen who burned Diaz to death! Emiko even admits to Laurel’s face that she did it, leaving the story arc hanging on a tense story thread, as Emiko’s morality is suddenly called into question in a big way, ironically by the most morally questionable of the show’s current heroes.

Regarding the flash-forwards, there isn’t too much to say in this case. We get a first decent glimpse of William and Mia combining their separate book smarts and street smarts, and covering for each other’s limitations, when they have to hang around a Star City flea market, in an effort to try and find a mini-cassette player. William thinks he finds one, only to pay big money for it, and have it swiped back by a child associate of the crooked dealer. Mia tries to rough the guy up, but can’t get around the police, until William devises a technical solution to lure them away. This eventually leads into the two siblings listening to Felicity’s message, which gives them coordinates, and says not to look for her. William and Mia are naturally ignoring that end of the instructions however, and are set to follow the coordinates right into The Glades. Once again, it seems to come back to something amiss in The Glades, and somehow, I have a feeling that we’re going to be seeing more drama between Dinah, Zoe and Rene soon. That said, the flash-forwards still moved at a snail’s pace in this episode, and didn’t really accomplish anything interesting. 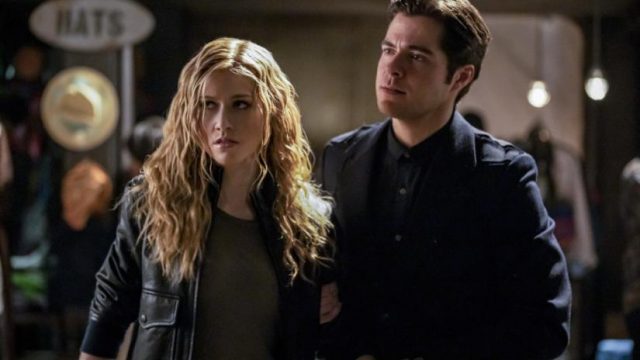 “Training Day” squanders a lot of its potential, and doesn’t end up being a very interesting Arrow episode in the end. There are some decent storylines here and there, particularly with Laurel confronting Emiko about killing Diaz, and Dinah having to try and stand tall as the Black Canary, even after losing her cry, and increasingly ending up under Mayor Pollard’s thumb. Overall though, Team Arrow breaking away from proper SCPD protocols was inevitable, and it seems like the show just couldn’t find a way to make their main police connection work for very long. Even the anti-vigilante act of Star City appears to be being repealed, which was also inevitable, considering the vigilante resistance that’s very much present in the flash-forwards. So, considering this, Oliver not being around, Connor Hawke now allegedly being Ben Turner’s biological son, and The Glades now being a walled-off paradise for the rich and powerful, does this mean that Legends of Tomorrow’s former trip to the future Star City of the 2040’s is now somehow non-canon? Whatever the case, I hope that Arrow can get back to better storylines soon, now that Team Arrow is done with this police partnership nonsense.