The Walking Dead really hit upon a great note in its prior episode, but, “Scars” surprisingly departs from that, in favour of a flashback storyline with Michonne. This episode finally fills in the blanks regarding exactly why relations between the communities broke down, and how Michonne was affected by the loss of Rick, back when it was still fresh. This unfolds via shifts between past and present, represented by yellowed cinematography during the flashback scenes, with the tragic events of Michonne’s Season Nine backstory complemented by her struggling with Daryl’s request to give Lydia temporary shelter in Alexandria during the present.

While Henry’s wounds are being tended to, Lydia continues to stand beside him, with Michonne eventually wanting to impress upon her in private the stakes of looking after Alexandria. The relationship growing between Henry and Lydia still feels like it’s moving very quickly, even by the standards of teenagers, but Michonne’s conversation with Lydia about what she’s had to do in order to keep her community safe nonetheless hit home very well. Michonne’s character has seemed very unreasonable ever since the post-Rick time jump, but it turns out that she really does have her reasons for being more concerned with her own people and less about the communities at large. This wonderfully came into focus in what could go down as one of the best episodes of the season, especially considering how well these ideas were tied in to the ongoing story arc with Lydia. 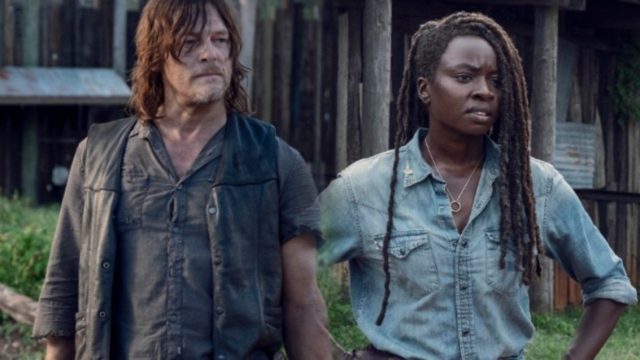 It turns out that, shortly after Rick disappeared, Michonne welcomed one of her former friends from the old world into Alexandria! Jocelyn, the survivor in question, was apparently one of Michonne’s best friends before the walker apocalypse, a woman that Michonne hasn’t seen in fifteen years. When Jocelyn thus stumbles into Alexandria, hurt and vulnerable, Michonne naturally leaps at the opportunity to allow Jocelyn into the community to heal. Jocelyn even has several children with her, the only survivors of a former group that lost all of their adults. With the children allowed to play together with Judith and Gracie, and Michonne able to re-connect with an old friend while pregnant and having lost her partner, it seemed like a surprisingly poignant and uplifting scenario took place in the wake of Rick’s disappearance, even if Michonne had just recently tried and failed to talk Daryl out of becoming a nomad, ever desperate to find any trace of his friend.

As you can imagine however, this bliss with Jocelyn doesn’t last. Michonne and several other Alexandrians wake up one morning to discover that their pantry and medical supplies have been pilfered, and Jocelyn has disappeared, along with Judith! It turns out that Jocelyn actually heads up her own little community of aggressive survivor kids, training them to be violent, strong and uncompromising. Jocelyn and the children apparently grabbed Judith and escaped through Alexandria’s sewers as well, which explains why the sewers are sealed off in the present. Further trauma is also shown when Michonne enlists Daryl for help in retrieving Judith, and both of them end up captured, being branded with an “X” as a result of torture, the scars of which were teased during prior scenes in the season.

The revelation behind the mysterious scars shared between Michonne and Daryl is quite interesting, and now stands as a bit more than simple symbolism of them being the two most affected characters when it comes to Rick’s disappearance. I do wish that Jocelyn was a bit more of a believable antagonist though. She’s yet another Darwinism-spouting extremist that’s all about the strong surviving, and Alexandria clinging to a dead world. This dead horse has been beaten so many times between The Walking Dead and Fear the Walking Dead alike that it’s tough not to just roll your eyes at the latest wingnut talking about strength above compassion. The angle with the mostly child-only survivor group is a bit more interesting though, if a tad unrealistic, even by The Walking Dead standards.

Still, Michonne having to put down Jocelyn, and later having to kill all of the rest of the children when they keep attacking her, with Judith in danger all the while, was a nicely heartbreaking and powerful moment, even if AMC censorship restrictions obviously won’t allow the sight of Michonne slaughtering a bunch of children. The episode does find a clever way around this however, with cuts between the past and present, as Michonne cuts through a series of walkers, desperate to find Judith after she runs off to, “Help her friends.” Judith mostly taking care of herself and taking out her own walkers, but still needing Michonne to save her from one last walker, was also the perfect way to end this tense situation. Surprisingly, it’s also Negan that actually puts Michonne on the right path to finding her missing daughter too, further cementing the legitimate surrogate father figure bond that Negan seems to share with Judith. I hope that the show keeps fleshing out this interesting new dimension to Negan, which is one of its more inspired ideas this season. I feel like we’ll probably be waiting until next season to see some bigger payoffs to Negan’s current character direction though.

“Scars” is a risky, experimental episode for The Walking Dead, but one that nonetheless excellently illustrates where things started to go wrong for Michonne, and Alexandria at large, after Rick’s disappearance. With the episode ending as Michonne and Judith finally take Daryl, Henry, Connie, and even Lydia, to the fair however, it seems like Michonne’s former demons have finally been resolved through Lydia to some extent. Judith carrying on the legacy of her late brother by fully motivating Michonne to re-engage with the other communities was great as well. Finally, despite the Whisperers only showing up in the final seconds, where two of them inevitably discover the fair and decide to tell Alpha, this episode largely thrived even without this season’s excellent new villains. Perhaps we’ve been a bit spoiled by the Whisperers lately, and this may be why Jocelyn seemed so unimpressive and trite in comparison, but with the fair now set to properly begin in the following episode, we’ll soon inevitably have more Whisperer-motivated chaos to look forward to, despite The Kingdom’s best efforts to unite a civilized new world under a revitalized economy of trade.

The Walking Dead 9.14: "Scars" Review
The Walking Dead soars with an excellent flashback-driven episode surrounding Michonne in, "Scars", outlining exactly what made Alexandria withdraw from the other communities.
THE GOOD STUFF
THE NOT-SO-GOOD STUFF
2019-04-13
91%Overall Score
Reader Rating: (0 Votes)
0%