Arrow’s flash-forward storyline, which has popped up throughout Season Seven’s run of episodes in place of the series’ former Oliver flashbacks, has often worked to mixed effect. It’s a very intriguing idea, though it sometimes suffers from the same occasional issue of meandering, or otherwise taking up space in episodes with present-day events that are far more compelling without the cutaways to the future. “Star City 2040” however makes the bold decision to base an entire Arrow episode around the flash-forward storyline, detailing the proper reunion of Team Arrow in the future, just in time for the major new threat to Star City to be fully revealed, including its surprising origins!

As usual, the flash-forward storyline can sometimes work to mixed effect in this episode. There are certain parts of it that are awesome, inspiring and very novel. There are other parts however that just disturb the pacing of the ongoing present-day Arrow conflict, namely taking up an entire week’s offering to instead showcase a story arc that is seemingly not that consequential to what’s going on during the show’s main events. Overall, “Star City 2040” manages to be a decent offering, but it still keeps coming back to the same villain desire to destroy Star City and build something new, which seems to be the agenda of too many Arrow arch-villains, even going all the way back to Malcolm Merlyn’s ‘Undertaking’ that aimed to level The Glades and rebuild it as a better neighbourhood during Season One. 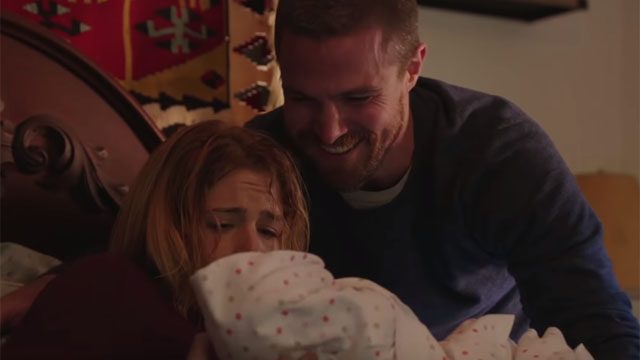 Some of the early portions of the episode are quite effective and nicely dramatic, namely showing Mia being born, Oliver being mysteriously absent throughout her life (Oliver’s fate remains entirely unconfirmed), and Mia being trained throughout her childhood by Nyssa Al Ghul, despite Felicity wanting to keep her far removed from Star City, or mainstream society in general. Fortunately, Felicity has a ridiculously faulty security system that Mia somehow circumvents by firing an arrow into an apple and hitting a photo (how the hell does this even work?!), discovering the truth about her father and brother, and learning that Felicity is still operating as a vigilante, even with Team Arrow having long since disbanded in the future. This prompts Mia to angrily leave Felicity’s secluded cabin, adopting her identity as Blackstar, and doing prize fighting to make her living.

As cool as some elements of Mia’s storyline are, the contrivances in this episode are difficult to ignore. It goes beyond Felicity having a ludicrously ineffective and yet also inexplicable security system in her cabin too. Somehow, after events go back to Mia and William trying to break into a company called Galaxy One, which is allegedly behind an imminent attack on Star City by The Glades, Connor Hawke bails them out of being caught by security, wherein we learn that he’s actually been a spy for an organization called Knightwatch the whole time. Knightwatch does exist in DC Comics lore, where it’s interestingly an offshoot of the DEO (this is a possible hint that the Supergirl universe may be folded into the main ‘Earth-1’ Arrowverse after this year’s Crisis on Infinite Earths crossover event), but the clunky reveal that Connor has been lying about his identity to Mia is pretty lame and forced. Mia being mopey and insufferable in general is also often a problem in this episode. She has badass moments, as usual, but why is Mia all of a sudden acting like an emotional head case with Connor in particular? 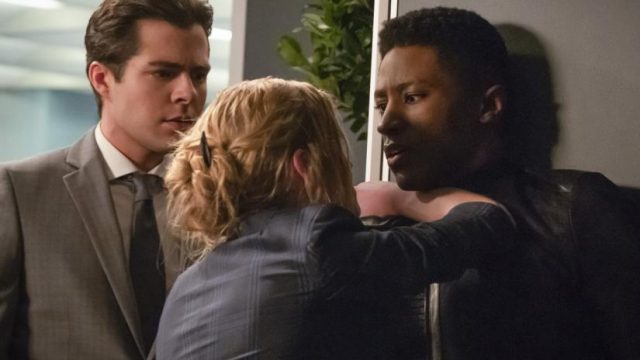 Obviously, the remnants of Team Arrow also show up just in time for Felicity to be rescued from Galaxy One, with Felicity indeed being alive and well in the future, and imprisoned by Galaxy One’s CEO, Kevin Dale. It’s here that we learn that Galaxy One is actually owned by Eden Corps., a familiar terrorist organization that battled Green Arrow in DC Comics lore, and interestingly, also appeared on The Flash as the Central City nukers of, “Enter Flashtime.” This raises another question however; If Kevin Dale is quite clearly the son of a known terrorist that was locked up in Iron Heights, how the hell would anyone not even remotely suspect that Galaxy One may not be a trustworthy company?! Like I said, there’s contrivance here, and not everything about Galaxy One and its agenda holds up to scrutiny. This is most evidently true with Rene picking this moment in the storyline, naturally, to do a massive heel-turn out of nowhere, and suddenly start being loyal to his vigilante friends again. Well, so much for setting up Rene as a morally ambiguous antagonist for the flash-forwards…

The climax of this episode is at least pretty cool however. The newly-reformed Team Arrow has to infiltrate a swanky mask rave in The Glades (I guess that’s a thing among high society in the Arrowverse’s future), with Mia almost successfully cornering Dale, only to lose him after a pretty impressive fight scene with his goons. Rene then thins the crowd by pointing out the vigilantes, allowing Mia to shoot a convenient bomb-detonating device out of Dale’s hands, which instantly stops Galaxy One’s plans to destroy Star City, and that’s the end of that conflict for now. Rene nonetheless has to keep feigning loyalty to Dale, just as Felicity had to pose as the new Calculator to infiltrate Galaxy One in the first place (for all the good it did), and Team Arrow still hasn’t managed to gain any serious new ground against Galaxy One/Eden Corps., even considering Felicity’s return. At least the final twist of the episode is pretty cool though, as events flash back to the present, showing Felicity upgrading her security system, and officially giving birth to Archer, the grand Star City-policing A.I. that Galaxy One wanted to take global in the future, after the city’s destruction! It’s a little expected, but officially learning that Felicity inadvertently causes most of Star City’s and Team Arrow’s problems in the future is still pretty promising.

“Star City 2040” doesn’t perfectly manage to improve the flash-forward storytelling of Arrow, especially when it sometimes has to force the story along with narrative conveniences and forced drama. Overall though, this was an interesting break from the main events of the show, setting the rest of the stage for the battle against the real enemy of the flash-forwards, even if this also comes at the expense of ignoring Eden Corps. and Kevin Dale’s mother already being established as known terrorists on The Flash. Hell, Kevin Dale could have at least changed his last name if he was going to run an obviously evil company like Galaxy One! Regardless, the latest tragic turn for Felicity should present some interesting parallels between the present-day events and flash-forwards, hopefully connecting both a little better overall. I’m still most interested in Arrow’s main present-day storyline though, especially now that another true villain is beginning to reveal themselves within it.