Tobias’ decisive big play against Black Lightning unfolds during Black Lightning’s second season finale, leaving all of Freeland under threat of a metahuman scourge! “The Book of the Apocalypse: Chapter Two: The Omega” delivered many much-anticipated payoffs to ongoing storylines from the previous episode, while also setting up a major new threat for Black Lightning’s already-confirmed third season. It also delivered some pretty solid action, as the rest of the Masters of Disaster are finally allowed to square off against the show’s heroes in earnest!

In terms of wrapping up the many ongoing story elements of Black Lightning’s sophomore season, “The Book of the Apocalypse: Chapter Two: The Omega” is another mostly solid offering, and certainly an exciting one to watch! The main hook of the episode is pretty great too, as Tobias employs Coldsnap to freeze over Freeland’s central power plant generator, leaving the entire city deprived of electricity. This is not only timed with a civil riot unfolding over ‘Cape Guy’ being shot dead by Freeland P.D. during the previous episode, but also leaves Jefferson unable to power up, since the electricity that he has to store and use against the bad guys is now cut off from him. It’s an incredibly cool idea, even if one that doesn’t always live up to its full potential, especially where Jennifer is concerned. 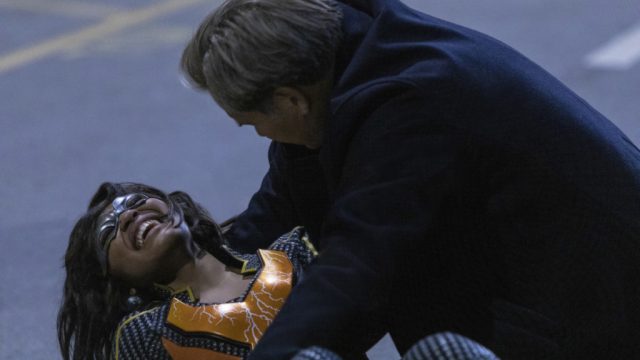 Turns out, the big cliffhanger with Jennifer didn’t end up amounting to much in the end. Gambi manages to reach Jennifer, and uses the power-regulating gloves he made for Jefferson to help get her internal electricity under control. Jennifer relying on a psychological projection of Perenna to get her powers under control is a little weird, but the idea of Gambi being critically injured after helping to stabilize Jennifer makes for another nice way to set the stakes for this season finale!… Except Gambi is just fine a few scenes later, making the question of whether he’ll survive entirely pointless. Adding insult to injury is that the show already flirted with the idea of killing off Gambi earlier in the season, and generally did it better, before Gambi was nonetheless revealed to be alive. With a fake-out over Gambi’s death having already occurred, this makes Gambi quickly shaking off his injuries from Jennifer even more of a let-down.

Fortunately, Jefferson and Anissa coming together to battle the Masters of Disaster makes for a very enjoyable moment, and is paired well with Gambi having Jennifer de-ice the generator so that Freeland can be full of electricity again. The big ensemble fight scene between Jefferson, Anissa, Coldsnap, Heatstroke, Shakedown and New Wave is mostly pretty strong, beyond a few obvious moments where The CW’s paltry budget clearly constrains the amount of effects that can be on display. Lala showing up to shoot Heatstroke dead is also fairly convenient (Heatstroke’s quick demise may also explain why he’s the one MOD character not mimicking the identity or gender of his DC Comics inspiration), and that, paired with the city powering up again, allows Jefferson and Anissa to neutralize the MOD metahumans, right as Jennifer decides to once again go rogue and chase after Tobias! 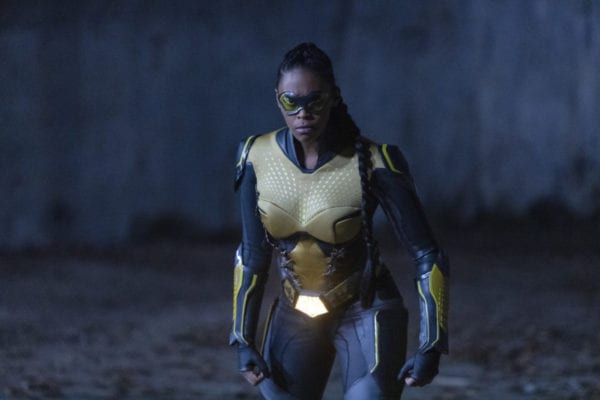 The climax with Tobias is a little more clumsy than the rest of the episode, but it does have some nicely intense moments that work well. An enraged and increasingly desperate Tobias unleashing the rest of the pod kids to try and cause more chaos around the city leads to him holding Cutter up by the neck at one point, motivating Cutter to dump him and walk out. Shortly afterward, Lala tries and fails to kill Tobias, before being disabled by a convenient triggering phrase that overloads all of his tattoos and neutralizes him. That’s a bit of an anti-climactic way to end Lala’s vendetta, but at least this also allows him to remain a hopefully compelling villain during Black Lightning’s upcoming third season. Finally, Jefferson has to talk Jennifer down from murdering Tobias with her powers, and obviously, he’s successful. This results in Tobias being thrown into an ASA black site, de-powered and helpless, but nonetheless determined to strike back at Black Lightning and his newest ally. Perfect. It’s an ideal position to leave the show’s arch-villain in, once we head into Black Lightning’s third season later this year.

There are quite a few developments that unfold as this season finale winds down as well, all of which are pretty great. Reverend Holt is revealed to have actually survived his poisoning by Cutter, which apparently merely rendered him comatose (though wasn’t he announced dead on TV? This may have been a hasty retcon), Agent Odell is revealed to have his own set of pods, one of which includes Khalil (!), and Dr. Jace ends up being whisked away by that teleporting metahuman from all the way back during the midseason finale from this past December! Yeah, it’s about time that clown finally got to Freeland, eh?! Regardless, Agent Odell also enters the Pierce household and reveals that he knows about the family’s superhero identities, and is officially swearing them into the ASA to help battle the coming threat of Markovia. Apparently, due to all of the metahuman activity, Markovia is about to invade Freeland, and Black Lightning, Thunder and Lightning are the city’s only hope of survival. That’s actually a very strong hook for next season, plus the Markovia turn proved to be a solid payoff regarding Odell’s shadiness and moral ambiguity with Lynn. 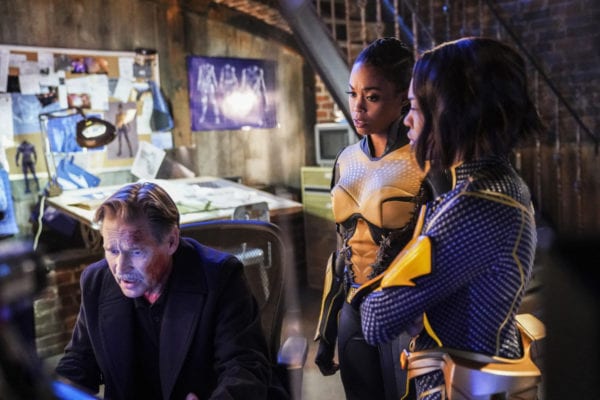 You don’t get quite as much spectacle as this season finale’s premise may initially suggest (again, we can probably blame The CW’s low budget for that), but, “The Book of the Apocalypse: Chapter Two: The Omega” is nonetheless a pretty good note to conclude Black Lightning’s second season on. The growing sloppiness and eventual capture of Tobias, one that seems to be sticking this time, made for a potent victory for the Pierce family, and the foreshadowing of Markovia as the show’s next big threat is pretty great, especially now that they’ve successfully snatched Dr. Jace for themselves. The Grace Choi drama with Anissa wasn’t addressed at all here, and was simply left hanging for now, but I’m not complaining, since that really seems to be a weak link in the storytelling lately. Black Lightning is thus left to go into its third season on a promising note, particularly with Jennifer officially becoming Lightning, and Tobias no longer being the biggest threat to Freeland. The Pierce family obviously won’t be shedding any tears over Tobias Whale being an ASA prisoner, but with an entire nation’s wrath about to come down on Freeland’s head, one has to wonder if they’ll eventually become nostalgic for the days of just one stubborn, enterprising criminal mastermind.

Black Lightning 2.16: "The Book of the Apocalypse: Chapter Two: The Omega" Review
Black Lightning's second season finale is a mostly strong offering that sets up a promising new threat, while also delivering some nice action with the Masters of Disaster.
THE GOOD STUFF
THE NOT-SO-GOOD STUFF
2019-04-13
83%Overall Score
Reader Rating: (0 Votes)
0%