After spending some more time chasing its tail with yet more pointless, meandering political posturing during the previous episode, Supergirl finally gives Superman/DC fans something big to look forward to in, “O Brother, Where Art Thou?”, namely the introduction of Lex Luthor! Previously only mentioned the odd time in dialogue throughout the show, the adult Lex Luthor is finally being introduced in the flesh for the Supergirl universe, portrayed by Two and a Half Men alum, Jon Cryer, who previously played Lex’s bumbling nephew, Lenny Luthor in 1987 movie, Superman IV: The Quest for Peace. A lot of this episode may revolve around James fighting for his life after the attempted assassination on him, but it’s clear that all eyes are going to be on Lex Luthor here, and what his introduction means for the ongoing battles facing both Kara and Lena.

Disappointingly, despite the big Lex Luthor introduction, “O Brother, Where Art Thou?” doesn’t manage to be a hugely compelling episode for Supergirl, and that’s frustrating. There are good elements to it, and it’s certainly an improvement over the very tedious,” Stand and Deliver” from the previous week, but most of the episode is spent with the lead characters impotently bumbling around the hospital, kicking up a stink over not anticipating James’ assassination attempt. This is especially problematic with Nia and Brainy, who unrealistically make the James situation their problem, making them both look like bellyaching narcissists. Worse still is that the show picks this moment to have Nia kiss Brainy for the first time, resulting in Brainy rejecting her. Was this really the best time to fully activate the implied Nia/Brainy romance? Neither character had a good storyline in this episode, and they might as well have not been present at all here.

There is something better attempted with Alex trying to appeal to James’ sister, Kelly (James has a sister?), after she rushes to the hospital, but even Alex’s character just clearly doesn’t have enough to do in this episode’s storyline. Alex spends the entire duration of events getting enormously pushy about Lena’s untested and unreliable Harun-El serum, and how Kelly should use it because James will risk paralysis or death if she doesn’t. Uh, Alex, why are you suddenly acting like next of kin for James? Alex even has the damn nerve to appoint herself next of kin when the doctor asks, which makes her look just as narcissistic as Nia and Brainy. Is Alex really even that close with James?! There’s also another interesting dilemma for Kara through Alex’s character, when Kara has to make an excuse to assist J’onn as Supergirl, provoking Alex’s anger, but the episode quickly seems to forget about this, making some hand-wave statement about standing together. Boy, the writers just really didn’t care about anything beyond Lex Luthor in this episode, did they?

Fortunately, the scenes with Cryer’s Lex Luthor are generally pretty good, even if Lex is given frustratingly little to do beyond whine throughout several sections of this episode. Oh come on, even Lex Luthor is a whiner on Supergirl?! Fortunately though, that’s not actually the entire truth, since Cryer’s Lex is somewhat meant to call back to Gene Hackman’s Lex Luthor from the classic Christopher Reeve-era Superman movies, being more comical and over-the-top to an extent, while still being a brilliant mastermind. Lex’s scenes with Lena often serve as the high points of this episode, even with Lex being confined to a wheelchair throughout almost the entire series of events, having had a stroke, resulting in him slowly dying from Kryptonite poisoning. This follows a legitimately great cold open for the episode, which shows a flashback from four years ago, when Lex wreaked havoc and destruction in Metropolis after creating red sun conditions to de-power Superman, with Lena bearing witness, and being present when Lex is first arrested. 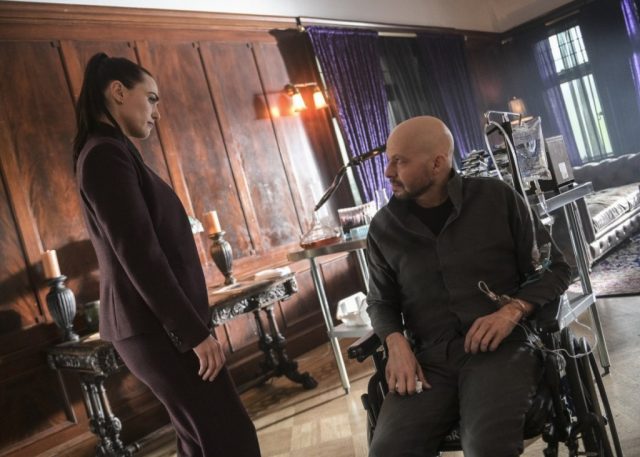 I almost wish that the episode had done away with almost every scene at the hospital, and instead revolved almost entirely around events at the Luthor Mansion, where Lena and Lex begrudgingly work together to finally perfect the Harun-El serum. Instead, we’re forced to deal with a lot of wasted time waiting for James to hopefully recover (which never really feels that uncertain, because this is Supergirl), while J’onn also immediately suspects Manchester Black of the assassination attempt (uh, that’s a leap, J’onn!), which happens to coincide with Manchester getting an ability to influence J’onn’s mind, after J’onn previously attempted to raid Manchester’s. It’s very contrived and stupid, but Manchester eventually stealing the Staff of Kolar (how? who cares, I guess), and baiting J’onn into stealing it back so that he could kill him, is at least a shocking moment for J’onn’s character. I wish that the whole J’onn/Manchester arc wasn’t packed with more crappy, contrived writing, but J’onn successfully killing off Manchester, by vaporizing him with the Staff of Kolar, was a nicely dramatic way for Manchester to win the weird psychological war that he had going with J’onn, forcing J’onn to realize that he is not a man of peace. Boy, if Manchester’s demise wasn’t forced into this Lex-focused episode, it might have had actual impact, at least beyond J’onn finally giving up on following in his father’s footsteps.

Like I said, practically everything that happens outside of the Luthor Mansion is practically a total waste in this episode, though at least the final twist is fairly decent. It turns out that Lex was the one who had James shot (which isn’t really that much of a shock when you think about it), and not only was Lex surprisingly telling the truth about Lena being his actual half-sister, born from Lex’s father’s infidelity, but Eve Tessmacher was actually a spy planted by Lex from the beginning! Eve being a spy for Lex makes a surprising amount of sense, since she apparently has degrees and intelligence out the ass, yet was also unrealistically ditzy and oblivious, while also jumping at the chance to work with Lena. Of course, the clue is right there in the name too, since Eve Tessmacher was Lex Luthor’s girlfriend in the Christopher Reeve-era Superman movies, so Eve being Lex’s mole was also potentially staring Superman/DC fans right in the face the whole time. Regardless, Eve helps Lex escape (it’s implied, though not currently confirmed, that Eve was also the one who shot James), and one of the guards around Lex is actually revealed to be Otis in disguise! There’s currently no explanation as to how Otis somehow survived his seemingly lethal injuries at the hands of the Hellgrammite (does this mean that Mercy is alive too?), but whatever. Lex has escaped, and he has his classic Superman movie crew with him, just in time for Supergirl to stare him down for the first time as the episode ends. 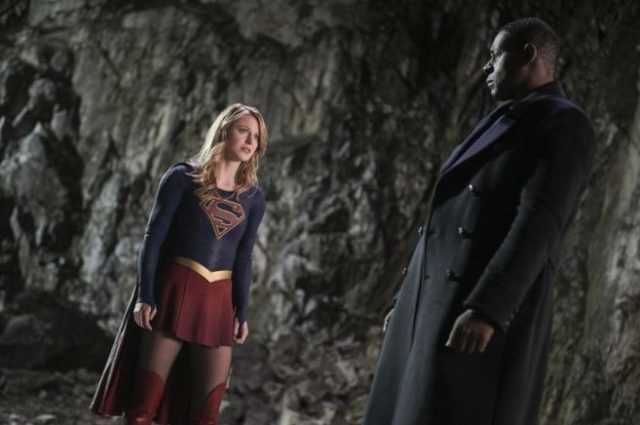 “O Brother, Where Art Thou?” at least did a solid job of introducing the Supergirl universe’s Lex Luthor, but it pretty much floundered and wasted time everywhere else. James is ultimately cured of his injuries in the end, thanks to Lena perfecting the Harun-El serum with Lex, though at the cost of Lex also being cured of his cancer with the same serum, secretly administered by Otis. Hopefully this means that Lex can become more of a serious obstacle in the following episode, even if he did manage to get one over on Lena in an inspired way. The big shock here is Eve’s true allegiance, being a spy for Lex the whole time, operating in plain sight at CatCo, and with Lena. I have to wonder if this means that Lex may end up having some sort of hidden hand with that Supergirl clone that’s still presumably training in Kaznia, since Lex could be a decent way to finally tie that storyline in with the rest of the show’s events. Whatever happens next though, I hope that Lex is given something more to do soon, now that he’s finally cured of his Kryptonite-induced sickness, and that goes double for the established leads, who really didn’t manage to accomplish much of anything while James’ life hung in the balance.