The decisive battle for Gotham City is fully on in the penultimate episode of Gotham’s fifth and final season, despite the series finale still lying ahead for FOX’s cult favourite Batman prequel series. “They Did What?” serves as the conclusion of Season Five’s, “No Man’s Land”-inspired story arc, with Gordon and Bullock rallying every cop and capable fighter left in the city in a desperate effort to hold off the approaching forces of Bane and Nyssa Al Ghul, until they can reverse Nyssa’s invasion order by snapping the general out of his chip-induced trance. Bruce and Selina also assist in the fight, protecting the refugees at the GCPD by trying to destroy the Wayne Enterprises building, in order to halt the advance of Bane’s and Nyssa’s army.

Overall, “They Did What?” makes for a very exciting conclusion to Season Five’s central story arc, providing balls-out action and thrills throughout virtually its entire runtime, as an intense final battle for Gotham City unfolds! There are a few story shortcuts that need to happen along the way, but it’s very cool to see the characters come together for one last grand battle, before the following week’s series finale presumably focuses more on introducing Batman, as the final piece of wrapping up Gotham’s overall storyline. This naturally means that there’s no final justice for most of the show’s villains, who must naturally return to oppose Batman in the future, but there is plenty to enjoy in this episode regardless, as Gordon and co. make one final stand at a barricade built before the GCPD building. 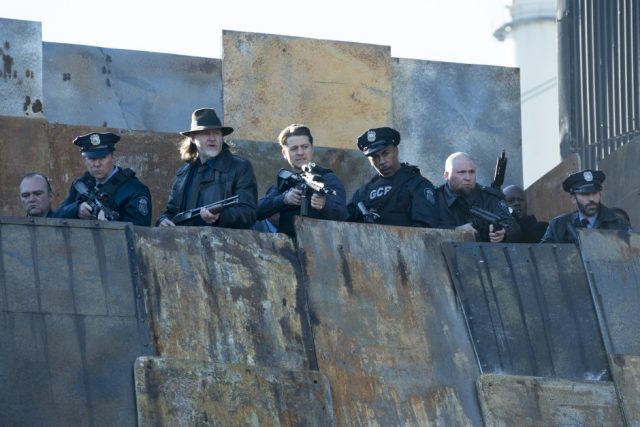 As the flash-forward from the start of the season indicated as well, Penguin and Nygma join the fight too, deciding that they can’t abandon the city that they love so much. This is both trite and expected, since Penguin and Nygma were bound not to successfully disappear, considering that they’re two of the most iconic and persistent foes of Batman in the future. Still, Gotham not really finding a compelling reason for the two criminals to stay, and simply throwing up its hands because Penguin and Nygma, “Love this city” so much, feels a bit lame, especially for two characters that spent the past several episodes rightfully determined to take whatever wealth they could, and run away together. We do at least get to see what’s presumably part of the inspiration for Penguin’s monocle however, after he dives in front of a grenade to protect Nygma, and gets shrapnel in his right eye for the effort!

As exciting as Gordon’s final stand is, the real emotional weight of the episode is spread between Bruce and Barbara, who each have more character-driven conflicts, while the cops try to hold off Bane’s forces properly, in a pretty great ticking clock scenario. After Gordon’s crew inevitably has to fall back, Gordon eventually learns that Barbara has been taken by Nyssa, who is holding her up in city hall. Gordon decides that he has no choice but to confront Nyssa, and he and Barbara do manage to take out Nyssa’s soldiers, forcing her to flee after she gets stabbed in the gut by the same knife that killed her father. Nyssa survives though, presumably to be something of a stand-in for Ra’s Al Ghul during Batman’s tenure in the future. She even gets away using Penguin’s and Nygma’s gold-filled submarine, in what was a twist that was admittedly pretty amusing and ironic. This turn would have been ideal if Penguin and Nygma didn’t have such a lame, forced reason to stay in Gotham City though.

Bruce having to destroy everything his parents built in order to buy time for the city’s survivors however is very nicely bittersweet. Bruce and Selina have to face Bane together as well, which once again feels a little underwhelming, especially since Bane should logically clobber both of them with ease. Still, after the two manage to hold Bane off long enough to get to the Wayne Enterprises building (with some help from a bat-attracting beacon, go figure), Bruce once again re-purposes Jeremiah’s battery to turn it into a bomb, successfully blowing up the building, which creates a huge barrier that forcibly redirects Bane’s soldiers. Bruce having to make use of Jeremiah’s deadly plan, the one that cut Gotham City off from the rest of the world in the first place, also made for a great dose of irony, while also challenging Bruce to wipe away his family’s former legacy, and fully commit to starting a new one all his own.

Unfortunately, as you can imagine, the show writes itself into a pretty tight corner with Bane’s seemingly unstoppable army, particularly when Nyssa successfully makes the mind-controlled general shoot himself in the head, seemingly leaving Gordon and co. without any remaining options. Gordon, Bullock, Bruce, Penguin, Nygma, Lee and Selina thus all prepare to sacrifice themselves, just as Barbara leads the GCPD’s refugees out using a series of sewer tunnels. Then, after Barbara and the refugees stand with everyone else, the soldiers just arrest Bane, and that’s it. Seriously? Sure, Bane makes a show of force beforehand by snapping the neck of another commander, but the soldiers couldn’t just do this before? It’s clear that the showrunners envisioned an awesome climactic battle for Gotham City to encompass Gotham’s penultimate episode, but they also clearly didn’t have much of an exit strategy for the idea. On top of that, the surprising ease through which Bane is taken down just makes Gotham’s take on the character feel even more lame and disappointing. 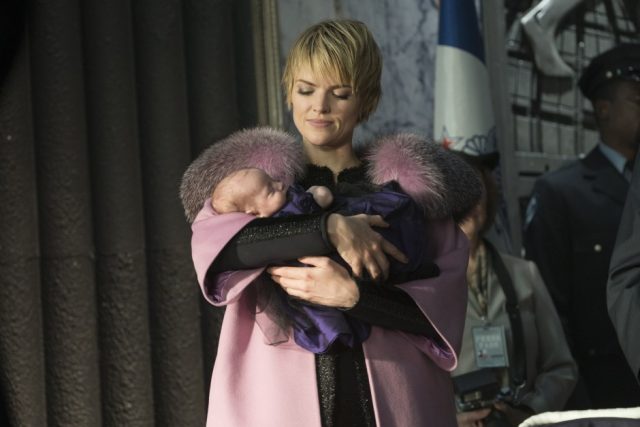 In the end, Gordon being sworn in as commissioner of the GCPD, and Bruce finally leaving to go on his character-defining pre-Batman journey, are all expected conclusions for Gotham’s proper final season arc, now that Bane has been stopped, and Nyssa has escaped. Still, “They Did What?” offers a lot of excitement, and some legitimately inspired moments of character for the show’s leads. Penguin and Nygma unrealistically staying behind to fight with everyone is undeniably forced, no doubt due to their status as show leads, and because of their future importance as Batman antagonists, though I suppose that the show somewhat makes this worth it by having Nygma declare that he only helped Gordon save the city so that he could take it for himself one day. This all leaves Gotham with pretty much all of its ongoing story arcs properly wrapped up in preparation for the fast-approaching series finale the following week, at least if we’re just taking for granted that all of the at-large villains like Hugo Strange, Poison Ivy, Mr. Freeze, Firefly, etc.. are all just biding their time until Batman shows up. I suppose then that we now merely have to witness the, “End of the beginning”, as it were.

Gotham 5.11: "They Did What?" Review
Gotham wraps up its proper final season story arcs with, "They Did What?", providing an exciting and epic final battle before the inevitable rise of Batman in the show's series finale.
THE GOOD STUFF
THE NOT-SO-GOOD STUFF
2019-05-04
80%Overall Score
Reader Rating: (0 Votes)
0%