NOTE: Spoilers from throughout the final season of, “Gotham” are present in this review

With the Disney-Fox merger now separating the FOX network from its former corporate parent, on top of DC’s apparent closing of the ranks with many of their DC Universe-inspired television shows, it was inevitable that Gotham’s days would soon be numbered. Fortunately, the show was at least allowed the chance to end on mostly its own terms this year, with a shortened final season that would complete the storyline of Gotham City in its pre-Batman days, which is more than Gotham’s former DC-inspired sibling series, Lucifer got, putting aside that Netflix resurrected that one. For Gotham however, this is truly the end, with its producers set to move on to Epix’s own upcoming Batman prequel series, Pennyworth later this Summer, a show that will move even further back from the Dark Knight’s actual origins, to a time before Bruce Wayne was even alive!

Before the FOX network confirmed Gotham’s imminent cancellation however, it was clear that a planned fifth season already had a story foundation laid out for it, specifically adapted from DC Comics’ “No Man’s Land” arc. As with its comic book inspiration, this Gotham season storyline resulted in Gotham City being completely cut off from the mainland, and abandoned by the U.S. government. As the many villains then begin to overtake the city, with no government oversight keeping them in check, Gordon, Bullock and the GCPD struggle to keep order, while managing survivors, supplies and the general sense of hopelessness that’s beginning to pervade Gotham City. It’s actually a very promising setup, and one that seems to lean perfectly into the imminent rise of this universe’s Batman. 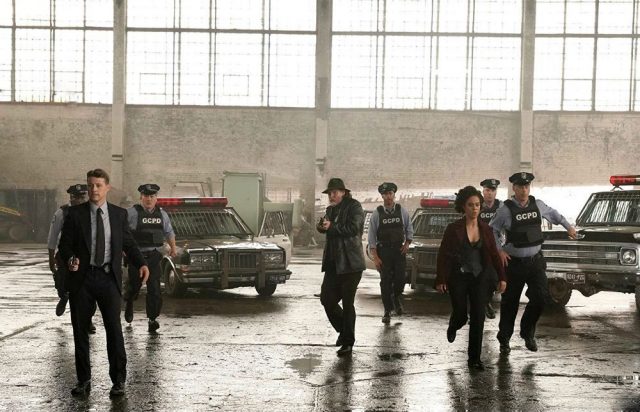 With only twelve episodes to work with however, including the series finale, which actually takes place ten years after the Gotham City abandonment is resolved, Gotham’s final season isn’t allowed to fully realize all of its big ideas. The season is entertaining and exciting to watch, but also quite uneven from a narrative standpoint in many respects. That’s frustrating, since it really did feel like Gotham was getting a little better every season before this point, with its fourth season now standing as the high point of the series’ run. Due to the truncated storytelling in the final season however, big villain debuts like that of Bane, now envisioned as an old army buddy of Gordon’s that ends up on a corrupt government official’s payroll, aren’t able to land with the proper impact, despite a big final battle for Gotham City being set up and engagingly executed for the series’ penultimate episode.

Some solid character arcs do manage to shine through here and there though. Despite the fact that many recurring villains like Mr. Freeze, Firefly, Poison Ivy, Zsasz and Scarecrow just end up being suddenly dropped from the show (we don’t even see Mr. Freeze and Firefly at all during this final season, despite both of them now supposedly controlling entire territories in Gotham City), Penguin and Riddler are at least given their own interesting story arcs as main series characters. Penguin becoming the city’s only remaining dealer for bullets and armaments makes him a necessary evil for both Gordon and the warring gangs to good effect, especially when he once again ends up in Barbara’s crosshairs after murdering Tabitha during the season premiere. Riddler, meanwhile seems to have shaken off being stabbed by Lee pretty well, but nonetheless finds an interesting mystery about what he’s doing when he sleeps, with his Riddler persona seemingly no longer in his control at all.

Bruce and Alfred meanwhile refuse to leave Gotham City, despite it likely being in their best interests to get out of dodge, with Bruce especially completing his final steps to becoming the city’s superhero protector over the course of this final season. We really see the partnership between Bruce and Gordon solidify here, as both characters become the key forces of saving Gotham City’s remaining citizens. Bruce headlines a few of his own solid storylines too, including one where he has to save Selina’s life, and in turn fuel her transformation into Catwoman. Bruce’s storytelling of course culminates in the triumphant return of Jeremiah Valeska, twice over, as well! Inevitably, Bruce is the one who is indirectly responsible for Jeremiah falling into a chemical vat, leaving him catatonic and horribly disfigured, until Jeremiah rises again in the series finale, as the mostly fully-realized Joker of the Gotham universe! It’s disappointing that the show seems to be unable to actually utter the names, “Batman” and, “Joker”, but we do get to see David Mazouz placed into the cape and cowl, using some CG work and a stunt performer, in the final seconds of the series finale. It’s as good as we’re going to get for a live-action Batman for the small screen at this point, and I suppose I’ll take it.

Like I said, Gotham’s final episode completely breaks away from the ‘No Man’s Land’ arc that comprises most of the season, picking up after a decade-long time jump, following Bruce deciding to leave Gotham City and travel the world, mimicking a key Batman backstory element from DC Comics lore. Right as the city finishes being rebuilt in the future, namely Wayne Tower, which is destroyed in the effort to stop Bane and his mistress, Nyssa Al Ghul (Bane being hired muscle, Batman & Robin-style, is bound not to sit well with many Batman fans, by the way), Bruce returns to the city, which also stirs Jeremiah from his catatonic state. The series finale thus hits the beats that many Batman/DC fans especially would expect it to, namely focusing on the rise of Batman, the finalization of the twisted and iconic Batman/Joker relationship, and Gordon staying on as the GCPD commissioner, to serve as Batman’s most steadfast ally on the side of the law. The final episode nonetheless still provides a solid exit for the series though, leaving every lead character in a good spot for Batman’s superhero career to come. It’s just too bad that we couldn’t actually see Mazouz fully realized in Batman’s cape and cowl without CGI assistance (in a bit of ‘Smallville Syndrome’, if you will), which inevitably leads to Gotham’s fledgling Batman being unable to actually fight and directly stop criminals on-screen, in another expected, but still inevitable disappointment for Gotham’s conclusion.

There’s a lot of storytelling crammed into Gotham’s busy, shortened final season, and it seems painfully clear that the showrunners were forced to end the series long before they actually intended to. Regardless, the final season of Gotham does its job well enough, nicely engaging viewers over its ‘No Man’s Land’-inspired core storyline, while also delivering a series finale that moves beyond that, so it can fully launch its universe’s Batman and Joker in a freshly-revitalized Gotham City. There are some big Batman villains that didn’t ultimately manage to make it to Gotham in the end, sadly, like Man-Bat, Killer Croc, Black Mask, and most of all, Two-Face, despite Harvey Dent also appearing on the series earlier on, and being just as abruptly dropped as several villains were during this final season. Still, the final season of Gotham also managed to squeeze in a few more recognizable Batman foes for the first time, between Bane, Nyssa Al Ghul, Magpie, Jane Doe and a cleverly altered version of Ventriloquist, complete with criminal dummy, Scarface. Not every storyline in the final season worked, but when it comes to wrapping up the key character arcs of Gordon and Bruce especially, Gotham managed to at least do that effectively, closing out the series with some decent satisfaction over its final run of episodes, even if Gotham definitely deserved to stay on the air longer than it was ultimately allowed to.

Gotham: The Final Season Review
Gotham's final season is forcibly truncated, and can sometimes feel busy and half-realized, but it does a good job of culminating the core story arcs of Gordon and Bruce, while nicely laying the foundation for its universe's Batman and Joker.
THE GOOD STUFF
THE NOT-SO-GOOD STUFF
2019-06-04
75%Overall Score
Reader Rating: (0 Votes)
0%