Off the back of Mr. Nobody’s tease about The Chief’s former Doom Patrol squadron, several of the new Doom Patrol’s members end up heading to the old team’s stomping grounds in, “Doom Patrol Patrol.” Picking up after the fallout of the Decreator incident, “Doom Patrol Patrol” nicely plays with the loose X-Men inspiration behind these characters, while also providing yet more exploration into the twisted psychologies behind both The Chief and Mr. Nobody. It’s a more tragedy-heavy episode, particularly with an extended emphasis on the early years of Rita’s Elasti-Woman identity, but still another Doom Patrol offering that’s pretty interesting to watch.

After discovering evidence that The Chief was formerly affiliated with a different batch of metahumans back during the 1950’s, Crazy Jane’s Flit personality takes Rita and Larry with her to another variation of Doom Manor, which has been converted into a school for super-powered students. You can thus see how the X-Men inspiration is coming out front and center here. The school’s teachers are the former Doom Patrol’s members, Steve Dayton, a.k.a. Mento, Rhea Jones, a.k.a. Lodestone, and Arani Desai, a.k.a. Celsius. These same characters comprised an earlier variation of the Doom Patrol in DC Comics lore as well, so it’s neat to see Doom Patrol bringing them into its own universe, despite the show primarily centering on modern Doom Patrol mainstays like Elasti-Woman, Negative Man and Robotman. 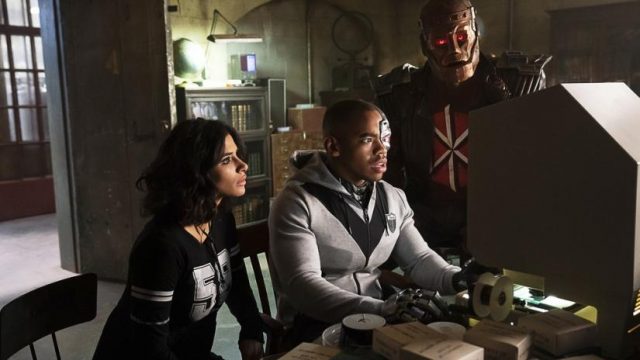 Speaking of Elasti-Woman, Rita gets an extended subplot in this episode, providing a peek into how she was attempting to live after disappearing from the public eye in the 50’s, following her mutation into Elasti-Woman. After accidentally smothering a lecherous producer to death, Rita ends up meeting The Chief, who enlists Mento to help Rita learn to control her powers. There’s clearly a missing piece of the story here, since Rita spent so many years locked up in a mental institution, but the surprise revelation that Rita had a romance with Mento ends up being pretty great, especially when it comes out that said romance ultimately ended badly. This marks one of the best Rita storylines on the show to date, which is awesome, since this episode’s Rita plot also nicely builds off of Rita losing Elliot, who doesn’t appear to have returned, despite the Decreator being stopped.

Disappointingly though, Jane and Larry aren’t put to nearly as effective use here. Larry ends up exploring The Chief’s supposed past with Arani, even going as far as to learn that The Chief supposedly married Arani at some point during years past! Jane, meanwhile, talks to the headmaster, Josh Clay, a metahuman who prefers not to use his own powers, with Josh revealing that Jane apparently had a room at the school once. All the while however, a suspicious disturbance in reality keeps hinting that something is very wrong at the school. This is an interesting tease, but it’s not helped by the fact that the backstory of the OG Doom Patrol members quickly contradicts the former facts that the show already established. It makes the big twist a little easier to spot than it should have been, despite Rita’s arc doing a pretty good job of carrying the episode nonetheless.

As it turns out, the entire school is a fiction. Everything, including The Chief’s ‘marriage’ to Arani, is a projection derived from Mento’s helmet, overseen by Josh, with the original Doom Patrol members now being geriatric and mentally unstable, believing that they are metahuman teachers in a fantasy world that doesn’t actually exist. This was a pretty cool turn, one that nicely deconstructs the obvious X-Men parallel that can be easily drawn with Doom Patrol, turning a seemingly utopian retired superhero existence into an unwaking nightmare. This all resulting from the heroes being formerly defeated by Mr. Nobody in years past was nicely chilling too, with Jane being tempted to the location by Mr. Nobody effectively functioning as a simple and effective threat to The Chief’s present Doom Patrol ranks. As much as Rita making peace with the aged and broken Mento was a good turnout however, the illusions that played with Jane and Larry end up being just that, and neither of their characters are ultimately able to move the story forward in this episode. The answers behind the great mystery of the OG Doom Patrol thus end up being effectively horrifying, but also disappointingly anti-climactic, leaving the new team like they just took a creepy side trip, rather than actually truly moved the ongoing battle against Mr. Nobody forward.

Unfortunately, another subplot with Cliff and Vic also doesn’t end up going anywhere that interesting. Silas visits Doom Manor to reboot Vic and restore his weapons systems, with Vic urging Cliff to make sure that his father doesn’t screw with his settings in any way. In exchange, Vic will help Cliff get in touch with his daughter via, “Facehole”, which I suppose is this universe’s humourous version of Facebook. This is a potentially interesting idea, one effectively shared between the Doom Patrol’s two cybernetic members. Unfortunately though, not much ends up resulting from this storyline. Silas simply relents on Vic’s independence after a forced blowup from Cliff, and once Cliff gets into his daughter’s Facehole account, with Vic’s help, he merely discovers the obvious; His daughter has moved on. Sure, Cliff’s daughter moving on with Cliff’s former friend that his wife apparently cheated on him with presents some promise for later, but it still doesn’t create much of a sense of the show’s storyline effectively moving forward.

Perhaps, after all of the over-the-top madness with the two-part Decreator storyline, Doom Patrol needed a bit of a breather. I can certainly understand that. Overall though, “Doom Patrol Patrol” feels like it falls shy of its potential. The twisted and tragic fate of the OG Doom Patrol at the hands of Mr. Nobody is nicely scary, but it also doesn’t do much for the show’s current leads, aside from Rita. Rita is definitely the MVP of this episode in every respect, which is easily the best thing about it, since Rita’s storylines have often been overshadowed by the Doom Patrol’s other members up to this point. Even back at Doom Manor however, Vic and Cliff don’t manage to make the most of their own storyline, which hits predictable beats, and doesn’t effectively keep audiences on their toes. Some of the show’s exceptional humour, and especially its sense of tragedy may be intact here, but it’s clear that Doom Patrol has to recharge after really kicking up the insanity with the Decreator battle. Hopefully all it takes is one episode though, and we can get back to top form with the next episode.