Although I read and write about video games on an almost daily basis, some things still sneak up on and surprise me. One such case of this is Layers of Fear 2, which I somehow avoided reading or hearing about until just before it came out. It was a surprise, for sure, and a dark one at that.

An unexpected sequel to 2016’s half-decent original, Layers of Fear 2 is a standalone experience that isn’t narratively glued to its predecessor. Thus, instead of dealing with the mad painter, his creepy mansion and his poor family whose body parts became part of his process, this story is told out on the open seas. Not in the water, itself, but aboard a luxury cruise liner from the olden days.

Players awaken in the body of an actor, who’s been recruited by a famous director with plans to shoot his masterpiece aboard a cruise ship. Although never really seen, his presence is always felt, and his voice is never far away. He commands, leaves notes and expects his star to do as he’s told. What he wants most, though, is for the player to truly become their actor’s character, which is easier said than done because it involves puzzles, monsters and spooky hallways.

The game’s story is purposefully obtuse, and its multiple endings don’t necessarily help much either. Through playing, those with interest will gleam and discover things about the ship, those who inhabit it (but are almost never seen) and the monsters that lurk within. Notes play a big role, as do old recordings, pictures and items (which spark brief narration when picked up). Things are never that clear, though, and the story ends up being a bit confusing no matter which ending you get. 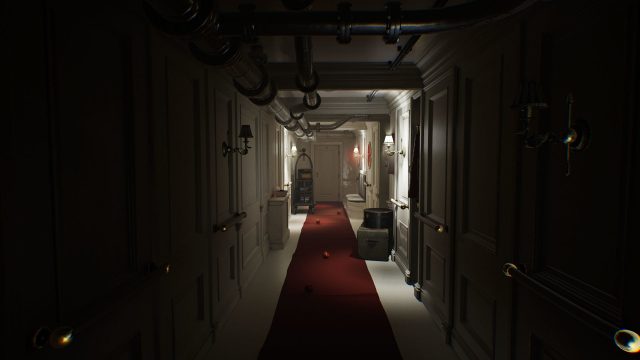 Layers of Fear 2 takes place over the course of five different acts, all of which combine to tell its story through ‘walking simulator’ trappings. Each chapter is different in its own way, and the major difference usually pertain to where they all take place. However, one lets you play as a child, while another shows an entirely different side of the ship. They’re all quite similar in terms of gameplay, though, despite being somewhat different aesthetically.

Like before, the idea is that you’ll explore the ship, solve its puzzles, run from its monsters and pick up as many notes, items, slides, movie posters and other collectibles as you can. This means lots of walking in a first-person viewpoint, as well as a good amount of environmental interaction. By that I mean having to use the controller’s right trigger and left joystick to open doors, turn wheels, pull out drawers or solve puzzles. This is generally pretty straightforward and goes off without too much of a hitch, but the controls are never as tight as they could’ve been, making some parts (slightly) frustrating. This is only ever truly problematic when monsters are chasing you, because those segments sometimes require you to open or lock doors while running.

These monster chases are by far the worst part of the game. Sure, they’re tense and slightly scary, but they’re also very simple and can be very annoying. Since the ship is always changing, it can be hard to tell where you’re supposed to run, leading to trial and error as the monster hunts you down and kills you. There’s no need to really worry about this, though, because the checkpoints are fair and the loading times are short.

The ship is truly ever changing, and is almost never the same. You may go down one hallway, turn around and notice that things have become very different. Sometimes this is triggered by picking an item up or touching something, but you don’t necessarily need to do anything for it to happen. The game is designed in a way that is meant to be disorienting, and it tries to keep you on your toes by constantly changing its locations around. It especially loves adding new doors, rooms and hallways, creating paths that weren’t there the first time around.

Of course, this is all a way of creating a sense of delusion and madness.

For the most part, Layers of Fear 2‘s gameplay and its requirements are pretty straightforward. Despite its love of change and transformation, the ship isn’t too difficult to get through, nor are its (limited and pretty basic) puzzles overly difficult. At least for the most part. There are three or four obtuse ones that might have you looking for a guide after becoming frustrated, but they’re few and far between. They also tend to appear in the latter half of the game.

A puzzle in Layers of Fear 2 could involve moving a clock hand to select specific numbers, or it could require touching something in one room to make another room or route appear. Others involve pushing slides through a projector in an attempt to find one that blends into the real world and offers something to pick up or go through, be it an item or a door. The slides are pretty creepy, too, as is a lot of the imagery in this game. Be prepared for lots of creepy, moving mannequins, arms that appear out of walls, and loud noises. Deterioration and disembodied voices too.

At the end of each chapter, the actor returns to his suite, where he can look at collected slides, listen to discovered recordings or examine special (collectible) items. There is also a porthole that can be looked through with a telescope; something which will net you an achievement or trophy if you do it every possible time. Your goal there is to look for, highlight and hold the telescope on items floating in the water.

This is certainly a creepy and unsettling game, which makes good use of its mix of colour and black and white filters. It looks fine, but slightly dated, has tons of disturbing imagery and makes you think throughout. There’s just nothing special about it. We’ve seen and played all of this before, in different and even better games and movies. The campaign also starts off slowly and takes a while to both get going and get good, which is too bad because the potential for greatness exists within its building blocks.

All in all, it’s just an okay, decent at best game. It doesn’t stand out, nor does it have much to warrant multiple playthroughs. Sure, different endings (which are based on decisions made at key moments, where the director asks you to shoot certain mannequins or follow another of his orders) may intrigue some, but probably aren’t enough to lure most to complete this thing more than once. I had some fun with it, but would be lying if I said that I was never bored, or that I never wished for the game to hurry up and end.

If you’re curious about visuals and audio, Layers of Fear 2 is fine in both regards, but won’t set your world on fire. Bloober Team’s engine is somewhat dated, and the visuals they’ve created for this thing aren’t incredible. Still, the ship looks pretty good, and the visuals do their job throughout. The audio is actually better, because it creates a decently disturbing atmosphere, using fitting sound effects, loud noises and limited, but pretty decent voice acting.

At the end of the day, Layers of Fear 2 is a game that will only appeal to certain folks. It’s a slow burn, and an unsettling (but never truly scary) one at that. The gameplay is also pretty basic, the story is somewhat confusing, and the monsters leave something to be desired. That said, there’s some charm to this thing and it might be worth playing through if you’re itching for some ‘walking simulator’ horror.