With Kara and Lena headed to Kaznia to continue uncovering the true plot of Lex, National City continues to be left at the mercy of Lockwood’s DEO, while Alex gets surprising news about her former adoption prospects. “Will the Real Miss Tessmacher Please Stand Up?” thus keeps the heightened momentum of Supergirl’s Season Four climax going pretty strong, particularly now that the show has mostly dumped the heavy-handed, adolescent political commentary for now, in favour of just focusing on crafting a good, interesting story.

Kara’s and Lena’s trip to Kaznia mostly continues to keep laying the groundwork for the inevitable big battle between Kara and Red Daughter, but it’s also another interesting and unpredictable trip into Lex’s machinations. After just barely dodging an unnatural lightning defense system in Lena’s plane (how exactly was this built, even by the standards of the Supergirl universe?!), the two women land and find Lex’s Kaznian compound, which has been abandoned. The only person left behind appears to be Eve Tessmacher, who is suddenly docile, and seems surprisingly helpful when it comes to telling Kara and Lena about Lex’s plans. As you can imagine though, things obviously aren’t as they seem here, particularly considering this episode’s title.

There is a genuinely creative trap set up for Kara and Lena here, and by extension, Supergirl, as it’s soon revealed that ‘Eve’ is actually a clone created from a treatment that was reverse-engineered from Kopy, one of the aliens that attacked the fairgrounds earlier in the season, where Mercy and Otis were killed by the Hellgrammite. This effectively explains why the ‘Eve’ that Kara and Lena first met in the abandoned compound is so docile and seemingly absent-minded, since Kopy’s clones get more powerful, at the cost of each clone getting gradually lesser intelligence. The real Eve is seemingly still present though, triggering the self-destruct mechanism on the compound, and later fighting Lena in her plane. Kara has to fight off a squad of Eve clones in her Supergirl garb all the while, shortly after also discovering where Red Daughter lived, and how Lex seems to know every detail about Kara’s personal life, including her secret identity, and her affiliation with Alex! This completes arming Kara and Lena for the battle ahead, despite the ‘Eve’ that confronted Lena also being revealed as a copy, leaving most of the cards still effectively in Lex’s hand for Season Four’s final two episodes to come.

Alex also headlines a very strong subplot in this episode, after she starts befriending Kelly, and is informed that a baby may soon be freed up for her. Left with mere hours to make the biggest decision of her life, Alex eventually decides to travel out of town with Kelly, in order to adopt the baby, but finds herself facing her emotional struggles all the while, including how she left Maggie. This not only made for a great way to reconcile Alex’s former demons, while in turn leveraging Kelly’s skill as a therapist, but also foreshadowed a great potential romance between Alex and Kelly, after it’s revealed that Kelly happens to be a lesbian as well, and lost her own lover during her time in the military. Alex and Kelly don’t necessarily need to get together to be great for each other, but I certainly wouldn’t mind Alex gaining a new love interest for some key emotional support, especially after Lockwood has so efficiently exposed the many vulnerabilities behind the DEO’s government connections. I wasn’t even disappointed about Alex’s adoption falling through either, since her bonding time with Kelly made her trip far from wasted, even just in terms of the storytelling. 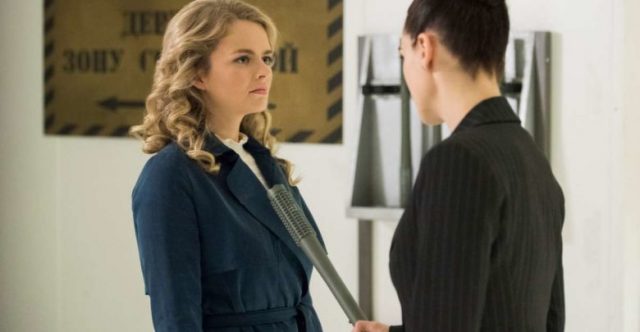 Speaking of those vulnerabilities, we got another Lockwood-heavy episode of Supergirl here as well, which begins with Lockwood and his son being in attendance at Lydia’s funeral. While George is speaking however, Lockwood steps away, and immediately begins devoting every DEO resource to finding the alien who killed his wife. As inevitable as it always seemed, seeing Lockwood gradually lose it, and become entirely consumed by his quest to apprehend seemingly every alien in National City, is both dramatic and nicely engaging. Lockwood even grabs his own unstable version of the Harun-El serum, and brings it with him once the alien who murdered his wife is inevitably found. Despite Brainy’s warnings as well, the serum appears to successfully give Lockwood his own powers, just in time for the powered James and Dreamer to arrive, right after Lockwood attempts to apprehend an entire alien shelter in a fit of rage.

The climax with Kara and Lena in Kaznia generally went over pretty well, but if there was one sticking point to this episode, it was the fact that the other elements of the climax felt pretty rushed. Lockwood’s serum not having any side effects at all, despite being an unstable prototype, feels far too unbelievable, especially considering the sheer amount of test hearts that Lena burned through while trying to perfect the serum. Similarly, Brainy getting the entire DEO force to stand down by saying, “Follow their hearts” is way too cheesy and stupid, even by Supergirl standards. It’s even more inexplicable why J’onn eventually throws Lockwood into a tanker, and then J’onn and Brainy just… Leave him there? Sure, this provides a convenient opportunity for George to fully announce that he hates his father and is abandoning him, but it felt like the writing started to come apart here, with only the Red Daughter foreshadowing seemingly landing with the desired effect.

We do get a pretty strong cliffhanger for the next episode however, once Kara goes to President Baker with the evidence against Lex, which tells of a coming Kaznian invasion against the U.S. President Baker then responds by putting a black bag over Kara’s head, seemingly revealing that he’s also in on the conspiracy to unseat U.S. authority, and allow the Kaznian invasion to happen! It’s not surprising that President Baker is corrupt, and that Lex probably got to him too somehow, but that being said, I would love if this led into a President Luthor setup for Supergirl’s upcoming fifth season! Regardless of what happens later in the show’s run though, “Will the Real Miss Tessmacher Please Stand Up?” proved to be another emotionally charged and entertaining episode of Supergirl, keeping the show in strong form as it heads towards its Season Four finale. Lockwood’s hasty fall as a father and rise as a super-villain was the main sour note in an otherwise strong episode, but hopefully that ends up going somewhere interesting over the course of the season’s two remaining episodes, especially considering that Lockwood officially has nothing else to lose now.