After slowing down a bit in the wake of the Decreator storyline, Doom Patrol continued on its more downbeat, character-focused tone with the following episode, “Therapy Patrol.” This episode goes for what becomes something of an ironic experimental style for the show, namely having the lead characters completely stay within Doom Manor for the entire episode, and do little besides talk to themselves and each other. It’s a clear attempt to dive deeper into the strained, eccentric psychologies of Doom Patrol’s lead heroes, as they continue to try and determine their next move against Mr. Nobody, but unfortunately, this story direction is also something that works to mixed effect overall.

The framing device behind the episode is initially interesting, as it cycles between the perspectives of each Doom Patrol member, with each point of view picking up after Vic calls a team meeting. Starting with Rita, then Larry, then Vic, then Jane, then Cliff, the episode becomes framed around each character’s struggles, eventually culminating in a group therapy session called by Cliff. Sometimes, this can do a nice job of fleshing out the characters, especially since this episode does at least seem to get the more tedious ‘therapy’ arcs out of the way early. Disappointingly though, Doom Patrol once again fumbles when it comes to injecting a good amount of humour and zany surprises to balance out the increased emphasis on tragedy and drama here, making this episode feel like more of a slog than it really should.

Ultimately, the payoff isn’t terrible, but like I said, some Doom Patrol character profiles end up being better than others in this episode. After getting a really superb storyline in the previous episode for example, Rita unfortunately regresses back to being a snarky blob of unhinged emotion, retreading the same old story beats that she already did in prior episodes. Likewise, Vic once again gets into a spat with his father, over Silas’ overbearing desire to take control of his technology, seemingly undoing both Vic’s and Silas’ positive father/son relationship developments from the previous episode. Vic then spending most of his subplot screwing around on a dating app, only to delete it, also doesn’t contribute much that’s all that worthwhile to his character. There’s a point later wherein Vic seems like he’s better opening up, after confessing to the team that he killed his mother, but even this doesn’t end up going anywhere interesting.

Fortunately, Larry fares a little better, as the negative energy spirit within him continues to attempt communicating. Larry keeps being taken back to a memory where he was with his illicit lover in a pickup truck parked by some train tracks, but when details of the memory are wrong, and Larry gets frustrated, he begins to feel a sense of despair at the cowardice he previously felt as a gay man. This was a little more poignant and effective, as the spirit begins using Larry’s memories to try and form a bridge to his thoughts and heart, so the two can appear to find some common ground. Larry still doesn’t manage to form a perfect bond with the spirit, but he gets just a little bit closer, while also opening up at least a little bit to the other members of the Doom Patrol. Larry’s arc is still not a perfect one here, but it’s better than what Rita and Vic were ultimately saddled with, that’s for sure. 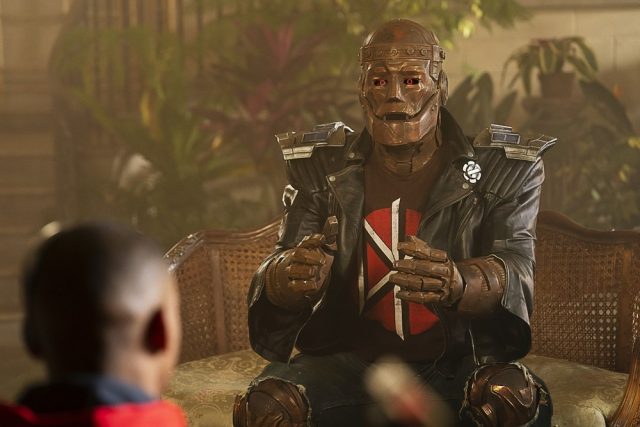 Jane ends up faring a little better in her story arc too, even if it was Cliff that ended up getting the best storyline in this case. Jane’s Hammerhead personality continually comes out to rub everyone the wrong way yet again, and after Jane and Hammerhead disagree about their former history with The Chief, they begin grappling over the evidence. Hammerhead then self-destructs and tries to destroy all of The Chief’s tapes and documents in a fit of rage, with Jane vainly trying to stop her. By the time Jane then sits with the other Doom Patrol members shortly afterward, an uncomfortable truth from another of her personalities is naturally ready to come out. Jane presents a painting depicting an enraged Vic surrounded by the bodies of the other Doom Patrol members, apparently painted by The Hangman’s Daughter, one that paints a gruesome portrait of Vic’s inner pain, and seemingly predicts Vic once again becoming a violent offender in the future. Jane and Larry are nonetheless the two Doom Patrol members that ultimately reject their therapy efforts, but Jane’s warning about Vic does present a nice tease for later, especially when we learn what’s really been going on with Cliff at the end of the episode.

Eventually, despite the storytelling pieces not initially fitting together, it becomes apparent that Cliff is glitching in some fashion. After several fits of uncontrollable rage, Cliff appears to have a full-blown psychotic break, and begins hallucinating both his daughter and his former best friend. After destroying a few things, and needing to be subdued by Vic more than once, it’s Cliff that comes up with the idea to try and get the Doom Patrol to discuss their issues in an improvised home therapy session. Cliff trying desperately to unite the team through shared communication is actually a pretty good bit of character evolution for him, one that also doubles as a handy chance to have Cliff confronting his own demons regarding the loss of his daughter, how she moved on, and how Cliff ultimately became his own abusive, deadbeat father, despite never meaning to do so. The one great bit of humour in this episode comes out around this point too, when it’s revealed that Cliff’s ‘glitching’ was being caused by a vengeful rat named Admiral Whiskers, who is being commanded by Mr. Nobody. After Cliff unknowingly ran over his mother in the Doom Patrol bus during the pilot episode’s events, Admiral Whiskers swore revenge on Cliff, revenge that Mr. Nobody was all too happy to help Admiral Whiskers see through! It’s a legitimately funny twist that makes a disturbing amount of sense, at least by Doom Patrol standards. 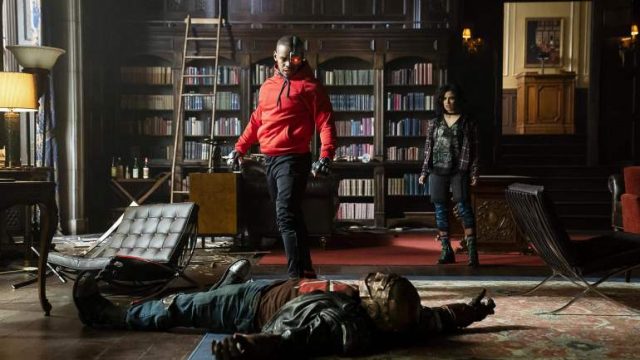 Despite that awesome payoff though, Doom Patrol couldn’t quite maintain its appealing genre balance in, “Therapy Patrol.” The episode heavily favoured drama and tragedy, which is fine on paper, but the storytelling also didn’t feel rewarding or intense enough to really merit such a heavy step away from Doom Patrol’s potent sense of humour. At least Cliff got a pretty standout story arc here however, and Jane and Larry took at least a few interesting steps forward, despite them being the two that most reject the idea of group therapy. That said however, Rita and Vic feel completely wasted in this episode, and the team’s group therapy effort doesn’t really yield as many startling revelations as it deserved to. At this point, the team has definitely spent enough time bumbling around and commiserating about Mr. Nobody and the missing Chief. It’s about time they picked themselves up and got back to embracing the weird, perverse world that they live in.