The dire state of New Seattle continues to get worse in the second part of iZombie’s two-episode final season premiere storyline. “Dead Lift” picks up where the season premiere left off, as Liv and Babineaux case a crime scene related to the missing girlfriend they’re after, only to discover that the woman is alive and well, and is simply cheating on her boyfriend with the accountant. Shortly afterward, Liv decides to cook a comforting dinner for Major, only to end up fully saddled with the fitness nut brains that she meant to share with him.

“Dead Lift” continues to expand upon just how bad human/zombie relations currently are in New Seattle, with the issue being compounded by just how fruitless Liv’s and Babineaux’s investigation keeps turning out to be. The investigation does end up going somewhere interesting later, though it would have been nice if Liv’s newest brain could have been properly put to use. This is one of those episodes where Liv simply gets put on a brain because it’s part of the show’s usual formula, not because the brain is actually useful during the case at hand. There’s even a joke about Liv’s kegel exercises being mistaken for a vision at one point, but that in turn draws attention to the fact that the brain is completely superfluous in this case. At least when Liv consumes the brains of murder victims, the visions can help her and Babineaux solve the case-of-the-week, but in this case, Liv was just on some rando’s brains for the hell of it, with only a few throwaway jokes being gleaned as a result. 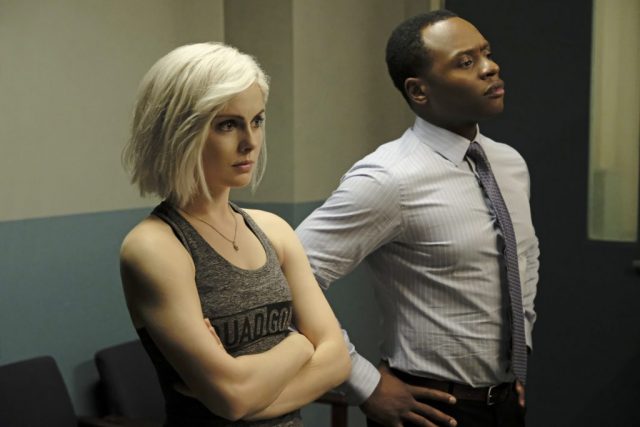 At the same time, Major continues to struggle keeping order at Fillmore-Graves, especially with the zombies under his command now being desperate to apprehend the parties responsible for the checkpoint explosion that occurred during the season premiere. The soldiers are rapidly losing faith in Major’s way of doing things, since Major refuses to adopt the more heavy-handed policies of the late Chase Graves, despite the increasing violence upon zombies in New Seattle. This comes to a boiling point when Jordan ends up being killed during an ambush as well, which results in Major having to overhear his soldiers mocking his seemingly human-sympathetic methods in the locker room. Major manages to take control of the situation, putting his soldiers in their place while also finding an appropriate way to honour their fallen comrade, but this difficult turn for Major does end up nicely going along with the core case-of-the-week, which ends up portraying a nice current events allegory through the current human/zombie conflict.

After Liv and Babineaux discover that every person who pinged off of the victim’s cellphone tower is alive and accounted for, the car from the attack is discovered soon afterward, with Ravi declaring that the ‘blood’ within it is actually corn syrup. That, paired with a wig that matches the victim’s hair, appears to prove that the video footage of the zombie attack on that human woman is actually fake, and is a hoax being perpetrated to stir up conflict between humans and zombies. This was actually a pretty inspired and surprising turn, one that mirrors the fake news issue of the modern era, and how it can be used to distort facts for both security and psychological warfare. The controversial decision of Major deciding to fake evidence right back, leading to false news reports that otherwise tell the truth about the attack video being a hoax, also presents a compelling slippery slope for down the line. Not only that, but it was also cool to see Liv and Babineaux inadvertently stumble across the fake victim during their investigation, a chatty divorcee with a taste for young, eligible men, who happens to be friends with Dolly. I wonder how that will come into play later?

The Seattle PD and Fillmore-Graves weren’t the only ones making big compromises in this episode as well. Peyton gets a subplot wherein she struggles with trying to improve human/zombie relations, even attempting to fruitlessly get the city’s two remaining city councilmen to agree on a PR strategy. After a tabletop RPG session, it’s Ravi that ends up coming up with the solution, presenting one of his RPG buddies’ human/zombie comedy sketches as a means of improving zombie PR both in and out of New Seattle. It’s hard to believe that this is the best solution on Peyton’s desk, but in any case, it is, and Peyton decides that the idea is a good one. Peyton also sets up her career to be destroyed in the process however, when she ends up selling the naming rights to the Space Needle in order to get the funding for the sketches, which is done illegally, thus guaranteeing that she’ll eventually lose her credentials with the city. This seems to foreshadow a bittersweet final resolution with Peyton’s character for iZombie’s series finale, but Peyton sacrificing what’s most important to her for the good of humans and zombies alike is nonetheless a big gesture, one that lets Peyton contribute to the good fight in her own way.

All the while, Liv’s coyote, Baron is also continuing to try and get the kids he’s attempting to smuggle into New Seattle, which breaks up the storytelling well enough, as this other party works their way into the zombie-controlled city. Right when it looks like victory is going to be achieved however, some vigilante border protectors appear, forcing Baron to hide the kids under a nearby car! Baron is killed during this attack, but the kids somehow make it into the city anyway, possibly with the help of Liv’s other coyotes off-screen. The kids are successfully turned into zombies, but seeing Liv’s Renegade operation also take a hit was a good way to keep the drama running high with Liv’s character, even as she spent most of this episode goofing off on her fitness brain. Liv’s Renegade arc is still trailing the others in terms of its depth and contribution to the overall storyline, but I suppose Liv’s Renegade business still mattered a little more in this episode than it did in the season premiere. 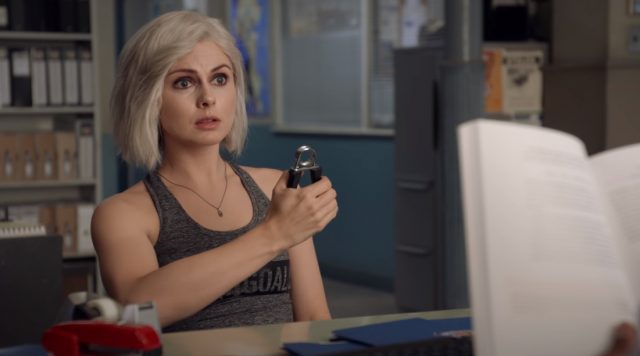 “Dead Lift” has to spend a lot of time with slow burn storytelling, but its payoff is well worth the wait. The video footage of the zombie attack being faked was a great way to keep playing with iZombie’s procedural format, even into the final season. Not only that, but the show’s leads having to cash in their integrity in order to even slightly improve human/zombie tensions was a morally interpretive gamble that keeps the storytelling plenty interesting. iZombie’s tone remains darker and more complex here than it was during earlier seasons, but this nicely highlights just how much the show has continued to push the scope of its premise with every new season, setting itself up to go out on a high note with its final batch of episodes, as the decisive conflict for the soul of New Seattle consistently threatens to spark. Now that the big two-part season premiere storyline is done however, it will be nice to spend at least some time going back to business as usual for iZombie, before New Seattle inevitably collapses into a brutal free-for-all that zombies likely stand no chance at surviving.

iZombie 5.2: "Dead Lift" Review
iZombie concludes its two-part final season premiere storyline to pretty good effect in, "Dead Lift", as the viral murder footage is revealed to not quite be what it seems.
THE GOOD STUFF
THE NOT-SO-GOOD STUFF
2019-06-17
87%Overall Score
Reader Rating: (0 Votes)
0%